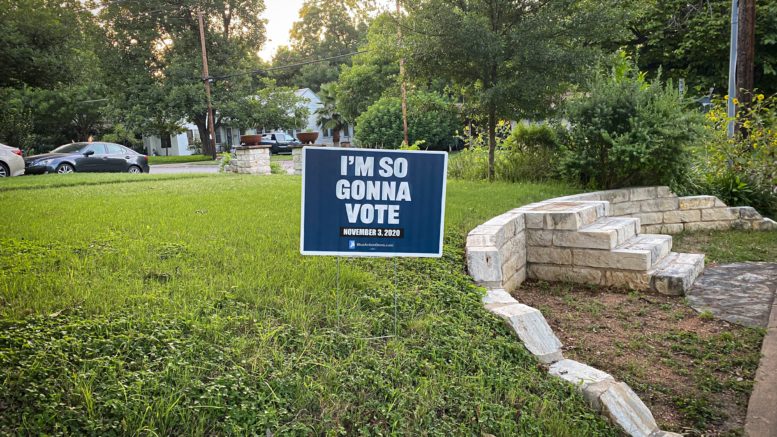 Photo by Kari Sullivan on Unsplash

Editor’s note: Voting early makes sense this election, but it can backfire when there’s a big campaign development

It’s a dilemma for voters, especially this election:

You want to get your ballot in early to make sure it’s counted.

But what if there’s a major development in a campaign that would have changed your vote?

It’s possible, for instance, that some early voters in South Sacramento—especially those struggling with skyrocketing rents—might regret their choice.

Les Simmons, who is running against Mai Vang in the Nov. 3 runoff for the District 8 City Council seat, had said he supported the local rent control measure.

But on Oct. 15—a week after voters started receiving ballots and filling them out—his campaign said he actually opposes the measure and instead supports the rent control ordinance passed by the council last year. And campaign finance reports were filed showing that independent expenditure committees funded by the California Association of Realtors and National Association of Realtors had spent more than $75,000 in support of Simmons and against Vang.

On Monday, Vang sent out a new appeal to supporters, asking them to pass out fliers and door hangers the final two weekends before Election Day. In the March primary, Vang led Simmons by nearly 1,400 votes of the total 9,911 cast in the five-candidate field.

There’s a long history of the “October surprise”—the last-minute scandal or change in a campaign that flips votes. Sure, some are unfair or untrue, but others are legitimate reasons to decide differently. And in close races—particularly in local contests with fewer votes—it’s conceivable that those votes could have changed the outcome.

There may be a bigger risk of that happening in 2020.

Due to the COVID-19 pandemic, this is the first time all 22 million California voters are getting mail ballots, which they received a month before Election Day and are being encouraged to return early.

And with President Trump spinning conspiracy theories about mail ballots and concerns about the U.S. Postal Service, you can’t blame voters for getting them in as soon as possible.

UPDATE: Nationally, as of Oct. 25, more than 58 million votes have already been cast, more than the total number of early and mail-in votes in 2016, according to the Associated Press.

UPDATE: In California, as of Oct. 24, nearly 7 million ballots, or 31% of those sent out, had been returned.

Elections officials can start processing—though not actually counting—ballots as soon as they arrive. So the more early ballots are returned before Nov. 3, the earlier the winners can likely be declared.

Secretary of State Alex Padilla, the state’s top elections official, emphasizes the upside of the historic wave of early voting. “More Californians voting early will mean a safer Election Day for everyone—voters, poll workers, and elections officials alike,” he said in a statement.

Early voting will reduce lines on Nov. 3, and free poll workers to help those with disabilities or who need language assistance or to register to vote. (Monday is the last day to register to vote and ensure a mail ballot arrives before Nov. 3. After that, voters must complete “same day” registration in person at voting sites.)

Mindy Romero, founder and director of the Center for Inclusive Democracy at the USC Price School of Public Policy, said with so much focus on the presidential race, it’s understandable that people want to vote early, if only to alleviate their anxiety and express themselves: “I did it. I had my say.”

While voters aren’t likely to change their mind for president, Romero said, the downside is that there could be an “October surprise” in statewide and local contests. “It could impact an election more,” she said.

But, she said, since most voters care much more about the presidential race than any other contest, she doesn’t expect that many will have “buyer’s remorse.”

Kim Alexander, president of the California Voter Foundation, pointed out that one problem won’t be as bad as for the March primary: While 20 Democratic presidential candidates were on the ballot, all but five dropped out before March 3, including Pete Buttigieg, Amy Klobuchar and Tom Steyer in the final days. Combined, the candidates who had withdrawn won more than 10% of the nearly 5.8 million total votes in the Democratic primary.

Alexander also said for early voters, it’s okay to skip contests—some complicated issues among the 12 statewide ballot measures, perhaps—if they aren’t sure how to vote.

She plans to wait to vote until Oct. 27, which she calls the “sweet spot” that provides time to gather information and still be confident a mailed ballot will arrive in time.

“That way,” she said by email, “I have some time to do some more research and still get my ballot in on the early side so that it will be among the first ballots to be counted.”