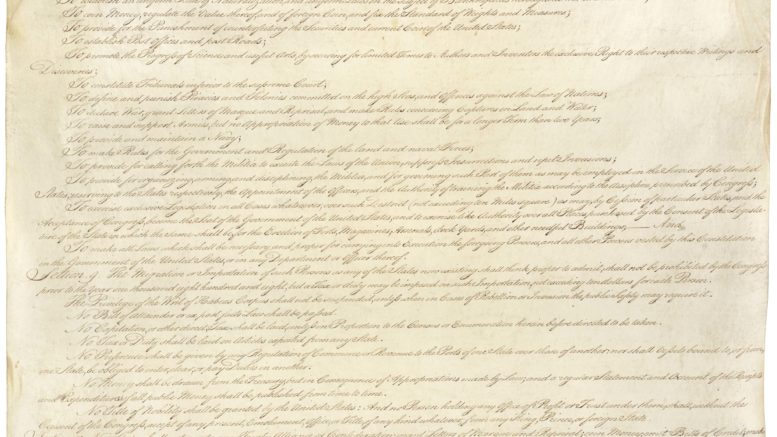 Article II of the Constitution includes impeachment. (Photo courtesy of the National Archives)

SN&R asked the Sacramento area’s House Democrats for statements on where they stand on starting impeachment proceedings against President Donald Trump.

After reading the Mueller Report and watching special counsel Robert Mueller’s testimony before the House Judiciary and Intelligence Committees, it is clear to me that President Trump has committed impeachable offenses and went to great lengths to commit obstruction of justice on multiple occasions. Further concerning is that the Russian government interfered in the 2016 presidential election in order to help elect Donald Trump, and the Trump team welcomed their help.

The House Judiciary Committee, the committee with jurisdiction over impeachment proceedings, has already been conducting important and necessary oversight, including leading an investigation and holding hearings into obstruction, corruption and abuse of power by President Trump. I have supported the committee’s actions and will continue to do so.

If the Judiciary Committee believes that a formal impeachment inquiry strengthens their hand to prevent the president’s ability to circumvent those investigations, I would support an impeachment inquiry. Regardless, I will continue to support the current process of congressional committees conducting oversight, following the facts and building the case to the American public.

Congress has the constitutional authority to hold the president accountable for his actions. I am confident we will do so.

The Mueller report and testimony offered 10 clear instances of possible obstruction of justice by this president and his administration. Congress has a responsibility under the Constitution to investigate such matters and, if necessary, file articles of impeachment against the president.

Now that special counsel Robert Mueller has filed his report and testified before Congress, I believe the next step is for Congress to undertake an impeachment inquiry—similar to a grand jury investigation. That will allow us to vet the information outlined in the Mueller report and decide whether we want to proceed with a formal impeachment resolution. There are too many credible allegations of wrongdoing against the president to brush this issue under the table. The House will fulfill its oversight responsibilities and determine whether the president has committed high crimes and misdemeanors worthy of an impeachment.

The foundation of American life begins and ends with the rule of law and the power to shape your government. From the moment Donald Trump announced his presidential run, he has actively undermined both of those societal pillars.

Through Special Counsel Mueller’s report and testimony, we learned Russia interfered in our election to help Trump. We learned his campaign made numerous contacts with Russian operatives. The campaign welcomed that help, and no one on Trump’s campaign reported these contacts to the FBI or CIA. And when an investigation into foreign interference was underway, President Trump directed members of his staff to obstruct and cover up, which leaves us with little choice but move forward with impeachment proceedings, which will legally compel he and his confidants to cooperate.

No one, including the president, is above the law. Every American should be concerned by his actions, which unravel trust in our elections, judicial system and law enforcement community. I voted to block Republican efforts to shut down an impeachment inquiry before one even began. An impeachment inquiry may be our last best tool to get the answers we need to protect the security of our democracy and next presidential election.

This president was elected under a cloud of accusations, with some claims that have yet to be resolved. Since coming to office, he has flagrantly disregarded both ethical and legal standards and protocols. His abuse of executive privilege has been used as a shield, stalling Congress from exercising our constitutional authority and obligation to conduct oversight.

I have long supported congressional investigations undertaken by the appropriate committees, and I support Chairman Nadler’s decision to open a formal impeachment inquiry. Americans deserve to know the truth, and many are gravely concerned by the president’s dubious actions. By following this deliberative process, the Judiciary Committee’s inquiry will be a transparent and thorough examination of current evidence. These proceedings will answer questions that are critical to determining if impeachment is necessary.

Cartoon: No stopping the mail

Be the first to comment on "Where they stand on impeachment"