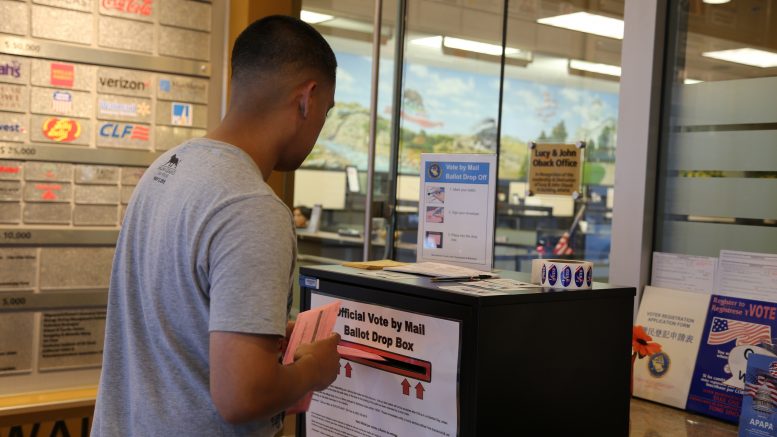 Editor’s note: With more mail ballots and a new law for the pandemic, the vote count will take even longer for Nov. 3 election

California is notoriously slow counting all the ballots and calling final election results. This November will likely take even more time with a record avalanche of mail ballots expected during the COVID-19 pandemic.

That’s the message officials are already trying to get out in hopes of avoiding confusion and concern among voters leading up to Election Day and beyond.

Worries are particularly high in the presidential race, in which many more Republicans are expected to vote in person and more Democrats by mail. Experts say that scenario could create a “red mirage” the night of Nov. 3, when President Trump could take the lead in battleground states—then generate a “blue shift” in the days, and even weeks, afterward as mail-in votes get counted. President Trump—who is already railing against mail ballot fraud and a spinning conspiracy theories of a rigged election—could declare victory prematurely. And that could create a constitutional crisis if Democrat Joe Biden eventually—and actually—wins.

On Sept. 23, Trump refused to commit to a peaceful transfer of power and said mail ballots should be thrown out. He’s also admitting he wants to quickly put his nominee to replace the late Ruth Bader Ginsburg on the U.S. Supreme Court in case it decides a contested election. His statements are increasing fears that Trump will refuse to concede if he loses.

On Sept. 22, the FBI warned that foreign groups and cybercriminals could capitalize on delayed results due to more mail-in ballots to spread disinformation that “that includes reports of voter suppression, cyberattacks targeting election infrastructure, voter or ballot fraud, and other problems intended to convince the public of the elections’ illegitimacy.”

To a lesser extent, similar reversals could happen in close congressional races, statewide ballot measures and local contests. It happened in November 2018, when Democrats took control of the U.S. House and flipped seven seats in California, including several late-declared wins.

Sacramento County’s elections office says it typically reports all mail ballots received before election day right when the polls close, and it pushes early voting so the initial returns are more accurate.

But it also tries to make clear that election night results are not final—and will reinforce that message even more this year.

UPDATE: In a report to the county Board of Supervisors for their Tuesday, Oct. 6, meeting, Courtney Bailey-Kanelos, the county registrar of voters, points out that ballots postmarked by Nov. 3 that arrive as late as Nov. 20 will be counted and that long lines are expected on Election Day due to social distancing in vote centers.

With those factors, she warns, “we anticipate final results to be delayed even more than in past elections.”

The California Secretary of State’s office is focusing more on informing the public about the vote counting process, including with a series of short videos on social media before the March primary.

On election night, it is now saying “precincts partially reporting” on its results website. And after the election, it is replacing the percentage of precincts counted with a graphic that shows how many days are left to canvass the vote.

Historically, California emphasizes voter participation over fast results. More so than many other states, California makes it easy to register and vote, lets voters decide policies through ballot measures and goes to great lengths to count every vote. That means longer ballots and more votes to count.

At the same time, the number of mail votes in California has been rising, especially since the Voters Choice Act in 2016 allowed counties to vastly expand the system. In November 2018, 65% of California voters cast their ballots by mail. That rose to 72% in the March primary.

In Sacramento County, 91% of voters put their ballots in the mail or in drop boxes in November 2018, as did 89% in the March primary.

Under a new state law passed during the pandemic, every registered voter in the state—a record 21 million as of earlier this month—will get a mail ballot next month. As long as they are postmarked by Nov. 3, the ballots will be counted even if they arrive as late as Nov. 20—17 days after election day, compared to three days in previous elections.

The new law also allows county elections officials to start processing—though not actually counting—mail ballots on Oct. 5, 29 days before the election, compared to 10 days under the previous law.

The law doesn’t change that counties have 30 days after the election to certify results.

“Young voters have several factors working against them. They are new to voting, less familiar with the U.S. Mail and lack experience making a signature.”

According to two new studies out this week, younger and newer voters may not be as ready for the greater emphasis on voting by mail. “It shifts responsibility for getting it right from poll workers to voters,” says Kim Alexander, president of the California Voter Foundation.

In Sacramento, the most common reason for ballot rejection was the signature on the ballot not matching the one on file, while in Santa Clara and San Mateo it was the ballot arriving late.

“Young voters have several factors working against them,” Alexander said in a statement. “They are new to voting, less familiar with the U.S. Mail and lack experience making a signature.”

So despite COVID-19, a bigger share of younger voters said they prefer to cast their ballots in person this November than other age groups, but nearly 45% of them don’t know or aren’t sure where to find information on polling places, according to another study released Monday, this one by the Center for Inclusive Democracy at the USC Price School of Public Policy.

That study also found that while 42% of California voters say they prefer to vote by mail this election, 31% prefer to vote in person and another 17% want to drop off their mail ballot in person.

Though 14% said they were concerned about contracting COVID-19 while voting, 12% were worried their ballot wouldn’t be counted and 10% were concerned they would not get their ballot. And that was before the headlines of the Trump-appointed postmaster general undermining the U.S. Postal Service and warning of mail ballot delays.

The study’s authors say the findings show the need for in-person early voting sites and clear messaging to voters about all their options. All California voters—young and old—can also sign up for mail ballot tracking to make sure it arrives in time and gets counted.

It shouldn’t be controversial for every vote to be counted. But this election, that’s one more thing to worry about.