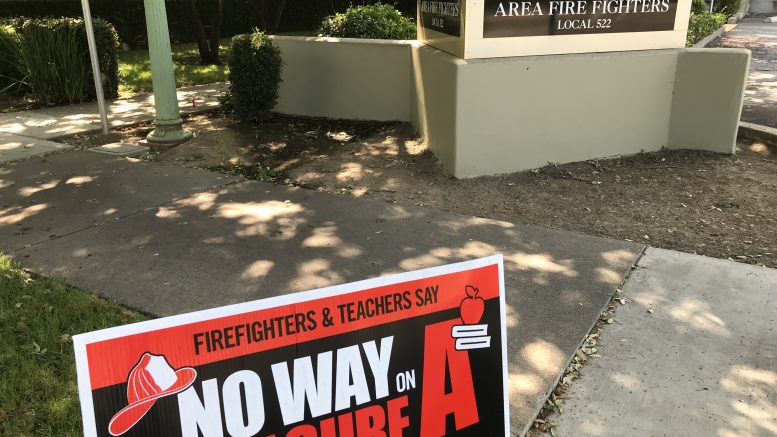 The Sacramento firefighters union is opposing Measure A for “strong mayor.” (Photo by Foon Rhee)

Editor’s note: Most groups are on same side on strong mayor and rent control, but Sacramento voters who split their ballot may decide outcome

Policy-wise, they are two separate issues about Sacramento’s future—one on how much power the mayor should have and the other on how much protection renters need.

But politically, it makes sense that many interest groups have lined up on the same sides for and against Measure A (strong mayor) and Measure C (rent control) on the Nov. 3 ballot.

Most neighborhood groups, activist organizations and the Democratic Party of Sacramento County are against the Sacramento Mayoral Accountability and Community Equity Act but for the Sacramento Community Stabilization and Fair Rent Charter Amendment. Some groups have banded together as the Sacramento People’s Campaign, using the hashtag #PeoplePower on social media, and have created the Sacramento Voter Project, a joint campaign fundraising committee.

On the other side, many business groups, some civic and labor leaders and most City Council members are for the strong mayor measure but against stricter rent control. For instance, the California Association of Realtors has donated $67,500 so far to the anti-rent control campaign and has also given $25,000 to the pro-strong mayor effort.

Many voters will likely cast their ballots the same way, especially those who favor rent control and oppose strong mayor.

But if the results are close, the outcome could be decided by how many voters support both strong mayor and rent control, or vote against both measures.

I know of at least a couple of voters in that latter category.

City Councilman Allen Warren, who is in a Nov. 3 runoff for his District 2 seat, signed official ballot arguments against rent control and against strong mayor.

He says it’s not mostly because both measures would take away some power from the council. Rather, Warren argues that Measure A was rushed on to the ballot and there can’t be a full campaign during the pandemic and that the social equity provisions are being used as leverage. And he says that Measure C would put Sacramento at a disadvantage in attracting private money to build more affordable housing.

Fellow Councilman Jeff Harris has similar reasons for signing the ballot argument against strong mayor, which he calls an ill-timed power grab, and opposing the rent control measure, which he says will scare off affordable housing developers.

On the other side, Les Simmons, who is in the runoff for the District 8 council seat, supports strong mayor, partly due to the racial equity provision and the $40 million set aside for inclusive economic development. He also backs the rent control measure, saying he often get calls from tenants who can’t afford their rent or have a problem landlord.

“Last year the City Council passed an historic rent control measure, worked on with all stakeholders at the table, from housing advocates and renter groups to labor, realtors and apartment owners,” the statement said. “He believes what the proponents of Measure C are doing is breaking their word and undermining efforts to build more affordable housing in the city. The way to bring rent prices down is to build more affordable housing and that’s what Les believes we should be focusing on.”

Ten days after Mayor Darrell Steinberg persuaded the council to put his strong mayor plan before voters, the rent control measure got on the Nov. 3 ballot at the last minute and under court order.

That complicates matters for the mayor, with rent control likely bringing out more voters who will also oppose strong mayor.

Steinberg says while it may appear that way, he doesn’t believe that will happen once the campaign educates voters that strong mayor is a pro-equity measure. For the measure to pass, he needs to be right about that.