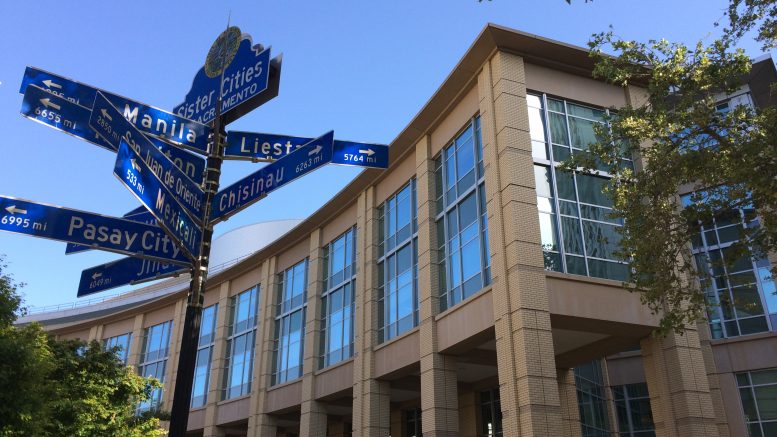 Sacramento’s latest “strong mayor” plan is headed for the Nov. 3 ballot, but the opposition will rise, pandemic or not.

On Aug. 4, the City Council voted 6-3 to call an election on the city charter change, proposed by Mayor Darrell Steinberg.

Council members Angelique Ashby, Eric Guerra, Steve Hansen, Rick Jennings and Jay Schenirer joined Steinberg in putting Measure A before voters. Councilmen Larry Carr, Jeff Harris and Allen Warren voted “no.” None have to face the voters again until at least 2022, except for Warren, who is in a November runoff to keep his District 2 seat.

After hearing concerns from council members at the July 28 meeting, Steinberg added a two-term limit for the mayor and a 10-year sunset clause. If the measure passes, Steinberg, who won a second term in March, would have the additional power for only four years. The measure would go back before voters by 2030.

But Steinberg refused to split the “strong mayor” and social equity provisions of the Sacramento Mayoral Accountability and Community Equity Act of 2020 into two separate measures, as demanded by community activists who accused the mayor of holding the equity proposals hostage.

To prove he’s serious about equity, however, Steinberg pledged to bring the provisions before the council in as soon as 30 days so they can be voted on as ordinances, as “strong mayor” opponents have urged.

That way, he said, voters can see progress on the equity pieces, then make them a permanent part of the city’s DNA by approving the city charter change in November.

But that’s a tactical risk: What if voters decide having equity in ordinances is enough? Couldn’t they then reject the “strong mayor” changes by defeating the measure?

Besides that risk, the measure will face well-organized and loud opposition, led by community activists and by incoming Councilwoman Katie Valenzuela and Mai Vang, who is in a November runoff for the District 8 seat to succeed Carr. “We are stronger without strong mayor. Onward to November,” Vang tweeted right after Tuesday night’s vote.

The opposition got a powerful ally when the city firefighters union announced Aug. 6 it is against the measure, though not for all the same reasons as the community activists.

Also leading the charge will be neighborhood leaders who have successfully fought previous attempts at strong mayor. In 2014, 56% of Sacramento voters rejected then-Mayor Kevin Johnson’s bid.

Steinberg, however, says recent polling shows it has a good chance in 2020. He and his business and labor backers say it’s clear that the mayor needs more authority after the police reform protests and the COVID-19 economic crisis further exposed inequities in Sacramento—and a governance structure unable to fully meet those challenges.

“My goal is for Sacramento to be equipped to respond in the most focused and aggressive way to the three great challenges we face: recovering economically from #COVID19, alleviating systemic racism and inequity, and addressing homelessness and the lack of affordable housing,” he tweeted after the vote.

And the strong-mayor cities of Los Angeles ($150 million in a July 1 vote by the city council) and San Francisco ($120 million proposed by Mayor London Breed) have moved faster than Sacramento in shifting money from police to communities of color, as also demanded by community activists leading the local “Defund the Police” movement.

Still, some opponents say it makes no sense to rush such a fundamental change—the plan was first made public July 23—during a public health crisis. “There is no urgency to add this to the ballot and have this ‘political fight’ while people in the city are fighting for their lives, their jobs, their homes and their kids’ education,” the League of Women Voters of Sacramento County told the council.

Steinberg responds by saying that the city can do more than one thing at once—tackle coronavirus while still having a robust campaign. “It is never the wrong time to do the right thing,” he said.

Under the proposed “strong mayor” charter change, the mayor would appoint the city manager, with confirmation by the council, and could also remove the manager. If the manager is not removed for cause, the council could block the dismissal on a two-thirds vote.

The mayor would propose a budget and could veto line items in the budget, as well as ordinances, subject to an override by a two-thirds vote of the council. With the mayor no longer on the council, a ninth council district would be added in the 2022 election after the 2020 Census and redistricting.

The proposed measure would also require the city to evaluate the impact of budget actions and ordinances on promoting racial, ethnic, gender and LGBTQ equity and on helping small businesses. And it would require that the city invest $40 million a year in left-behind neighborhoods, as pledged in the Measure U half-cent sales tax increase approved in November 2018. At least 25% of that money, or $10 million, would be for children and youth impacted by poverty and violence.

Critics, however, say the $40 million set-aside is reckless ballot-box budgeting, while others say that Steinberg is trying to “buy” votes again in Black and Brown neighborhoods. And the council ignored a plea from youth advocates to require that the $10 million is new spending; otherwise, Youth Forward said, “the measure continues the city’s existing pattern of underinvesting in prevention and youth and overinvesting in police and fire.”

It’s also worth noting that Steinberg helped defeat Measure G on the March ballot, which would have changed the city charter to guarantee 2.5% of unrestricted general fund revenues for youth programs—estimated at that same $10 million. He instead proposed a more limited version, which would have set aside about $3 million, for the November ballot. But Youth Forward and other proponents balked, and that measure was put off until at least 2022.

The firefighters union warns that the $40 million carve out will put fire and emergency medical response at risk of “dangerous reductions.” It joined Steinberg in opposing Measure G and says it’s “ironic” that the Mayor “has flipped the script with his ‘Strong Mayor’ proposal and will do just what he opposed with Measure G.”

In its Facebook post announcing its opposition, Sacramento Area Firefighters Local 522 also echoed others’ arguments that the charter change was rushed through with “almost zero public input” and that because of the pandemic there will be very little opportunity for the public to meet and debate the measure.

“It is time to stop the power grab, stop with the distractions, stop with promises that will not be delivered and work collaboratively with City leaders to find solutions that will drive our whole community positively forward into the future,” the union said.

It appears the strong mayor measure will share the local Nov. 3 ballot with a rent control initiative sought by tenants’ rights groups, which would impose a stricter limit than the one the council approved last year. A state appeals court judge ruled Aug. 12 that it must go before voters, overruling a Superior Court judge.

There is also a technical change to the new citizens redistricting commission forced by a coronavirus-related delay in completing the 2020 Census. And the council rebuffed calls from police reform advocates for a charter change to end binding arbitration in police and fire union contract disputes.

While there are still two months until mail ballots go out and early voting begins, many of the arguments on “strong mayor” are already clear.

Opponents say that council members and Sacramento’s neighborhoods will have less influence, while developers, unions and special interests will have more power at City Hall. They also say that there’s a danger of a mayor who is either corrupt or does not represent the city’s priorities and values.

“It is a power grab, plain and simple,” says the official ballot argument, signed by Carr, Harris, Warren, former Mayor Heather Fargo and Suzi Bakker, president of the League of Women Voters of Sacramento County. “More power will not make the Mayor more effective in solving city problems. More leadership and collaboration with the City Council will.”

UPDATE: But in their rebuttal argument filed Aug. 17, supporters say “strong mayor” will not harm neighborhoods. “In these changing times, this system is too slow and does not respond to the rightful demands that we address the challenges of all our neighborhoods, especially those still left behind,” they say.

Supporters also say the governance changes will let the mayor act faster and cut through the bureaucracy, and allow the city to better compete for federal grants and recruit businesses.

“Sacramento needs an accountable leader who is empowered to act in times of emergency, who has the ability to implement reforms when change is needed and who can fight for budget priorities that advance equity and economic progress,” says their official ballot argument, signed by Ashby as well as Chet Hewitt, co-founder of the Build.Black coalition; Cody Bik, board member of the Sacramento Sierra Building and Construction Trades Council; Jim Gonzalez, chairman of the Latino Economic Council of Sacramento; and Cassandra Jennings, CEO of the Greater Sacramento Urban League.

UPDATE: But the rebuttal argument filed by opponents Aug. 17 says that the measure allows “backroom decisions” and will not “fulfill the broken promises of Measure U.”

And Harris warns that because of the COVID-19 recession, even if Steinberg has more power next year, he may not have the money to do very much with it.

It may turn out that the timing was all wrong after all.