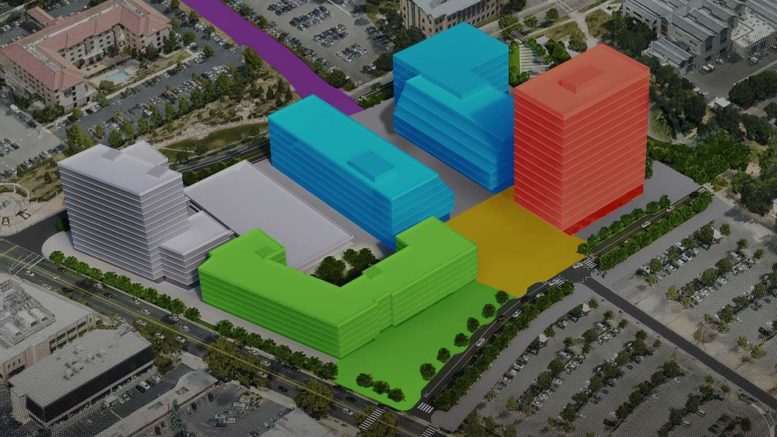 The promise and pitfalls of Aggie Square in Oak Park

The housing crisis came for Tanya Faison on Dec. 13.

That day, the founder of Black Lives Matter Sacramento received a 60-day notice from her landlord to vacate the three-bedroom home with $1,250 monthly rent that she’d lived in for nearly four years near central Oak Park.

These days, either selling or raising rent is common in Oak Park, which has been a flashpoint in Sacramento’s housing crisis. Already, wholesale gentrification has occurred in north Oak Park, where homes sell for an average approaching $450,000. Central and south Oak Park have remained more affordable, though the gap is closing, with residents like Faison being displaced.

Now, an ambitious project touted by local leaders might push housing costs in Oak Park and surrounding areas even higher.

Aggie Square—a public-private partnership announced in 2018 between the city, UC Davis Health, private industry and other groups—could bring thousands of jobs related to health care, technology and research. Leaders hype the possibilities of Aggie Square, which could total more than $500 million of investment and feature research for cancer, autism and Alzheimer’s disease.

It’s planned for 12 acres at UC Davis Medical Center near north Oak Park and Elmhurst, and ground could break on the first phase of construction as early as next year.

But neighborhood representatives and activists including Faison have concerns that the project could also bring more detrimental impacts.

City Councilman Eric Guerra, whose district is directly east of UC Davis Med Center, said that the COVID-19 pandemic and the protests following the death of George Floyd have changed the conversation around Aggie Square.

“Income inequality and racial equity is all involved in this because if you look at the demographics of the community surrounding Aggie Square, it’s very diverse,” he said. “And if those communities don’t feel they’ve got a shot at the American dream when something’s being built right in front of them, then it’s a false promise.”

Michael Blair has seen both the good and bad of gentrification in Oak Park. Blair, the founder of South Oak Park Community Association, paid $120,000 for his house 16 years ago.

Blair has seen some benefits as property values have risen in his neighborhood. The 40 Acres complex at 34th Street and Broadway in north Oak Park opened in 2010 and is part of a bustling commercial district.

“With gentrification comes the safety and that’s the positive part,” he added. “But then there’s the negative piece as well, whereas you don’t know the faces, the community changes. People with longtime legacy, standing in the community are forgotten.”

Blair, who serves on an Aggie Square advisory council, is concerned that the project will cause further gentrification in Oak Park.

“I’m not confident that it won’t,” he said. “I think it will. I think any improvement you make in this area is going to cause some level of gentrification.”

“I think any improvement you make in this area is going to cause some level of gentrification.”

The mood has been mixed at community forums that Oak Park Neighborhood Association has held about Aggie Square in January 2019 and last month, said Adrian Rehn, the association’s vice president.

“I’ll say there’s some people in the community who are very excited about this community amenity that is going to be built on the border of Oak Park in the next few years,” he said. “And then there’s others who are very concerned about the gentrification and the potential displacement that it may cause.”

The roots of housing inequity in Oak Park date to the middle of the 20th century, when racial covenants and mortgage redlining helped transform the neighborhood. Oak Park went from 6.5% non-white in 1950 to 48% non-white in 1970, according to a 2009 article in the International Journal of Urban and Regional Research by UC Davis researcher Jesus Hernandez.

“Fears of high risks for lenders, based on the area’s rapidly changing demographics, led to a systematic disinvestment by ﬁnancial institutions from older inner-city communities,” wrote Hernandez, who declined to be interviewed.

That disinvestment later led to financial opportunity in Oak Park. Faison cited work that began under former Mayor Kevin Johnson, who owned numerous properties in the neighborhood, as well as banks and real estate companies that snagged homes at rock-bottom prices after the 2007-09 recession.

Rehn said the three-bedroom, one-bath house that he shares with two roommates in north Oak Park sold for $90,000 in 2009. Today, it’s worth more than three times as much.

“If you were to look at housing costs and housing prices four years ago in central and south [Oak Park], I think you’d be even more shocked,” he said.

David Yoakley Mitchell, operations director for the Atlanta Preservation Center, said Tech Square has been positive for many people. But it’s helped signal the change in downtown Atlanta, too.

“So much of the residential spaces of downtown Atlanta have been replaced with businesses,” Mitchell said.

Mitchell’s group lamented the near-demolition of the historic Crum & Forster Building, with only its facade remaining. “Once they’ve decided they gonna do something, they gonna do it,” he said.

Broome, who went on a 2017 trip to Atlanta with local leaders including Steinberg, said he didn’t see displacement of residents around Tech Square. He said his group fought to locate Aggie Square in Oak Park—not the railyards north of downtown or the former Sleep Train Arena site in Natomas, where others wanted it—because of the jobs it can bring.

But to Fabrizio Sasso, executive director of the Sacramento Central Labor Council, gentrification and displacement of people are inextricably linked.

“I don’t know of a project or an area in cities that I’m familiar with that have been gentrified that need not include displacement,” Sasso said. “I’d like to see what their plan for that looks like, because I don’t think that one can happen without the other.”

And he sees potential for displacement with Aggie Square.

“We know what this brings,” Sasso said. “And how the city responds, that’s what we’re going to be looking at.”

There does not appear to be a consensus on the impact of Aggie Square.

Steinberg said he refuses to accept that there must be a choice between economic development and affordable housing.

“We must have both,” the mayor said. “And I’m aware of the risks or the threat of gentrification as we aggressively build more economic and job anchors in the our community. But we are just as aggressive.”

He pushed the City Council to vote in January to create an $100 million affordable housing trust fund, using some money from the Measure U sales tax increase that voters approved in 2018.

Broome said the construction of 2,500 units of housing “would be enough to avoid any potential displacement due to Aggie Square.” Guerra noted that more than 100 vacant parcels have been identified along Stockton Boulevard.

But there’s some question of how far funds might go. Steinberg noted at a Feb. 6 program hosted by the Urban Land Institute that each unit of affordable housing costs an average of $400,000 to construct. That would equal only 250 units from the $100 million, but the mayor is proposing that 30% of all affordable housing the city helps fund should cost less than $100,000 in public money.

“We need an efficiency housing revolution in California, and I’m talking about quality housing,” Steinberg said. “But housing that is smaller, less expensive, easier to manufacture. We have a single housing prototype and wonderful for the people who are lucky enough to win the lottery and I mean the housing lottery.”

So far, however, collaboration hasn’t exactly been smooth, with officials and residents clashing on plans to ensure the neighborhood benefits from the project.

A group connected to the California Endowment’s Building Healthy Communities initiative, known as Sacramento Investment Without Displacement, has been working on a legally binding community benefits agreement for Aggie Square.

A January draft of the agreement called for local hiring from nearby zip codes, anti-demolition policies to protect homes and enrollment of at least 50% of Medi-Cal recipients living within five miles of Aggie Square.

Gabby Trejo is executive director of Sacramento Area Congregations Together.

“We want to see Aggie Square be successful,” said Gabby Trejo, who has been working on the agreement and serves as executive director of Sacramento Area Congregations Together. “We believe that this project has a lot of potential to be successful. But it also has a lot of potential to displace working families. And we want to make sure that working families in our region are protected.”

City leaders have yet to commit to a community benefits agreement, however. Guerra and Councilman Jay Schenirer, who didn’t respond to a request for comment, are instead working on a letter of intent, which city leaders declined to provide.

But Trejo and Sasso said the letter is insufficient. “We’ve seen other folks be bad actors in that things are promised and then they’re never delivered,” Sasso said.

UPDATE: At a Sept. 16 press conference, Sacramento Investment Without Displacement renewed its demand for a community benefits agreement. It called for neighborhood involvement, local hiring, affordable housing and health care and support and protections for local businesses.

UPDATE: On Sept. 17, council members Schenirer and Guerra released a joint statement saying that while Aggie Square could “generate billions of dollars and create over 9,000 jobs in Sacramento County,” there were also “challenges and impacts that must be addressed.”

The statement asked UC Davis and Wexford for “the formation of commitments” that demonstrate how the city and nearby neighborhoods “can directly benefit from the project.” While the statement mentione hopes for a “final agreement,” it didn’t include the phrase “community benefits agreement.”

Representatives for developer Wexford Science and Technology, which will retain ownership in the project once it’s built and lease space to UC Davis, weren’t available for comment.

Bob Segar, a planning director for Aggie Square and UC Davis, also stopped short of committing to a community benefits agreement, saying, “We need to take things issue by issue.”

But he said he cares about retaining the character of the local neighborhoods.

“It’s not trying to radically change the nature of neighborhoods,” Segar said. “It’s hopefully mapping that investment in a place that pretty much everybody’s agreeing can benefit from that investment.”

Dr. BJ Miller is the keynote speaker at an end-of-life conference this Friday in Sacramento

2 Comments on "Innovation without gentrification?"