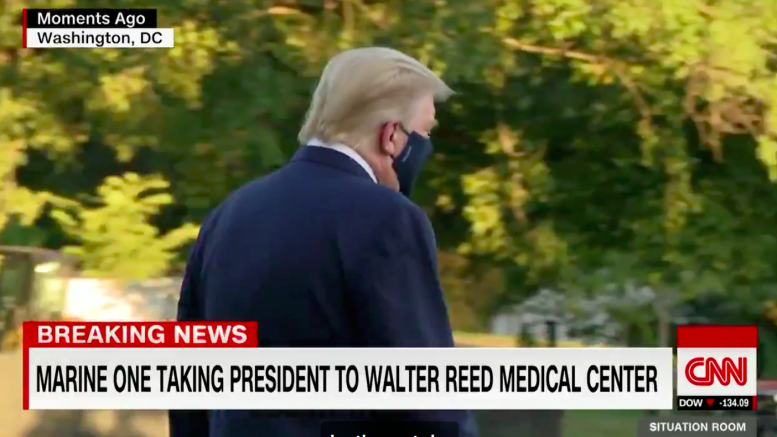 They didn’t know when they would be called upon, but they answered the call when it came.

No, not those nutball Q’Anon freaks or those limp-necked Proud Boys losers. We’re talking about the Twitter army, who met the breakneck developments about President Trump’s inevitable COVID-19 diagnosis and flight to Walter Reed with jaw-dropped shock, clear-eyed perspective and a surprising amount of restraint (for Twitter, anyway).

For a day, at least, entrenched thumb warriors reacted to the chaos threatening to tear apart the political fabric of this nation with a tired smirk and a gallows’ observation.

There was also plenty of searching skepticism, context sharing and no small amount of understandable Schadenfreude from folks who have watched 200,000 of their neighbors perish from a virus the president downplayed, diminished and disrespected.

Like his opponent, we wish Donald Trump a speedy recovery. Like the rest of this traumatized nation, we understand the mental health break of allowing each other an honest moment.

Here are some of the more memorable moments from the insane past 24 hours:

just thinking about the wall-to-wall coverage of Hillary having pneumonia and her fitness for the presidency. No reason

coronavirus stand back and stand by

Who needs insomnia Twitter when you live in Baltimore and there is a man on the street at 1:30 AM yelling “Trump got it!” .

Reading the news in 2020 counts as cardio.

I CANNOT WITH 2020 FOLLOWING THE THREE ACT STRUCTURE.

This is news hyperinflation. Journalists are wandering around with wheelbarrows full of news but it’s all worthless because it now costs one million news to buy a loaf of bread.

Trump’s cabinet just now trying to figure out how to put on masks.

The President now has a pre–existing condition and would be denied medical coverage under his own plan.

So the super-spreader event appears to have been the Rose Garden announcement of RBG’s replacement.

Hell of a dissent.

Think whatever you want but tweeting ill wishes or voicing a hope for his demise is likely the stupidest thing you can do right now.

People have been saying for years that when admin gets reputation for lying, that can really matter at crucial times.

But literally no one can believe such reassurance from McEnany, Meadows, Pence, Kudlow, Kushner, etc.

as long as he’s in good spirits im happy

Three points about these Biden remarks in Grand Rapids:
1) takes the high road — doesn’t mention Trump and WH aides exposing him and others to COVID19, just wishes him well;
2) focuses on his economic message;
3) wears a mask the whole time —