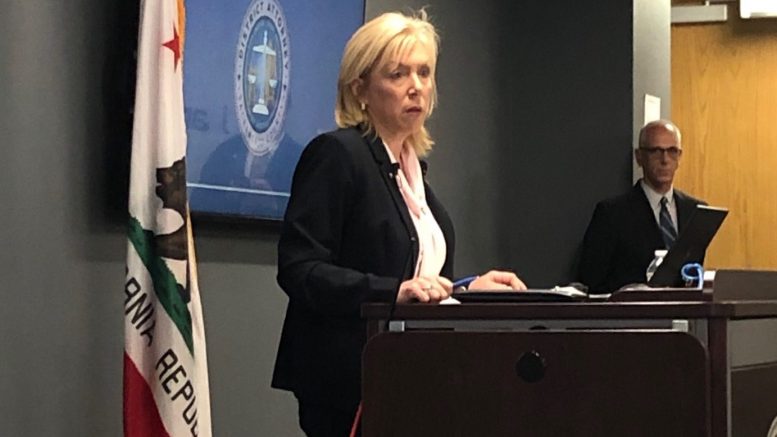 Sacramento County Sheriff Scott Jones and District Attorney Anne Marie Schubert wouldn’t appear on the ballot until 2022. But they’re angling to make sure they can raise and spend enough campaign cash if they seek to stay in office.

As of Jan. 1, a new state law limits individual contributions in city and county elections to $4,900 per primary, runoff or general election campaign. (When Assembly Bill 571 passed, the limit was $4,700; per the statute, the state Fair Political Practices Commission updated the amount, including for inflation.)

But the law lets local governments set a different limit—and Jones and Schubert have been pressing Sacramento County supervisors since May to do so.

UPDATE: On Dec. 8, however, the Board of Supervisors rejected a proposed ordinance requested by Jones and Schubert to set a limit of $25,000 per person or organization for each primary, election or runoff, and a contribution limit of $12,500 in years without elections.

Instead, supervisors agreed to let the state law take effect and directed officials to look at limiting how much candidates for sheriff and assessor can transfer from other campaign accounts.

The higher limit sought by Jones and Schubert would let them keep collecting large donations directly from law enforcement officials, groups, companies and interests that have supported them in the past. If there’s a March primary and a November runoff in 2022, the higher limit would mean a single person or group could give as much as $50,000 that year.

Supervisor Patrick Kennedy called those amounts “excessive.” “This is just so far off the mark,” he said.

Supervisor Don Nottoli pointed out that if the county set its own limits, it would have to bear the cost of enforcing them when balancing the budget will be difficult with the COVID-19 recession. By letting the state law take effect, enforcement would fall to the FPPC.

Schubert told supervisors that the higher limit would increase transparency because otherwise more money would flow into independent expenditure campaigns.

But the League of Women Voters of Sacramento County and California Common Cause urged supervisors to “stop the cash grab” by the district attorney and sheriff and argued that independent expenditure campaigns will happen regardless of the donation limit.

A coalition of community groups, including Organize Sacramento and Indivisible Sacramento, urged supervisors to let the state law take effect, or even pass an ordinance with a $1,500 limit.

The advocates pointed out that the campaign limits would be far higher than those for the state Attorney General of $7,800 per person and $15,500 for small political committees.

The community groups, which want more accountability and a change in law enforcement spending, said candidates for district attorney and sheriff should have to raise money from more people to be closer to their constituents. And they argued that when ordinary people are struggling to make ends meet during the COVID-19 recession, it’s unfair to give more influence to wealthy donors.

During a discussion Oct. 6, Nottoli highlighted that one person could give as much $87,500 over a four-year election cycle, while supervisors Sue Frost and Susan Peters voiced support for the ordinance.

On Oct. 6, Schubert told supervisors that she doesn’t like asking for money, but running a campaign, telling voters about her and correcting the record is expensive in a major county. She said she never thought she would have to raise $673,000 to first win election in 2010, or $939,000 when she won re-election in 2018.

Schubert said she’s not going to influenced by campaign donations. “I’m going to run for D.A., and I’m going to win,” she said.

Jones, first elected in 2010, told supervisors that while it’s technically possible that one person or group could donate $87,500, it’s unlikely.

“I wish I knew more donors like that, but I don’t,” he said.

Jones said he has no intention of running again, but he also said that in 2018. And since his last election victory, he has received $80,000 from the Sacramento County Deputy Sheriffs Association PAC, a past supporter.

Jones and Schubert have been among the biggest targets of Black Lives Matter and police reform protests. There have been calls on them to resign, and they could face strong challengers in 2022.

She raised eyebrows when soon after Stephon Clark was killed by Sacramento police officers in March 2018, she received $13,000 from two law enforcement groups for her re-election campaign. A year later, her office cleared the two officers. According to an analysis by The Intercept, as of April 2018, about $420,000 of the $1 million-plus in identified contributions for her three campaigns came from law enforcement sources.

Jones has raked in campaign cash from companies that receive or seek business with his department, as well as gun sellers who support his loose policies on issuing concealed carry permits.

The protests and their potential political troubles aren’t mentioned in the request Jones and Schubert made for special dispensation in campaign finance rules.

Instead, in a joint memo with county Assessor Christina Wynn, Jones and Schubert say their proposal is better for voters and taxpayers—and a matter of simple math:

The five county supervisors are limited to campaign donations of $1,200 per individual and $2,500 per group, plus eligible for $37,500 in matching funds. Each supervisor represents one-fifth of the county. So since the sheriff’s and D.A. offices are elected countywide, multiplying by five results in caps of $6,000 per individual and $12,500 per group and matching funds of $187,500.

“We believe establishing an overall limit of $25,000 per donor from any source and excluding matching funds for these three offices is a reasonable balance between running a meaningful campaign and not overburdening taxpayers with matching funds,” the memo says.

But those matching public funds don’t exist; they’re tied up in court and aren’t financed. So the higher limit is some fuzzy math.

Jones and Schubert also cite the Sacramento mayor’s office, which has limits of $3,500 per individual per election and $11,650 per political group and which represents about a third of the total county population. Those limits multiplied by three would be $10,500 per individual and $34,950 per group.

In a survey by the county clerk of other California counties of more than 1 million people, the donation limits proposed by Jones and Schubert are higher than those in Contra Costa, Los Angeles, Orange, San Bernardino, San Diego and Santa Clara counties. But Alameda and Fresno counties have higher limits.

In their memo, Jones and Schubert also emphasize that their offices haven’t been covered by campaign contribution limits until now and they are open to “undue influence.”

“Currently, a candidate for or office-holder in any of these offices can receive unlimited funds from any source—individuals, corporations, special interests, vendors with the County, out-of-state donors, associations, political parties, etc.,” the memo says. “In order to keep elections for these offices local, pure, and non-political, we believe reasonable contribution limits have to be established.

It doesn’t mention the new state law that sets the much lower limit. But it does warn of “the likelihood of shadow money or ‘independent expenditure’ campaigns that much smaller contribution limits would encourage.”