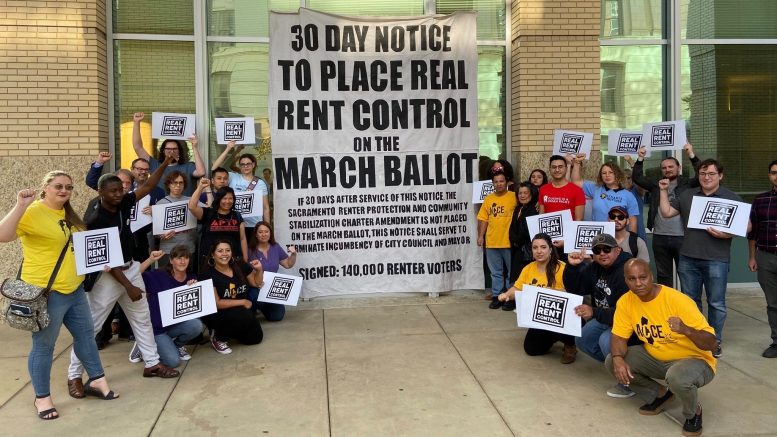 Supporters of a rent control initiative rally at City Hall to demand it be put on the ballot. (Photo courtesy of Yes on Measure C campaign)

During a town hall meeting that City Councilman Steve Hansen hosted on Sacramento’s affordable housing crisis at the start of 2017, Jonah Paul stepped up to a microphone and posed a question that was on the minds of his friends and neighbors: “Why can’t we have rent control in the city?”

“That would be really popular in the central city,” Hansen admitted from the stage. “But it might cause a lot of important building and economic activity to just move to other parts of the city where developers didn’t have to deal with it.”

Three years later, Hansen is a lame duck, defeated in the March primary by a candidate who made his opposition to rent control the focus of her campaign; grassroots coalitions supporting rent caps have been formed, broken apart and reformed; and city officials have been in and out of court trying to silence the voices of 44,000 Sacramentans who signed a petition to prevent rents from skyrocketing any higher.

Paul was volunteer organizer who had a front row seat for all of it. He is now tirelessly phone banking around an unexpected crescendo to the story: Thanks to a judge’s last-minute ruling, the ballot initiative to bring strong rent control to Sacramento—the measure that elected officials and wealthy special interest groups fought so hard to block from a public vote—is on the Nov. 3 ballot.

It’s called Measure C and corporate landlords and real estate groups are spending big to try to kill it.

Meanwhile, proponents are pointing to data they say refutes the main argument against rent control—that it will reduce investment in new local housing.

Mailers against Measure C have been flooding neighborhoods for weeks, some of which stress that Mayor Darrell Steinberg and the entire City Council oppose the amendment to Sacramento’s charter. Measure C would permanently cap annual rent increases directly at the consumer price index, between 2% and 5%. It would also ban no-cause evictions for all renters and establish an elected rental control board.

Steinberg and council members Jay Schenirer, Rick Jennings, Eric Guerra and Allen Warren have put their names behind the official argument against it. They claim the measure undermines a lesser, temporary rent cap that Steinberg and Hansen negotiated in 2019, the Tenant Protection and Relief Act; that its elected rent board adds another layer of “bureaucracy” to city government; and that it will disincentive new, badly needed housing development.

An SN&R analysis of campaign finance disclosures shows Steinberg, Schenirer and Jennings have each accepted tens of thousands of dollars in campaign contributions from developers and real estate companies that openly oppose rent control. Warren, who’s mainly self-funded, is himself a housing developer.

City filings show the Measure C opposition had raked in nearly $617,000 in cash and in-kind contributions by Sept. 19. On Sept. 23, the National Association of Realtors, based in Chicago, dumped another $250,000 into the effort to stop Measure C. On Oct. 1, the California Association of Realtors Issues Mobilization PAC put in $100,000.

But Paul and other proponents believe they have a powerful weapon of their own—the reality of the COVID-19 pandemic and economic collapse, which has now left thousands unable to pay rent. They also have at least one study to refute what they view as the most toxic talking point about the measure. In 2018, the Bay Area nonprofit Urban Habitat studied several data points, including figures from the National Apartment Association, and found that the cities of Berkeley and Santa Monica, which have had strong rent control for 30 years, did not suffer a lack of new housing development.

For Paul, it’s all about one final, volunteer push against big money. “It’s swimming upstream when you’re in the rapids,” he said of the funding disadvantage. “Some of us have been working so hard that it feels like our lives are over, but a lot of peoples’ lives are over if we don’t pass this thing.”