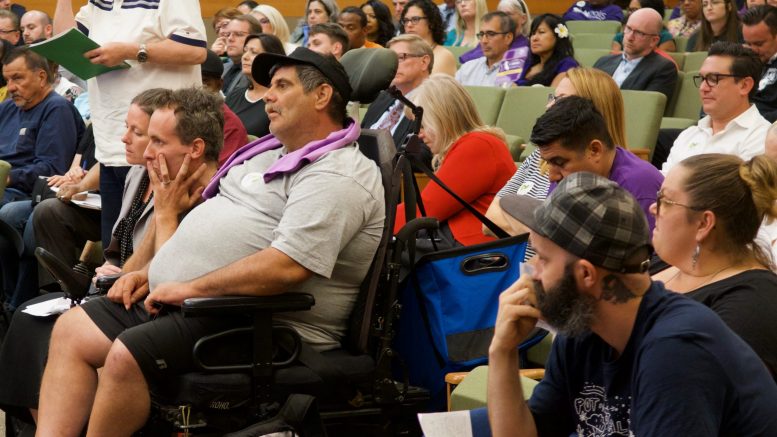 Editor’s note: An initiative to cap rent hikes in Sacramento will be on the November ballot after all. And that could be bad news for “strong mayor.”

If Sacramento progressives didn’t have enough reason to vote in November, they now have another big one: On Aug. 12, a state Court of Appeals judge ordered that a rent control initiative appear on the ballot.

And in a special meeting Aug. 14, the City Council approved the resolution to make that happen—though not before changing the ballot question in a way that might make it less attractive to voters.

Still, voters can determine the immediate future of Sacramento by supporting what they call “real” rent control—and by opposing the latest “strong mayor” proposal.

As incoming City Councilwoman Katie Valenzuela tweeted shortly after the ruling became public: “If you have trouble reaching me, it’s because I’m officially clearing my schedule for nothing but #NoStrongMayor and #YesRealRentControl.”

Now, it will be even more challenging for Mayor Darrell Steinberg to get the “strong mayor” city charter change passed. While he has support from business and labor leaders, neighborhood groups and activists are adamantly opposed. And they have an important, if somewhat unexpected ally, in the city firefighters union.

As recently as July 31, it appeared that the rent control measure wouldn’t be on the ballot. Sacramento Superior Court Judge Steven Gevercer sided with the city and ruled that it did not have to place the measure on the Nov. 3 ballot, even though tenants’ rights groups collected more than 44,000 signatures for it in 2018.

The initiative would permanently cap annual rent increases at the inflation rate, with a minimum of 2% and a maximum of 5%. It would also strengthen a ban on no-cause evictions for all renters and create an elected board to set the limits.

The City Council, however, passed its own, less strict version in August 2019. The Tenant Protection and Relief Act limits annual rent hikes to 6% plus inflation—and a maximum of 10%—for apartments built before 1995. The annual cap was set at 6% effective July 1.

The act also protects renters with more than 12 months of continuous tenancy from no-cause evictions. The act, which took effect last Sept. 12, ends in 2024.

Some of those behind the ballot measure agreed to the compromise, which Steinberg helped to broker. But other advocates refused to withdraw the measure.

So the city sued in June to confirm it could keep the initiative off the ballot. Among other arguments, the city said the new elected rent control board would take power away from the council and the city manager, as set by the city’s charter.

“The court will not compel the city to place the initiative upon the ballot since it proposes a revision of the city charter which may not be accomplished by direct initiative,” Gevercer ruled.

But on Wednesday, Justice Ronald Robie of the Third District Court of Appeal ruled that there is a compelling case the initiative is legal and that those “substantial legal questions” can be decided after the election. Robie said the city had not proven that the initiative should be kept off the ballot.

“The people have prevailed. Get ready to vote for #realrentcontrol this November,” the Sacramento Tenants Union tweeted.

The decision “is a major victory for renters and democracy,” overcoming a council controlled by landlords and real estate interests, Jovana Fajardo, director of Sacramento ACCE, said in a statement. “We are ready to hit the ground running to get this initiative passed this November and win real rent control for Sacramentans,” he added.

“The City respects the careful consideration the Third District Court of Appeal is giving to this novel legal issue and appreciates the attention it is paying to its timeliness,” City Attorney Susana Alcala Wood said in a statement. “As directed, the City will proceed to place the initiative on the November ballot and appear before the Court at the hearing scheduled next month to present its arguments as to why this initiative is unconstitutional, and therefore, invalid.”

“We are required to follow the law,” Steinberg said at the start of the Aug. 14 City Council meeting. There was no public comment or council discussion.

While the council passed the resolution to put Measure C on the ballot, at the last minute it changed the order and language of the ballot question to give less attention to the actual limits on rents and on evictions and more emphasis to the disputed rental housing board and its powers.

The old question was: “Shall the measure adding an article to the Sacramento City Charter to set a base rent for all covered rental units within the city; cap annual rent increases on those units; limit landlords’ ability to terminate tenancies; and create a new elected body (Rental Housing Board) with powers that include setting rents, establishing regulations, establishing its own budget, charging fees to finance its operations, establishing fines, and adjudicating rent adjustments, be adopted?”

The new question (which wasn’t posted publicly until two hours and 20 minutes before the meeting): “Shall the measure adding an article to the City of Sacramento Charter to (i) create a new elected body (Rental Housing Board) with powers that include setting rents, establishing regulations, establishing its own budget, charging fees to finance its operations, establishing penalties, conducting investigations, and adjudicating rent adjustments; (ii) set a base rent for all covered rental units within the city and cap annual rent increases; and (iii) limit landlords’ ability to terminate tenancies, be adopted?”

The “impartial” analysis from the city attorney’s office follows suit, listing the rental housing board first among the main components of the proposed measure.

The new rent control board is also prominently mentioned in the official ballot argument against the measure, which says it would add “another layer of bureaucracy” and would ” require significant new costs and remove the City Council’s ability to deal with rent control issues and disputes.”

The argument also says that Measure C would slow down the building of more affordable housing in Sacramento. It was signed by Steinberg and council members Eric Guerra, Rick Jennings, Jay Schenirer and Allen Warren.

The rebuttal argument from the measure’s supporters, however, says that cities with rent stabilization have the highest rates of construction in California and that the measure will keep existing rental housing affordable.

In addition, the official argument in favor of the measure calls the new rent board a “democratically elected, independent board that will balance the interests of landlords and renters alike.”

The argument also says that Measure C would “keep families in their homes and provide essential relief for workers at a time when they need it most” and that it is being opposed by “the same wealthy real estate interests who are raising rents and evicting good renters because they want to squeeze even more money out of every unit.” It is signed by Valenzuela, county Democratic Party Chairman Terry Schanz, members of SEIU Local 1021 and the Alliance of Californians for Community Empowerment and Michelle Pariset, the advocate who sued the city to get the measure on the ballot.

But in their rebuttal argument, opponents say that the measure adds nothing for renters that the council hasn’t already approved. “While the citizen’s initiative is often a valuable tool for the people to directly decide an important issue, the initiative process also can sometimes be misused. Measure C is a clear example of misuse,” the argument says.

Unless Robie’s decision is itself overturned, voters will get to vote on the measure. But if it passes, it could be wiped out later.

If the measure does go into effect, the city will need to hold a special election so voters can choose members of the new Sacramento Rental Housing Board and decide its staffing and funding. A staff report notes that the city of Mountain View in the Bay area recently started charging an $85 fee for its rent control program. If Sacramento assessed the same fee on 26,000 units, that would raise about $2.2 million a year.

Besides the legal changes, the political climate for the measure has changed dramatically. Thousands of people are struggling to pay their rent after being laid off or having their hours slashed during the COVID-19 lockdown. They’ve lost the $600 a week federal unemployment bonus, and bans on evictions could end soon.

The local eviction moratorium for residential units in Sacramento is set to end Sept. 30. Renters would still have until Jan. 28, 2021 to pay back rent and avoid eviction.

Tenants financially impacted by the pandemic will get a little more time with protection from eviction, through Jan. 31, under a bill passed by the Legislature at the last minute Monday–on its last day and a day before the statewide moratorium expired–and signed by the governor. Renters must come up with 25% of the rent they owe from Sept. 1 through Jan. 31, and must pay back all missed rent by March 1.

Erica Jaramillo, a member of the Sacramento Tenants Union, said in a statement that many have “been physically uprooted from their rental apartments and homes and unexpectedly unable to afford their rent through no fault of their own” but due to the pandemic. “For renters facing this scary reality they will now have an opportunity to get permanent tenant protections that the City Council worked hard to keep the people from voting on,” she added.