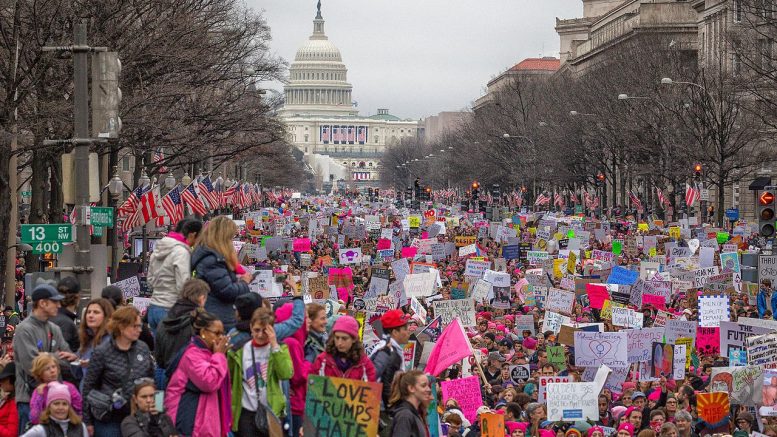 The Women’s March in Washington, D.C., the day after President Trump’s inauguration in January 2017. It might require similar demonstrations to stop Trump from stealing a second term. (Photo from Wiki Commons)

Editor’s note: President Trump says out loud that he plans to stay in power—no matter what voters say

I usually focus on local issues and politics. But I just can’t let it pass when the president attacks democracy so directly and threatens the voting rights of all Americans.

In recent days, Donald Trump has repeatedly refused to promise a peaceful transfer of power if he loses.

Instead, he keeps talking about the “scam” and “hoax” of the expected record number of mail ballots due to the COVID-19 pandemic, and telling his followers that the only way he can lose is if the election is rigged.

In cahoots with Attorney General William Barr, Trump has already tried to concoct a voter fraud case (nine ballots!) in Pennsylvania. His campaign operatives and supporters are already hard at work to challenge mail-in ballots, intimidate voters at the polls and seek to overturn results.

And Trump is making clear that he expects the U.S. Supreme Court to hand him victory. That’s why he’s pushing so hard for his nominee to replace the late Ruth Bader Ginsburg—which he announced Sept. 26 is Amy Coney Barrett—to get on the court before the election. Barrett was confirmed by the Republican Senate on Oct. 26 and joined the court a day later.

Trump is saying out loud for all to hear that he plans to overrule the will of voters—and steal the election, if necessary—so he can stay in power.

Lots of people are alarmed, and rightly so.

On Thursday, Sen. Bernie Sanders gave his first public speech since losing the Democratic presidential primary, and hopefully his supporters who may not be that enthusiastic about Joe Biden are listening.

I fear Biden and his campaign aren’t taking this seriously enough. On MSNBC he called it a “typical Trump distraction.” “I think the American people are on to this guy,” Biden said, adding: “We’ll have an election in this country, as we always have had, and he’ll leave.”

Biden must hammer Trump on this threat to democracy in their first debate Tuesday night, as well as Trump’s dereliction of duty and failures on the COVID-19 pandemic, police violence and so much more.

In the chaotic debate, Biden tried to reassure Americans again, saying: “If we get the votes, it’ll be all over.”

Trump, on the other hand, did nothing to reassure voters, but instead was more threatening. Asked whether he would ask his supporters to stay calm during an extended vote count, he instead urged them to go watch the polls. And given the chance to condemn white supremacy, he instead told the far-right hate group Proud Boys to “stand back and stand by.”

The president again said it will be a fraudulent and rigged election and warned: “This is not going to end well.”

Some local leaders and corporate officials are worried about potential violence around the election.

In yet another hard-to-fathom moment in the Trump era, the U.S. Senate actually had to pass a resolution to reaffirm “its commitment to the orderly and peaceful transfer of power called for in the Constitutions of the United States.”

The nonbinding resolution, passed unanimously on Thursday, also says the Senate intends that that “there should be no disruptions by the President or any person in power to overturn the will of the people of the United States.”

Some Republicans have also pushed back. “Fundamental to democracy is the peaceful transition of power; without that, there is Belarus. Any suggestion that a president might not respect this Constitutional guarantee is both unthinkable and unacceptable,” tweeted Sen. Mitt Romney of Utah, who despite being the only Senate Republican to vote to remove Trump in the impeachment trial earlier this year is now supporting the president on the rush to fill the Supreme Court vacancy.

As usual, Trump’s allies are enabling his outrages.

For instance, Senate Judiciary Chairman Lindsey Graham is fully on board, promising to support the nominee even before Trump named her and saying on Fox News, “People wonder about the peaceful transfer of power. I can assure you it will be peaceful. Now we may have litigation about who won the election, but the court will decide, and if the Republicans lose, we’ll accept that result. But we need a full court.”

Think about that: A leading Republican is already assuming that this presidential election will be decided by eight or nine unelected justices, not the voters.

When Trump is accused of wanting to become a dictator, his defenders say it’s a ridiculous exaggeration. But he sure keeps acting like it. At a campaign rally Friday in Atlanta, Trump joked about the criticism as the MAGA crowd chanted, “12 more years.”

This is happening right before our eyes. So what to do?

Since California is such a Democratic stronghold, if you live here, voting against Trump isn’t enough. Talk to friends and family in other states, especially if they live in battlegrounds such as Florida, Michigan, Pennsylvania or Wisconsin. Take part in phone banks and text efforts in swing states. Donate to grassroots groups trying to get out the vote.

The best—maybe the only—way to stop Trump is such an overwhelming defeat in the Electoral College that he can’t dispute the election, or at least that Republicans won’t support him.

Preserving American democracy is up to the voters—which is the way it should be. But will we step up?