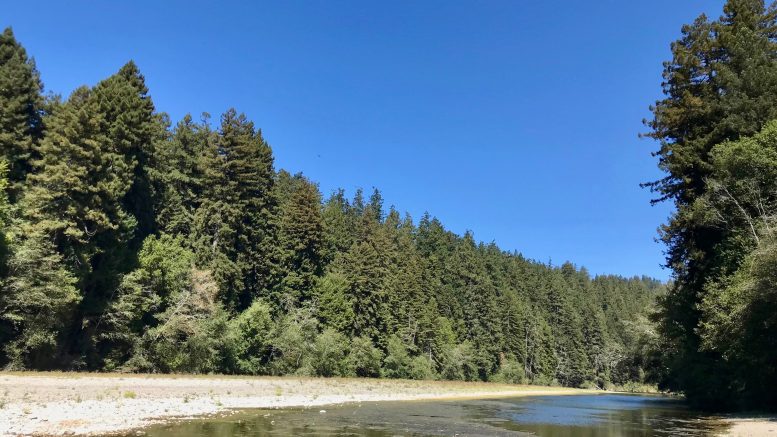 Conservationists are determined to save a unique redwood forest in Sonoma County, which runs along the Gualala River. (Photo by Scott Thomas Anderson)

For many, the lush, towering redwoods along Sonoma County’s Gualala River are vestiges of a once-unspoiled Golden State, the verdant vanguard of a century-old forest that cradles an undammed stream spilling from the coastal mountains into the rolling, white waves of the Pacific. The forest’s surviving tree cover and translucent waters below are teeming with life.

A logging corporation plans to start cutting through 342 acres of redwood forest near the edge of the river. Experts say that won’t just eliminate a section of brawny, aging redwoods; it will threaten the birds, fish and frogs that live in the Gualala River, which flows directly into a protected marine sanctuary.

Last week, a grassroots organization of Sonoma County residents teamed up with the Center for Biological Diversity to haul that timber company into federal court. They sued to stop the logging project on the grounds that it violates the federal Endangered Species Act.

In a time when catastrophic wildfires have state and federal officials agreeing on the need for better forest management, conservationists argue that the mature redwoods along the Gualala River are the exact kinds of trees that should not be cut because they offer all the benefits of oxygen production and wildlife habitat with a relatively low fire risk.

The lawsuit was filed by Friends of Gualala River, a group that for years has worked to protect wild aspects of the forest within the river’s lower watershed, improve public access to its tributaries and restore its threatened, natural habitat. For its members, there is no more pressing threat than the massive logging proposal from the Gualala Redwood Timber Company.

The plan would remove mature redwoods from private property encompassing the alluvial flats just south of the mainstream of the Gualala River. The tree-cutting would also happen close to the Sonoma County Gualala Point Regional Park Campground, an area that locals call “the Magic Forest.”

“We first heard about it about five years ago,” Charles Ivor, the group’s president, said of the logging plan. “Then the permit was issued early this year.”

The group asserts that though on private land, the logging project would savage the river’s redwood ecosystem, specifically harming the California steelhead fish, the Coho salmon, the California red-legged frog and the northern spotted owl.

The Center for Biological Diversity agrees and has brought its expertise and resources to the group’s federal lawsuit.

Gualala Redwood Timber Company has described its logging project as “a very light harvest” and received approval from the California Department of Forestry and Fire Protection in March 2018. The company could not be reached for further comment.

Peter Galvin, co-founder of the Center for Biological Diversity, says the logging and associated road construction will create warmer water temperatures in the river and cause sediment smothering in its channels and gravel stream bottoms.

“The removal of the forest canopy increases the temperatures in the streams, and when you do that across a large enough area over the stream system, it becomes more and more significant for salmon that need that cooler water,” Galvin told SN&R. “Another big risk involves just the falling of the trees and dragging them, which creates a large amount sediment and disturbance in the streams and floodplain itself, which is directly connected to the river where the fish live.  … And there’s a lot of evidence that logging in the floodplains leads to a dramatic decline in the food sources available for steelhead.”

The lawsuit filed Sept. 15 cites various ways that the logging would harm or destroy habitat for the northern spotted owl and red-legged tree frog as well and alleges that the project contradicts federal recovery plans for the red-legged frog and Coho salmon. The recovery plan for the Coho salmon identifies logging as a cause for the decline in the species population.

In a meeting earlier this month, President Donald Trump and Gov. Gavin Newsom showed some hesitant agreement on the notion that poor forest management over decades is now playing a role in the record California wildfires. The role of what some characterize as overzealous restrictions on logging is part of that debate.

Galvin said those concerns are relevant to the fight over the Gualala redwoods because these particular 100-year-old trees are uniquely resistant to fueling a massive fire.

“In this case we’re dealing with a forest in the stream bottom, in the river channel itself, in a moist environment, which is very difficult to burn,” Galvin said. “With climate change increasing the severity of forest fires in California, it’s even more important to look at the areas that are most resistant to fire. Over time, they become even more crucial as a refuge for wildlife. It really does add an extra emphasis on the need to protect these forested river corridors.”

As the Center for Biological Diversity uses the federal Endangered Species Act as the basis for the lawsuit, it’s also fighting a separate legal battle to protect that very law. The center filed an action last year against the U.S. Department of the Interior, after it sought to rewrite the act in a way that allows regulators to consider the profit goals of corporate stakeholders alongside the best scientific data when ruling on wildlife protections. Previously, science alone was the determining factor. The center recently won on a motion from the government to dismiss the case outright.

As for the legal battle with the Gualala Redwood Timber Company, the plaintiffs expect there will be no compromise and that the case will go to a full trial, likely in the spring.

For Ivor, who lives near the river, the stakes in the trial are high. “In a time when species of all kinds are being decimated around the world, we need to protect what we have,” he said. “We have to take a stand for what’s left.”