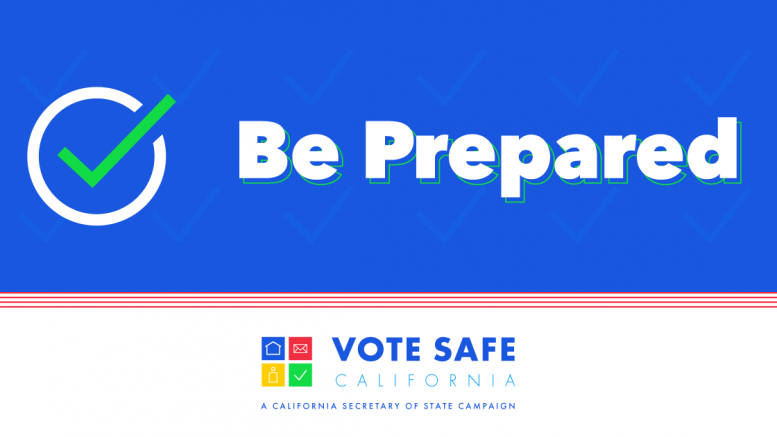 It’s now less than 100 days to the Nov. 3 election, and for it to go off smoothly, mail balloting must absolutely succeed.

Millions more voters across America will be casting mail ballots in 2020 than in 2016 so they can avoid crowded polling places during the COVID-19 pandemic. Under a new state law, every registered voter in California will receive a mail ballot, with postage prepaid.

So on Monday, the state’s chief elections officer launched a Vote Safe California campaign to urge residents to make sure they’re registered by the Oct. 19 deadline, and then to vote by mail or vote in person before Election Day.

“My message to voters is simple—don’t wait, prepare now,” Secretary of State Alex Padilla said in a statement. Confirming voter registration information and signing up for ballot tracking now, he said, “will make the election smoother both for voters and elections officials.”

President Trump isn’t helping matters by tweeting constantly—and falsely—about mail balloting and voter fraud. “The 2020 Election will be totally rigged if Mail-In Voting is allowed to take place, & everyone knows it. So much time is taken talking about foreign influence, but the same people won’t even discuss Mail-In election corruption,” he tweeted Sunday.

While there’s no proof for Trump’s conspiracy theories, that doesn’t mean mail balloting is fool-proof.

In California’s March primary, about three-fourths of voters received mail ballots. But more than 102,000 mail-in ballots were disqualified, about 1.5% of the total, according to the Associated Press. Of the disqualified ballots, about 70,000 missed the deadline to be postmarked on or before Election Day and to arrive within three days after. Another 27,500, didn’t have a signature, or the signature didn’t match the one on record.

Those key problems were reinforced by preliminary results released Monday of a California Voter Foundation study . It looked at mail ballots cast in Sacramento, San Mateo and Santa Clara counties and found that the most common reasons they were thrown out were lateness, voters forgetting to sign their ballot envelopes or signatures not matching voter registration signatures.

In Sacramento County, most late ballots rejected in three elections were postmarked after Election Day, not disqualified because they arrived too late to be counted.

The analysis also uncovered that while young voters are the smallest age group of mail voters, they are the largest group whose ballots were rejected. Overall, an average of 1.7% of mail-in ballots have been rejected in California since 2010, according to the foundation.

In releasing the study’s preliminary results, foundation founder and President Kim Alexander said in a statement that “the only thing worse than people not voting is people attempting to vote and having their ballots go uncounted. California has enacted numerous reforms and safeguards to address ballot rejection, but the problem persists.”

Similar shortcomings have been reported in other states that have ramped mail voting this year. Also, there are concerns that the U.S. Postal Service won’t be up to the task in November—that it won’t process ballots quickly enough to prevent voters from being disenfranchised.

Senate Democrats are asking the Postmaster General to give regular briefings on how it plans to address the challenges of mail ballots, writing: “Millions of Americans continue to rely on the hard work of the Postal Service to ensure their vote will be counted, especially during the COVID-19 pandemic.”

At the same time, there’s a growing political fight over mail balloting, with Trump opponents seeking to expand it and his allies going to court to restrict it. Wealthy donors have already put in more than $100 million into the battle, the AP reported Monday.

Be the first to comment on "The 100-day countdown"