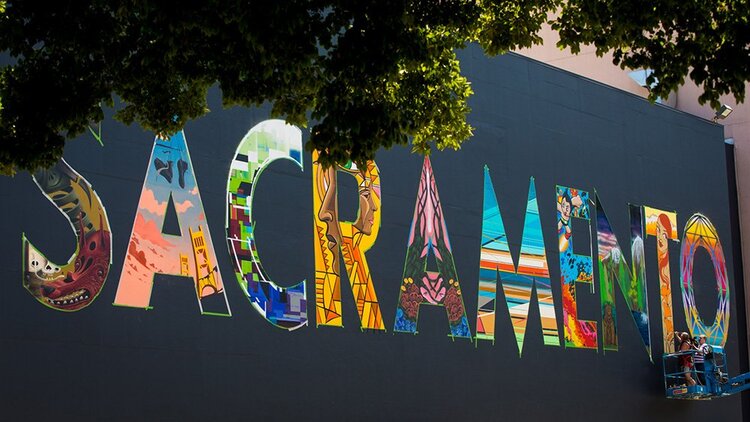 A mural at Sacramento State University. (Photo from city of Sacramento)

Essay: For real public safety, we need to invest in preventing violence

Our city’s current approach to public safety lacks imagination. It assumes that violence and crime are inevitable and that our only option is to respond.

The call to “Defund the Police” challenges us to question our deeply held assumptions. Instead of only asking, “What can we do to prevent police violence?” we need to step back and ask, “Why do we only invest in responding to crime instead of preventing it?”

Safety is best achieved through prevention; if given the option, any victim of crime or violence would rather not have that experience. Studies show that this can be achieved by addressing the sources of stress that cause crime and violence by investing in creating jobs, housing and youth services, and by breaking cycles of addiction and abuse with social support and healthy development. This is reflected in the promises for the Measure U sales tax passed by Sacramento voters in 2018.

The mayor asked these important structural questions while reflecting on why he reneged on the promise of Measure U and other recent decisions. I hoped his reflection would inspire us to reconsider our approach to public safety. I think most Sacramentans—even those who worry that “defunding” might mean no one will answer if they call 911—realize that doing everything possible to minimize the need for emergency response is a good place to start the conversation.

But instead of tackling the broader systemic question, the city’s leaders sheepishly went about community engagement for a modest set of emergency response and police oversight reforms. Last-minute meetings were scheduled, often without the essential voices in the room, yet the consensus opinion of those consulted was that any serious proposal should come with a significant funding commitment. Unfortunately, this advice was ignored.

Instead, the City Council on July 1 rushed to action without the benefit of public input, due diligence and research. Police Chief Daniel Hahn presented an update on the city’s compliance with “8 Can’t Wait,” a debunked series of police reforms.

Council members failed to mention the lacking evidence during their discussion, but it was mentioned repeatedly during public comment by callers who were only given two minutes to respond to seven items on the agenda bundled as one. Somehow the callers cited more credible research and offered more tangible solutions than the four hours of council dialogue that preceded them.

“I think most Sacramentans—even those who worry that ‘defunding’ might mean no one will answer if they call 911—realize that doing everything possible to minimize the need for emergency response is a good place to start the conversation.”

But the story that went untold at the July 1 council meeting is this: With $375,000 a year from the city, only seven staff and a months-long vacancy in the director position, Advance Peace—along with other community programs such as Brother to Brother, Voices of the Youth, the Black Child Legacy Campaign and Healing the Hood—gave Sacramento nearly two years with no juvenile homicides.

The Sacramento Police Department has a budget 150 times that of Advance Peace and has never achieved anything near this feat of prevention. The city’s lowest homicide rates in the past decade coincide with the operation of two non-police gun violence prevention programs, Ceasefire and Advance Peace. In the multi-year gap between the programs, gun violence increased 37%.

Staff from these organizations predicted the recent uptick in shootings because COVID-19 exacerbated the known stressors that cause community violence. Unfortunately, their preemptive requests for additional support went unanswered while the police budget increased by $10 million in 2020-21. These programs are among the many examples of evidence-informed investments in safety that would benefit from significantly increased funding.

So as we begin to question our deeply held assumptions, we must ask: Is our commitment to giving the police 45% of the city budget costing us real public safety?

California’s revised use-of-force bill may not put more officers on trial, but supporters say it will ‘save lives’

2 Comments on "The wrong questions"