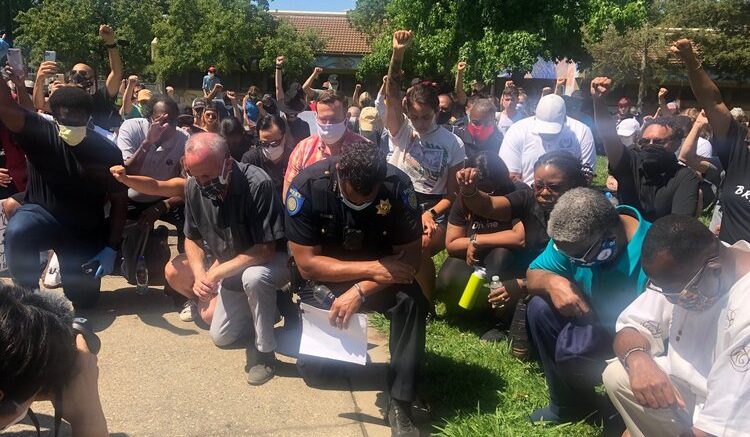 Attorney General Xavier Becerra called Wednesday for the Sacramento Police Department to require its officers to deescalate confrontations with residents and to complete a comprehensive study on apparent racial disparities in use-of-force incidents.

In the second set of recommendations to Sacramento police following the killing of Stephon Clark in March 2018, Becerra’s office also urged the department to expand partnerships with mental health and social welfare workers because in about 60% of use-of-force incidents between 2013 and 2018, the subject is perceived to be in some kind of altered mental state.

Becerra’s review also found that African Americans were involved in 43% of use-of-force incidents between 2013 and 2018, more than three times their share of Sacramento’s population. It also concluded that in multiple cases, force was used against individuals who failed to comply with an officer’s orders, but posed no danger.

The recommendations add to the proposals before Mayor Darrell Steinberg and the rest of the City Council, who are being pushed on police reform and defunding the department by activists and Black community leaders.

Steinberg said the report will be discussed in public in August or September.

“There are still significant racial disparities in the use of force and who gets pulled over,” the mayor said in a statement he tweeted. “Our policies requiring de-escalation before force is even considered must be articulated more clearly. And our diversity hiring goals and processes must be continually strengthened.”

Some of the recommendations track with ones made by the Sacramento Community Police Review Commission and already being considered by the council. They include one for the department to revise its use-of-force policy to more closely follow Assembly Bill 392, which limits the use of deadly force to when it is necessary to protect the life of an officer or a bystander, not just reasonable.

The report released Wednesday also delved into how officers are recruited and hired, and then how they are treated when on the force.

Becerra’s office said all recruitment materials should seek applicants who want to protect the public and who value life, instead of brochures with military-style images that attract candidates “with a ‘warrior’ mentality who may be more likely to use unnecessary or disproportionate force.”

The report also said that the department should reassess hiring standards to make sure they reflect what’s needed on the job now, not older physical requirements that make it more difficult for women to qualify.

And the report recommended drafting specific personnel misconduct categories so that bad behavior can’t be hidden and allowing supervisors to send officers into early intervention programs based on a pattern of conduct, not just a significant incident.

Becerra commended the city of Sacramento and the police department “in this deep-dive” and said the recommendations “mark an important step in our broader work to advance systemic reform.”

“To our partners across the state: I urge you to read our recommendations and build on them,” Becerra said in a statement. “It’s time for us all to answer the call for change.”

Steinberg said he appreciated that Becerra recognized the department’s progress and openness to suggestions. “I’m glad our department and our city are willing to push to set the best standards for the state and the country,” the mayor said.

“We hope that leaders at all levels of law enforcement will stand with us to implement these critical changes.”

In January 2019, Becerra’s office issued a report that focused more tightly on the Sacramento department’s use-of-force policies, many of which it has since followed. They included banning chokeholds and shooting at or from moving vehicles; requiring annual use-of-force training for all staff, regardless of rank; conducting formal reviews with officers, supervisors and command staff after officer-involved shootings; and being more transparent with the public.

In March 2019, he announced that his office would not file criminal charges against the two officers involved in Clark’s killing, following a similar announcement by Sacramento County District Attorney Anne Marie Schubert days earlier.

On June 15, Becerra unveiled statewide proposals that he said follow on from his recommendations in the Clark case.

Becerra called for requiring police officers to intervene to prevent excessive force by fellow officers, to deescalate situations and to give verbal warnings before using force. He also called for a ban on choke holds and on firing into moving vehicles, except when there’s an imminent deadly threat. And he called for a reexamination of the police role dealing with the mentally ill and homeless.

He said his use-of-force proposals align with the national “Eight Can’t Wait” reforms, and he urged police departments to make the changes as soon as possible, before many will be required by law starting in January.