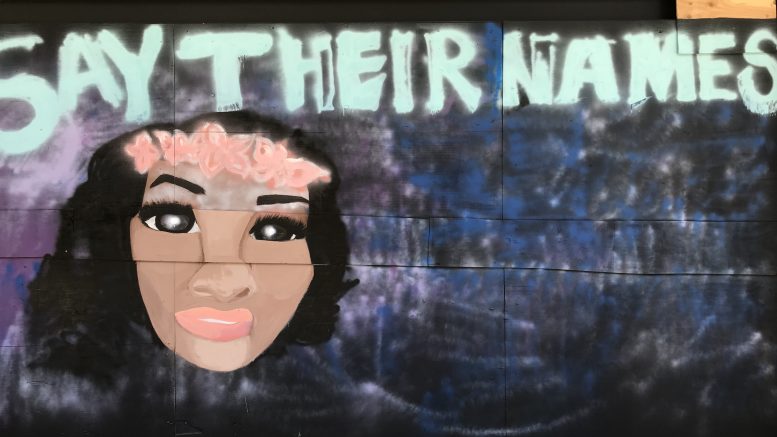 Some Sacramento businesses that boarded up after damage now have a message. (Photo by Foon Rhee)

Essay: Racial healing will take real work, and the first step is saying that racism is real.

“Racism is not the shark, it’s the water we swim in every day.”

Sit with that statement.

Breonna Taylor, Ahmad Aubery, George Floyd and the latest (on camera) Rayshard Brooks are merely the ones we see. They are not the first, nor will they be last.

Consider this: My mom had to go to the back door to be served at restaurants, she is 74.

I was bused from my neighborhood school on the Black south side of Stockton to the white north side. I still remember the comments from the adults at the “white school,” angry that we little Black first, second and third grade students would somehow hurt their white kids. This was 1977 in “liberal California.”

I remember in Sacramento when they bused kids from Black Del Paso Heights to white Rio Linda, and when there were Klan rallies and cross burnings in Elk Grove. This was the 1980s and ’90s, and we still see signs of this today.

I remember driving from my house in Natomas to my mother’s home in North Highlands and a man in the next car saying, “Nigger die” as he held up what looked like a gun. This was a few weeks ago, 2020.

We are replaying 16th century problems in a 21st century context. We are all complicit. Instead of plantations and lynchings, we have a prison industrial complex and police shootings. We have hospitals that still believe Black women can tolerate more pain, and schools where we limit Black History to February, with the standard poster of Martin Luther King, Jr. and Rosa Parks.

To paraphrase the Declaration of Independence, we hold these truths to be self-evident, racism is woven in the fabric of the United States by the blood and tissue of the Black, Brown and Native bodies who were exploited to build it. I know some of you are tempted to say: “But there were Polish, Jewish, Italian and other white people who built this nation, too.” Stop! You are invalidating an experience.

“Stop invalidating, dismissing, ignoring, explaining the experiences of those who live racism first hand. My dear white liberal friends, accept that the world is not about you.”

Now what? How do we move forward with racial healing in America?

Admit there is a problem. The first step in treating any disease is first admitting there is a problem that needs to be treated. We all have a different lens by which we view it; however, say it with me, “Racism is real.”

Seek understanding. Stop invalidating, dismissing, ignoring, explaining the experiences of those who live racism first hand. My dear white liberal friends, accept that the world is not about you. Come from a place of inquiry, and understand that sometimes the response to your inquiry will be anger.

Acknowledge the hurt. Stop trying to manage our feelings. I don’t need to smile and be happy just because you are uncomfortable. Every person in the United States who is identified as something other than White can tell you about the first time they experienced racism personally.

Lean in and fight with love. There is a difference between being a “non-racist” and an “anti-racist.” By being a non-racist you are continuing to benefit from the unmerited favor by being white. An anti-racist understands that they have to put some “skin in the game.” In every interaction ask yourself: How has race, racism and bias influenced my actions? How am I upholding and perpetuating a system of inequality and inequity? Have I called out racism when I’ve seen it?

Examine root causes. People identified as Black are not a monolith; however, there are shared experiences of disenfranchisement. If we, as a larger Sacramento community, do not treat the root causes, we will continue to get the same results.

Provide financial remuneration. The wealth of this nation was built on the bodies of enslaved people. Wall Street, itself, was a slave market before it was rebranded as the center of finance. As a nation we must acknowledge and figure out how to make things “right.”

“Racism is not the shark, it’s the water we swim in every day.” How are you going to heal the waters?

2 Comments on "Where do we go from here?"