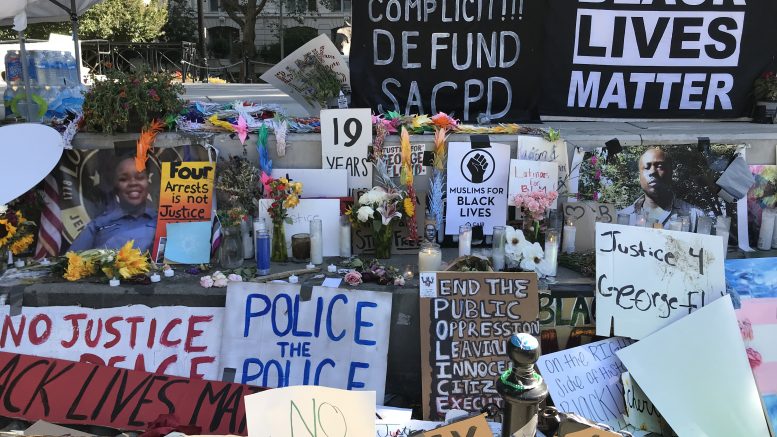 Cesar Chavez Plaza, across from City Hall, became a center of protests after the police killing of George Floyd. (Photo by Foon Rhee)

Editor’s note: Sacramento council members are told the police can’t be fixed, so must be defunded

If Sacramento City Council members listen only to the loudest voices, their path forward is clear:

Don’t bother with police reforms such as changing use-of-force policies or requiring more training. Defund the police department and redo the city budget. Do what the protesters in the streets demanded.

If it were only that simple.

While Mayor Darrell Steinberg and council members should represent their constituents, their duty is to do what they believe is best for the city—even if it’s not popular.

Then, if the majority of voters don’t like their decisions, they can kick them out of office, as some activists are already threatening to do. That’s our democracy.

And it was on display Wednesday night, when after four hours of presentations and debate and 90 minutes of public comments, the council backed the mayor’s plan for an independent inspector general who will investigate police shootings of civilians and other use-of-force incidents and present findings to the public before any discipline of officers is determined. “This is fundamental to our credibility,” Steinberg said.

The council also supported his proposal to create a new civilian unit to respond to non-criminal 911 calls, including those involving homeless and mentally ill individuals. “This is not reform, this is restructuring,” said Councilwoman Angelique Ashby, while Steinberg called it a “holistic community response” and a “revolutionary” change.

And the council agreed to vote as soon as August on recommendations of the Sacramento Community Police Review Commission that include making clear that deadly force should only be used as a last resort, not just when there’s an imminent threat to officers or the public, and that call for drug testing of officers after use-of-force incidents.

Together, the new proposals build on the reforms passed after the March 2018 killing of Stephon Clark by Sacramento police, and those changes already made since the protests over George Floyd’s killing by Minneapolis police on Memorial Day.

The new moves are “the beginning of systemic reform,” Steinberg said.

But the actions won’t be enough to satisfy many residents and some prominent community leaders, or overcome community distrust and anger—at least based on the 40-odd phone calls Wednesday night and nearly 150 comments submitted before the meeting.

“We do not want police in our communities,” another speaker said.

Some accused the mayor and council of being in the pocket of police unions and of breaking a promise to voters to use the Measure U half-cent sales tax increase approved in November 2018 for economic development in Black neighborhoods.

The police department budget increases by about $10 million to $157 million in the 2020-21 fiscal year that started Wednesday. The portion funded by the Measure U sales tax jumps from $35.2 million to $41.7 million. That’s about half the total Measure U spending because revenues have plummeted during the COVID-19 shutdown.

Several callers repeated the same wording to demand an immediate 50% cut in the police budget and a phase-out of the rest over four years so the money can be spent instead on housing, health care, violence prevention and other community programs.

Some accused the mayor of starting the meeting with a report on gang violence—which the police department blames for a recent spike in shootings that has resulted in 25 homicides so far this year, compared to 18 at the same point last year—to justify the department’s budget.

“The purpose of setting the meeting up this way is to try to make a PR case for how violent Sacramento is and how much we need police. DO NOT FALL FOR IT,” tweeted Flojaune Cofer, chairperson of the Measure U Community Advisory Committee and an outspoken critic of the council who is calling for all the Measure U money for police to be redirected to economic development, housing and homelessness.

And many speakers criticized the mayor and council, saying they were ignoring the will of the people, especially people of color. “Listen to us,” one demanded. “Listen to the people.”

After the public comments, Steinberg replied, “We do hear you.”

But that doesn’t mean he and the council will do what the speakers want. For instance, on defunding the police, he said, “I don’t believe in that.”

Council members, who don’t meet again until July 21, aren’t hearing from many voices dissenting even a little from the activists dominating the debate.

When I posted a column earlier this week asking whether deep cuts to the police budget might lead to more unsolved crimes and less justice for those victims, Councilwoman-elect Katie Valenzuela did not like it.

“With all due respect, this article is horribly misleading,” she tweeted at me. “First, no one thinks there should not be enough resources to address violent crime. To say we’re going to cut budgets to the detriment of already poor outcomes is misrepresenting the movement’s goals.”

So at the risk of getting on the wrong side of activists again and being accused of not being alt-weekly enough (whatever that means), I’ll just ask: Is there a consensus on what “Defund the Police” actually means?

Would the department be disbanded entirely, as in Minneapolis? Would any officers patrol neighborhoods? Would there still be a unit of armed officers to respond to emergencies?

Is the goal a much smaller police department that gets less money? If so, doesn’t the civilian 911 team go a long way toward achieving it? It was the only proposal on the council’s agenda to get any significant support from speakers.

The unit will be staffed by mental health professionals and social workers and will be started with $5 million. A draft plan is due by the end of the year so the council can adjust the city budget at the middle of the fiscal year, as usual. City officials will study how many 911 calls can be transferred to the new unit—and thus how much of the police budget can be shifted.

In 2019, officers responded to about 400,000 calls for service, and about 54,000 were “low risk,” such as medical assistance, welfare checks, missing persons and abandoned vehicles, according to preliminary numbers from the department. Department leaders pledged to do a deep look at the data and at what’s worked in other cities. Fire department and emergency medical service calls will also be considered.

If the result of all this debate is a slimmed-down police force that has better relations with the community, a stricter policy on when officers can use force and an inspector general who can enforce the rules and investigate shootings, isn’t that pretty significant progress that could set the stage for even more?

Or is it wrong to even ask that question?

2 Comments on "The loudest voice"