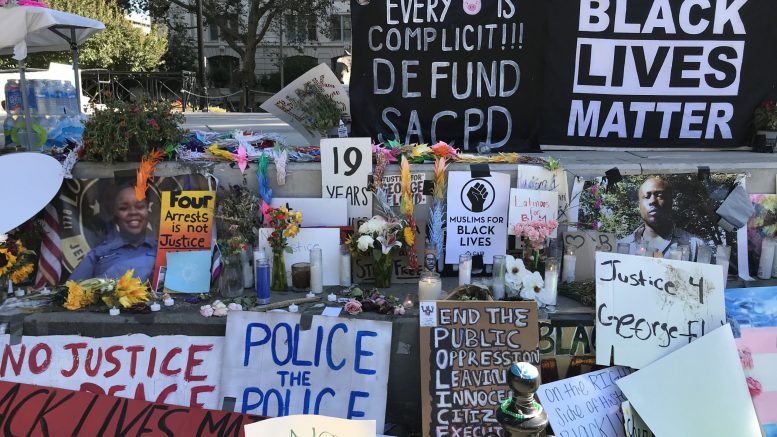 One sign calls for defunding the Sacramento police at Cesar Chavez Park, which is a center for police reform rallies. (Photo by Foon Rhee)

A citizens committee created to help follow through on economic justice in Sacramento has been sidelined during the COVID-19 pandemic.

Now its chairperson is rebelling, arguing that inclusive economic development is getting shortchanged as a greater share of Measure U money is going to the police department, even as the “Defund the Police” movement gains momentum.

So Flojaune Cofer declared June 11 that she plans to hold a virtual meeting of the Measure U Community Advisory Committee on Monday evening—with or without official permission from City Hall.

“To be clear: I will take any lawsuits that come my way for violating Brown Act—though this meeting should have been publicly noticed and my Facebook page is public,” she said in an email to committee members with the Zoom invite. “I understand if any of you feel uncomfortable joining. You may have relationships you need to preserve for work. I will take no offense if you are unwilling or unable to join. Our city leadership has put you in a very difficult position.”

After a day of scrambling, Mayor Darrell Steinberg’s office said that the advisory committee will hold an official meeting on June 15—and that Steinberg will attend, via Zoom. The agenda was posted to the city’s website late Thursday, including an item for “open dialogue” with the mayor.

UPDATE: On June 15, Steinberg had some spirited exchanges with Cofer, who, along with three other committee members, sent a letter to the mayor and City Council calling for a complete overhaul of Measure U spending to respond to the pandemic and also to the calls for police reform. They proposed not funding the Police Department at all through the Measure U sales tax, and reallocating that $41.7 million for economic development, housing and homelessness.

She also told him that his proposals are “uninspired” and should not even be considered, and that if he really cared as much as he says he does, he would redo the budget.

“This is a travesty,” she said.

Steinberg responded by saying he had put forward a sweeping police reform proposal earlier in the day that calls for creating a new city unit to handle some 911 calls instead of police. That could reduce the police budget, eventually.

The mayor also pointed out he was re-elected in March with nearly 80% of the vote.

“I’m as much of an idealist as you are,” he added. “I have a different job than you do. I take your challenge to do better.”

Cofer, senior policy director at Public Health Advocates, has expressed frustration with the city before, complaining at the committee’s last meeting on Feb. 24 that it wasn’t getting enough information or freedom to do its job.

She said she understood why the committee didn’t meet in March or April, but the cancellation of the May 18 meeting made her curious.

“This feels like something fishy is going on,” Cofer told SN&R. She “started digging around” into the city’s budget documents “and that’s when I looked up the Measure U budget.”

What she found—and noted in another email to the committee—is that Measure U sales tax revenues have plummeted during the coronavirus shutdown of businesses. It had been projected for the 2020-21 fiscal year starting July 1 at $99.6 million, but is now estimated at $80.2 million.

Cofer argues that breaks a pledge to the public of how much Measure U money goes to neglected and underserved neighborhoods through inclusive economic development programs.

But the city disputes that.

The original half-cent Measure U, approved in 2012 and renewed in November 2018, was designed to restore police, fire and other basic services that were slashed during the Great Recession.

It was the second half-cent, approved by voters in that same November 2018 measure, that was championed by Steinberg for inclusive economic development after the police killing of Stephon Clark resurfaced longstanding complaints from black and brown neighborhoods that they had been left behind.

UPDATE: Steinberg told the citizens committee that the city has spent or committed $70 million to help disadvantaged neighborhoods and promote inclusive economic development. He also said that because of the loss of tax revenue during the COVID-19 lockdown, the city has to use some Measure U money to avoid layoffs and cuts in services.

But, he said, he’s committed to using the second half-cent for economic development, youth, workforce training and homelessness and housing, once the economy rebounds.

Still, Cofer said the additional money for the Police Department during the George Floyd protests doesn’t sit right right with her. “They’ve already had to pay off $3 million for their bad behavior,” she said about the settlements the city has paid to Clark’s children and protestors arrested last year in East Sacramento. “And now they’re getting an extra $5 million.”

Steinberg’s office says that some inclusive economic development projects could also come out of the $89 million in federal coronavirus relief money the city received, as long as they have some link to the impact of COVID-19. While some of it is set aside for neighborhood programs, much is going to direct relief for battered small businesses. The City Council is still determining how to spend nearly $56 million.

On June 15, Steinberg invited the committee to help decide how to spend the federal stimulus money.

Cofer has already signed on to an alternative set of spending recommendations from incoming City Councilwoman Katie Valenzuela that include direct rent and mortgage assistance and vouchers for low-income or unemployed residents to spend at local businesses.