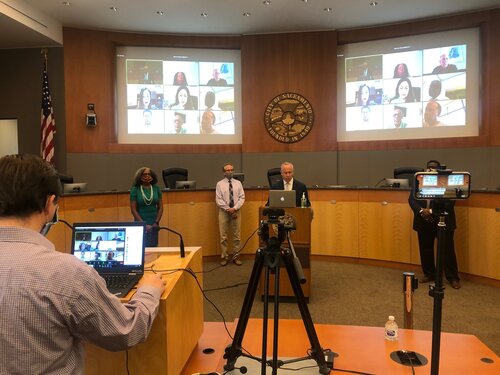 Will term limits and a sunset date be enough to get a “strong mayor” plan before Sacramento voters in November?

Mayor Darrell Steinberg promised City Council members he would respond to their concerns and comments about his “strong mayor” plan as he tries to cobble together a majority to vote for putting the city charter change on the Nov. 3 ballot. Friday, he offered a revised proposal that the council will vote on Tuesday, three days before the Aug. 7 deadline for placing the measure before voters.

Version 2.0 of the Sacramento Mayoral Accountability and Community Equity Act of 2020 includes a two-term limit for the mayor—which means that Steinberg, who was easily reelected in March, would hold the additional power for only one four-year term if the measure passes. It also includes a 10-year sunset clause, which means voters would get the chance to reauthorize—or end—the changes in 2030, according to Mary Lynne Vellinga, his communications director.

But it does not split the mayoral accountability and community equity provisions into two measures for voters to decide separately, as demanded by some community activists who are sure to mount a spirited “no” campaign if Steinberg’s revised plan makes it on the ballot.

There is one other significant change. Under the initial plan, the mayor would appoint the city manager, with confirmation by the council, and could also remove the manager. Under the revised plan, if the manager is not fired for cause, the council could block the dismissal on a two-thirds vote.

Other major provisions remain the same: The mayor would propose a budget and could veto line items in the budget, as well as ordinances, subject to an override by a two-thirds vote of the council. With the mayor no longer on the council, a ninth council district would be added in the 2022 election after the 2020 Census and redistricting.

There are some smaller tweaks: The mayor would no longer have the power to appoint and remove members of boards and commissions. And the mayor would be specifically required not to facilitate violations of open meeting and sunshine laws and not to coerce the city manager.

The plan would also require the city to evaluate the impact of budget actions and ordinances on promoting racial, ethnic and gender equity (the new version adds LGBTQ equity) also and on helping small businesses. Under the revision, the council would propose initiatives to address inequities, and the city auditor would track progress, including an annual report in the budget. The city would also create a Fair Housing and Human Rights Commission.

And the plan would require that the city invest $40 million in left-behind neighborhoods, as pledged in the Measure U half-cent sales tax increase in November 2018. Under the revision, at least 25% of that money, or $10 million, would be for children and youth impacted by poverty and violence.

Youth Forward, however, urged that the council make clear that the $10 million is new spending; otherwise, it said, “the measure continues the city’s existing pattern of underinvesting in prevention and youth and overinvesting in police and fire.”

Youth Forward led the coalition that put the unsuccessful Measure G on the March ballot. It would have changed the city charter to guarantee 2.5% of unrestricted general fund revenues for programs for children or youth—estimated at that same $10 million. Steinberg opposed Measure G and instead proposed a more limited version—which would have set aside about $3 million—for the November ballot. But Youth Forward and other proponents balked, and that measure was put off until at least 2022.

Steinberg had backing from business and labor leaders for his original plan, but it was strenuously opposed by many neighborhood activists. They say the community equity provisions they want—and have been highlighted by the police reform and broader racial justice movements—are being used as leverage to get “strong mayor” passed.

But at the July 28 council meeting, Steinberg rebuffed the idea for two separate measures, saying that they fit together. He does, however, want the equity pledges to be quickly passed by council ordinance, though they would become more permanent if added to the city charter.

The revised plan hasn’t swayed opponents. Flojaune Cofer, chairperson of the city’s Measure U Community Advisory Committee, questions the timing of the plan, with progressives about to come on to the council. They include Councilwoman-elect Katie Valenzuela, who is leading the opposition and who tweeted: “We’ve had thousands of residents take to the streets to demand justice for Black lives. But rather than answer the calls for assistance and justice, or adopt the recommendations presented by advocates, we’re given… ‘Strong Mayor.'”

Leaders of neighborhood groups, who have staved off previous attempts at “strong mayor,” posted an online open letter to Steinberg on Monday and urged council members to vote “no.” “We appreciate your recent attention to long-standing issues in our community, but strong mayor is not what we want,” they wrote. “Please focus on the issues you can help us with today and stop pushing a ‘solution’ that will not help us.”

And as of Tuesday morning, nearly all 59 e-comments submitted before the meeting were opposed.

Besides his own vote, Steinberg needs four more on the council to get the measure on the Nov. 3 ballot. And based on the July 28 debate, the revised plan looks like it may secure him that majority.

The 2014 “strong mayor” measure rejected by 56% of Sacramento voters included a three-term limit for the mayor that didn’t apply to prior terms served. It also kept the council at eight members and required six votes to override a veto by the mayor. Ashby, Jennings, Schenirer and Warren supported the 2014 measure, while Hansen opposed it.

Terry Schanz, chairman of the Democratic Party of Sacramento County, who opposes the plan, quickly expressed his disagreement with the new version.

“Artificial term limits harm, don’t help the public. We have term limits, they are called elections,” he tweeted, adding, ” Stop this tired distraction & focus on real problems in our city. Start by allowing a public vote on rent control.”

A judge ruled Friday that the city does not have to allow a rent control measure on the November ballot.

While critics say the new charter changes are being rushed—they weren’t publicly released until July 23—Steinberg and his supporters say that they have been discussed in Sacramento for years, since they are similar to the 2014 measure.

Steinberg and his backers also argue that the timing is right: The post-George Floyd police reform debate and the COVID-19 recession have demonstrated that the mayor needs more authority to do what residents expect.

Some opponents, however, say it’s dangerous for public health, bad for public participation and divisive for the city to have a campaign for such fundamental changes during the COVID-19 crisis. San Jose Mayor Sam Liccardo cited those reasons in delaying his “strong mayor” plan until 2022.

The League of Women Voters of Sacramento County, which has opposed strong mayor since 2009, also cites the pandemic in its objection this time.

“This is a major change to the structure of our City government that weakens the voice of neighborhoods and the people of Sacramento. That is why it has been rejected by voters so many times,” the league says.  “With less than 70 days before ballots go out and in the midst of a pandemic, there has been no time for public vetting of this significant proposal to amend Sacramento’s city charter and change its governance structure dramatically.”

Be the first to comment on "‘Strong mayor’ version 2.0"