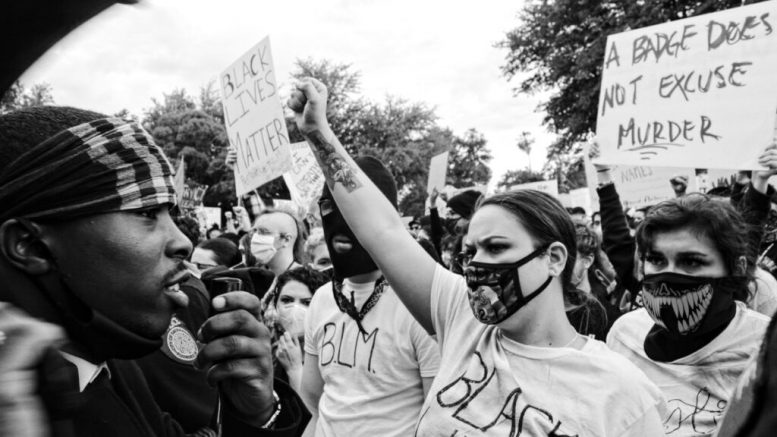 Stevante Clark, left, leads a protest after the death of George Floyd.

Editor’s note: In Sacramento’s police reform debate, look at the bigger picture. The city’s rate of police killings is lower than the national average.

Sacramento has its own ugly history on police violence.

But as city leaders get into the details of potential reforms, it’s important to also have some perspective.

One piece of context: Between January 2013 and December 2019, the Sacramento Police Department recorded an average of 4.0 killings a year per 1 million people—a total of 13 killings, including 5 Black people.

That rate is below the national average of 4.6 for big city police departments, according to the Mapping Police Violence database. Sacramento’s rate is also lower than departments in other California cities, including Bakersfield, Fresno, Los Angeles, Long Beach and Stockton. And it’s way better than Phoenix, Reno and other cities.

Mapping Police Violence—an advocacy group that compiles one of the most authoritative sources of information on this issue—says that one-fourth of all police killings were in the 100 biggest cities and that 38% of those killed by those departments were Black, far higher than the 21% in the overall population. Also, 47% of unarmed people killed were Black, four times the rate of whites. The St. Louis and Oklahoma City police departments killed so many Black men that their numbers exceeded the U.S. homicide rate

Nationwide, there were between 1,050 and 1,143 killings by police each year from 2013 to 2019, and in 99% of the cases, the officers were not charged, according to Mapping Police Violence. In the global picture, the U.S. is a complete outlier compared to other developed countries, with far more police killings of civilians, just as it has far more gun deaths.

Pointing out these numbers isn’t to minimize police violence in Sacramento or anywhere else. Every unjustified police shooting should be prosecuted. Elected leaders should strive to make every police department as fair and non-racist as possible.

After all, the police killing rate in Minneapolis was a relatively low 3.0—and that’s where George Floyd died under an officer’s knee on Memorial Day, sparking protests in Sacramento and across America that continue to this day.

And while Sacramento’s numbers may be better than average, they include several recent high-profile cases, most notably the July 2016 death of Joseph Mann and the March 2018 killing of Stephon Clark.

Those cases are in the city’s collective memory as the reform debate ramps up. While Congress and the state government are considering changes in policing, significant reforms for Sacramento—if they happen—will be decided at City Hall.

But his plan doesn’t go far enough for some who want Sacramento join the “Defund the Police” movement by redirecting millions to community programs. Black Justice Sacramento plans to announce its defunding plan on Friday at an event to be attended by City Councilwoman-elect Katie Valenzuela, Les Simmons, a prominent South Sacramento pastor running for council, and Flojaune Cofer, chairperson of the Measure U Community Advisory Committee, who has been outspoken on police funding.

“We will directly address Mayor Steinberg’s ‘plan’ for racial justice, and reveal our own,” the coalition says. “We will no longer plead with those in power. Rather, we will assert the truth– that we are the people and we are the power.”

At the same time, it’s worth noting that some activists’ demands—such as training officers in deescalation techniques and recruiting a more diverse department—could cost more money.

The City Council is scheduled to debate Steinberg’s proposals on July 1, along with others from council members and advocacy groups.

Whatever reforms are eventually approved will build on those that have already happened in recent years, including public release of video from body-worn cameras and revisions to the police department’s use-of-force policy. The Community Police Review Commission will have a bigger say, and there’s a new director of the Office of Public Safety Accountability, who has her own views on reform.

In what is sure to be a long and emotional discussion, it should be noted that despite Sacramento’s problems with policing, it could be worse. In many American cities, it actually is.