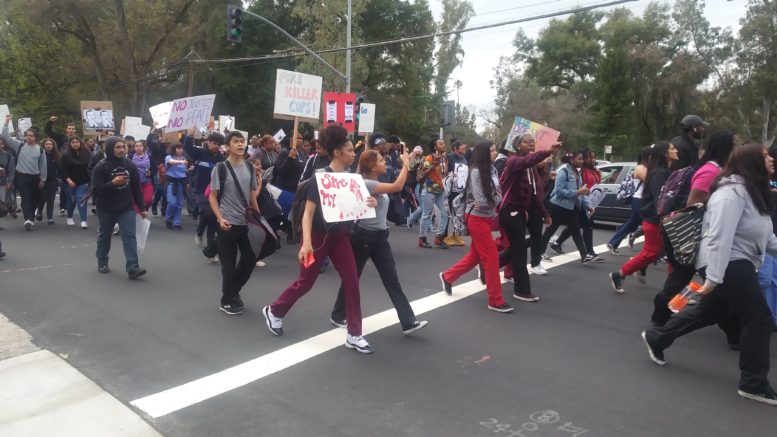 Residents march in Sacramento in March 2019 to protest the clearing of two Sacramento police officers in the killing of Stephon Clark. (Photo by Raheem F. Hosseini)

The person may not be a household name, but the director of public safety accountability is an extremely sensitive job in Sacramento, where the police department is still rebuilding trust after the Stephon Clark killing.

On Tuesday, the City Council voted unanimously to appoint LaTesha Watson to the $175,000-a-year post, which oversees police and fire personnel and investigates complaints by residents

Watson says she would bring a wealth of experience, a “passion for policing” and a commitment to moral standards. “You have to have the strength and courage to do what’s right,” she told me by phone on Monday.

Her previous job did not end well. Watson was fired last year as police chief in Henderson, Nev.; in response, she filed a discrimination complaint.

“Even the right decisions have consequences. I am a living example of that.”

Watson, 42, started her career in law enforcement in 1994 as a 911 dispatcher in a suburb of Dallas, Tex. In 15 years with the Arlington, Tex., police department, she rose through the ranks to become deputy police chief in 2014. In November 2017, she was brought in as a reformer to Henderson, a Las Vegas suburb, and became the first female, African-American police chief in Nevada history.

But in less than two years, she was out.

Officials reportedly dismissed her for creating divisions between management and labor, not showing respect to union members and not cooperating with an independent investigator. “Your lack of accountability and unwillingness to work with union members, which make up most of your employees, demonstrated that you were not able to effectively lead this organization,” Henderson’s deputy city manager wrote Thomas in a letter obtained by the Las Vegas Review-Journal.

She told the Las Vegas Sun, however, that she met push-back from the supervisors union and wasn’t supported by city officials, especially after the city manager who hired her stepped down due to health reasons. She also told the newspaper that at least eight Henderson officers were arrested on suspicion of DUI or domestic violence on her watch, but said her disciplinary actions were appealed and her office faced pressure from city and union officials.

Watson, however, was also the subject of internal investigations for at least 10 complaints including for accepting tickets from an ambulance company to the Stanley Cup finals and assigning religious readings, the Sun reported. She was dismissed after initially being put on paid administrative leave and given the choice of being terminated for cause or leaving voluntarily and agreeing not to make any claims or any disparaging comments against the city.

Watson later filed a complaint with the Nevada Equal Rights Commission and the federal Equal Employment Opportunity Commission saying that she was discriminated and retaliated against. In the complaint, she says officers used the “N” word and posted disparaging remarks on a website.

Those investigations are ongoing, and Watson said she will let their findings dictate what happens next.

Now a consultant based back in Texas, Watson says her experience in Nevada will help her in the new job in Sacramento.

“I learned a lot of things. I’ve reflected on it quite a bit,” she said. “Even the right decisions have consequences. I am a living example of that.”

Vice Mayor Jeff Harris, the point person on her hiring, said Monday that what happened in Nevada “absolutely” gave council members pause, but that Watson addressed the concerns so there is no hesitation offering her the post.

A nationwide search drew about 40 candidates, who were narrowed to three finalists interviewed by council members.

Watson stood out with her deep awareness of community-oriented policing, personal experience with racism and a realistic idea of the hard work and time to improve ties between police and community, Harris said.

“That’s what sold me on Latesha,” he said.

“She’s kind of feisty,” Harris added, which is good because the person in this job needs to stand their ground.

Watson succeeds Francine Tournor, who retired last September after 11 years as director of the Office of Public Safety Accountability, which also advises the departments and the City Council on reforms, including those after two officers shot and killed an unarmed Clark in his grandmother’s backyard in Meadowview in March 2018.

The officers were not prosecuted, but the city settled a wrongful death claim filed by Clark’s two sons for $2.4 million.

Watson said that while she did not follow the Clark case closely, she has been deeply involved in police departments developing best practices on officer-involved shootings and community relations.

Too often, police officers have a “negative connotation,” which she says is very different from when she started. She said she wants to restore the standing of police, but that requires reform, which some officers resist.

“We don’t like the way things are, and we don’t like change,” she said. “It’s an oxymoron.”

Watson told the council on Tuesday that it is “an honor” to come to Sacramento and she’s excited to get to know all the key stakeholders.

She plans to start June 8. In the first 120 days on the job, she said she will put a priority on meeting department officials, the City Council, union leaders and community members, though the pandemic will make the logistics more difficult.