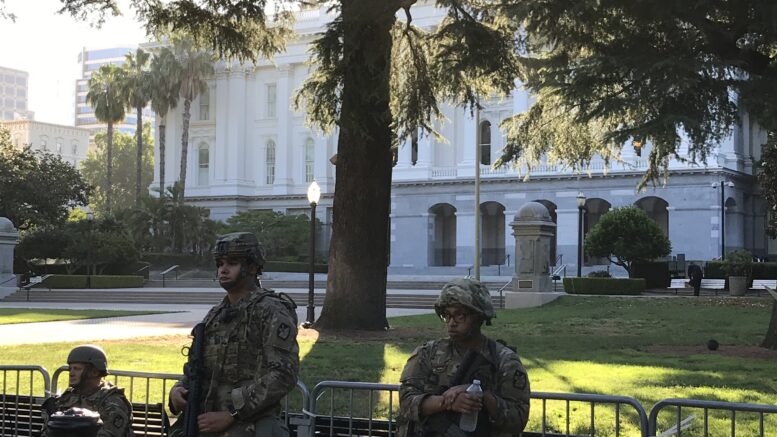 Members of the California National Guard patrol outside the state Capitol on Thursday. (Photo by Foon Rhee)

Essay: Instead of a curfew and the National Guard, Sacramento should be defunding police and limiting use-of-force

When I watched the video of George Floyd dying at the hands of police—crying out that he couldn’t breathe, calling out for his mother—my heart broke, again. He shouldn’t be dead. Neither should Breonna Taylor, Tony McDade or the thousands of others who have been killed by those whose job is supposed to be public safety.

I was so proud to see hundreds of my neighbors take to the streets to protest. This was the Sacramento I knew, the city I got to know so intimately through months of canvassing and community events during my campaign. My neighbors were refusing to accept injustice. They were demanding action.

Those powerful voices were met, however, with the very force they were protesting against. I watched live streams in horror as law enforcement shot protestors with rubber bullets and tear gas canisters, sometimes without warning and sometimes even as those individuals were attempting to comply with orders. They shot at children, reporters and legal advisers, with some videos showing troubling evidence that they were aiming for people’s faces.

If the tragic deaths of Stephon Clark and Joseph Mann at the hands of Sacramento police didn’t send enough of a message, let me be clear: Issues of law enforcement accountability and use of force are not limited to Minneapolis. The police response to the protests reaffirmed that we still have a lot of work to do here in Sacramento.

“I’m humbled by the bravery of those who have continued to peacefully protest after these brutal events, and shocked by our city’s response.”

I’m humbled by the bravery of those who have continued to peacefully protest after these brutal events, and shocked by our city’s response. Rather than condemn the actions of police against peaceful protestors, city officials have focused on the vandalism and burglary conducted by a few people—often blocks, if not miles, away from protestors—to justify a curfew and the presence of the National Guard.

That is not what we need. I am calling on the mayor and City Council to immediately commit to the following actions:

1. Redirect funding from police to community services. Investment in services to address community needs will reduce calls for police, and are far more evidence-based and cost effective than using police to address social issues for which they aren’t trained.

2. Update use-of-force standards. Sacramento has never adopted the Community Police Review Commission’s recommendations after Assembly Bill 392 passed into law. We have the opportunity to do that, and to eliminate the use of barbaric tactics such as neck restraints or use of tear gas—a chemical banned for use in warfare.

3. Create a fully independent Community Police Review Commission. The commission needs to be established in the city charter and have the ability to issue subpoenas.

It’s not enough to say we understand, or to stand with protestors. Those of us who are in positions to make change have a responsibility to act—because Black Lives Matter.

8 Comments on "The right response to George Floyd"