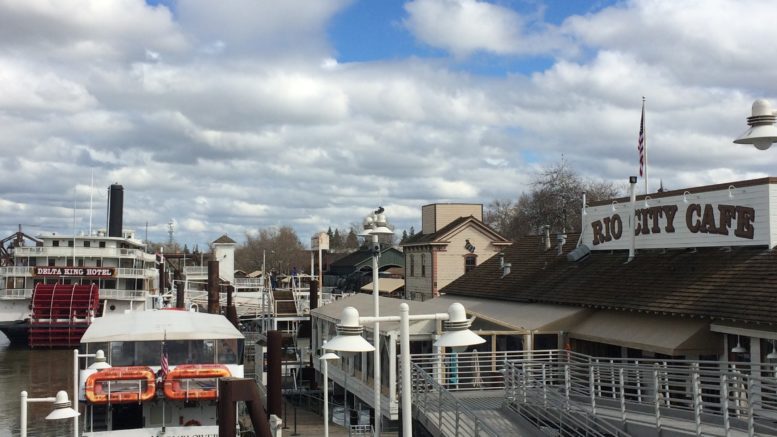 The Old Sacramento waterfront is historic, but it's hardly exciting. (Photo by Foon Rhee)

Many of my favorite cities share at least one thing—an exciting waterfront: Barcelona, Paris, Vancouver, Venice and, of course, San Francisco.

We’ll never be Paris, but surely we can do better than our Old Sacramento riverfront, historic but also boring.

So I was very curious what designers—both professionals and amateurs—came up with for the city’s “Waterfront Idea Makers” competition. Entries were due by March 11 and the public voting continued through March 20.

The winner of the open contest, who gets $1,000, was Craig Segall, a member of the Environmental Council of Sacramento, who focused on removing or decking Interstate 5. He wrote an essay about his winning idea for SN&R.

Five design teams picked by the city and being paid $10,000 each vied for for the $5,000 People’s Choice award. The winner was New York-based Perkins Eastman.

The prize money is good for the winners. But the much bigger payoff could be for the city, which is hoping to transform the 28-acre historic waterfront, between the Tower and I Street bridges.

This is a priority for Mayor Darrell Steinberg. Michael Jasso, the assistant city manager in charge of the project, says he’s excited about seeing ideas “out of the Sacramento box.”

“We want to expand our vision of what’s possible,” Jasso told me.

While I’m no expert on urban design, some of the 41 entries appear quite intriguing.

Perkins Eastman, which won the People’s Choice award, has an engaging before-and-after video for its plan that includes a terrace, theater, market square, promenade and, to top it off, an “iconic spire” leading to a new K Street pier. The Hettema Group out of Pasadena has a golden spike sculpture and a video of its own outlining its proposal for an arts and culture zone, an entertainment pier, an interactive water fountain, riverfront terraces and a nighttime light show and fireworks at Tower Bridge.

Another appealing design isn’t from a city-hired team. Page & Turnbull, an architectural firm with offices in Sacramento, and Gretchen Steinberg of SacMod have a very kid-friendly suggestion that features a floating park-playground, water sports and river raft rides.

Other brainstorms include an old-time music preservation hall, a Western outpost of the Smithsonian Institution, an aquarium, a Ferris wheel, even a gondola.

The goal—and it’s not easy—is to design a destination that appeals to both locals and visitors, and that is also unique to Sacramento and its history, not just another cookie-cutter waterfront attraction.

The ideas may be brilliant, but, of course, it’ll take some big bucks to turn them into reality. City staffers are looking at all the entries and plan to make a recommendation about feasibility in April.

Some cash could come from hotel tax revenues, once the Sacramento Convention Center expansion is complete. Some could come from Measure U, though there are many competing priorities, including the mayor’s proposed $200 million economic equity fund for neighborhoods. And it’s possible that the waterfront could attract “opportunity zone” investment from wealthy people seeking tax breaks.

Money problems have, at least for now, derailed a long-planned streetcar line that was supposed be stopping in Old Sacramento by now. In January, the lowest construction bid came in $76 million more than projected, forcing officials to reevaluate.

The bottom line: Reimagination doesn’t come cheap. The city probably can’t afford the more ambitious visions, at least not all at once. But doesn’t Sacramento deserve something nice along its river?

Be the first to comment on "Editor’s note: Reimagining Sacramento’s waterfront"