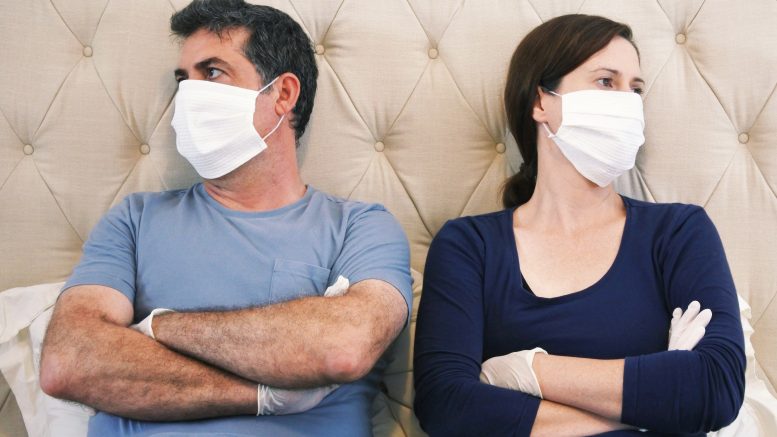 Hey look, it's one of those stock images of an unhappy couple.

If COVID-19, soaring unemployment, historic civil unrest, suffocating wildfire smoke and a chaotic start to the school year are laying siege to Sacramento families, it hasn’t yet translated into more divorces.

So far, the opposite is true.

An SN&R analysis of Sacramento Superior Court records shows that marriage dissolution requests during the past six months of the pandemic are actually down nearly 30% from the same period last year, and that family law filings overall are down nearly 27%.

Between March and the end of August, Sacramento’s family law court received 5,657 total filings, notably fewer than the 7,748 filings received over the same time frame in 2019.

Those figures are all down from the same period last year.

Another court marker of domestic strife—civil harassment filings—dropped 31% during the pandemic.

And while it’s true that the coronavirus crisis essentially shuttered Sacramento Superior Court for two months, there wasn’t a surge in family law filings once the court reopened.

These figures contrast with sensational headlines about soaring divorce rates amid the lockdown. Fox News and The Daily Mail conflated rising interest in divorces from surveyed couples and attorneys’ predictions of impending breakups with an actual increase in divorce proceedings. Both click-bait news outlets cited speculative data from a company that was trying to curry free advertising for its legal document templates.

That’s not to say the pandemic and its ripple effects might not accelerate the collapse of more marriages. It just hasn’t happened yet.

“I suspect there are a lot more people in the lower income bracket who just can’t afford it,” said Amber White, an associate attorney and mediator at Burke Law Firm, Inc., “just based on the level of contentiousness we’re seeing in the cases we are seeing.”

Are couples fracturing under the pressures of the pandemic?

While Sacramento’s family law filings are down, White said she and her colleagues have been much busier. Her law firm works with clients primarily in Sacramento and El Dorado counties, but also handles cases in Placer, Amador and Yuba counties.

“We are not typically as busy as we are right now. We are swamped,” White told SN&R. “Everyone’s a little exhausted.”

White said the firm’s ongoing cases have picked back up and that there’s been “a huge uptick” in financial support and child custody modifications due to rising unemployment and the start of the distance-learning school year.

Some of this has been complicated by the end of federal stimulus aid and changes to unemployment benefits. “Every time unemployment changes, a new support calculation has to be done,” White explained.

This is normally the time of year the divorce business slides into hibernation for the holidays before picking back up after the New Year. But White doesn’t expect that to happen unless there’s another lockdown or the economy plummets further.

“We are not typically this solidly busy in September with no sign of slowdown,” she said.

The coronavirus crisis forced Sacramento Superior Court to suspend operations toward the end of March—resulting in zero divorce filings in April. Months later, business still isn’t back to normal.

Filing counters and clerks’ offices remain closed, meaning all family law filings have to be submitted through the mail or court drop box. That may have slowed the pace of filings for people representing themselves, even as the court has started back up with in-person family law trials and shifted other matters online.

Mediation appointments, settlement conferences and hearings for restraining orders are being held virtually, while the Family Law Self Help Center has reopened to review files and conduct workshops remotely.

Before the pandemic hit, the court offered a One Day Divorce Program for lower-income people representing themselves. That’s been suspended through the end of the year.

The Burke Law Firm offers something called collaborative divorce, which takes separated couples out of the courtroom and puts them in a room with their own attorneys, coaches, mediators and a financial adviser. The goal is a mutually favorable agreement without litigation or lingering acrimony. The collaborative model costs more up front, but White said it saves money and heartache in the long run.

She said it hasn’t been harder to convince couples to go the collaborative route during the pandemic, despite the mounting pressures of the year.

“All of the cases are emotionally fraught,” White said. “People are having a harder time taking a deep breath.”