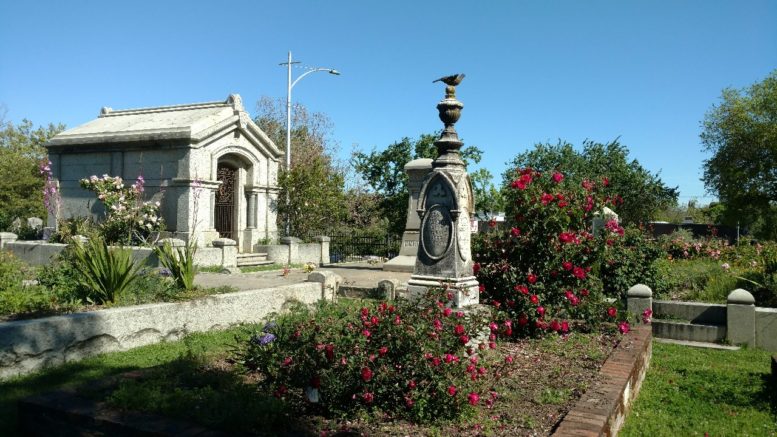 With about 500 bushes, there are still a lot of flowers in Sacramento's historic City Cemetery rose garden, but no rose-covered arches. (Photo by Debbie Arrington)

Sacramento’s historic City Cemetery and its world-famous rose garden continue to be a prickly subject.

This weekend would have been the cemetery’s annual Open Gardens celebration, attracting hundreds of visitors from throughout Northern California. Of course during the coronavirus pandemic, that event has been indefinitely postponed. Organizers hope to reschedule it this fall.

But the cemetery’s hundreds of roses don’t know their garden party was canceled. They bloomed anyway.

At least most of the bushes bloomed. Missing this spring are the climbing roses that graced dozens of metal arches. Each April, they gave the cemetery’s Victorian-era rose garden a distinctly romantic look and heavenly scent.

Sometime in February, all the climbers were chopped down. Several other big bushes were severely whacked, too.

This was way beyond winter pruning, which was done by rose garden volunteers in December and January. The arbor display destruction was heartbreaking for the volunteers who had been tending those plants for years.

“Nearly all of the roses next to the arbors were cut severely back, in two cases to the ground,” said Anita Clevenger, curator of the cemetery’s Heritage Rose Garden.

Clevenger, who had been a volunteer since 2003, is no longer officially “curator” because she refused to sign the city’s new volunteer guidelines and was told she was no longer welcome.

But she still visits the cemetery. As a city park, the cemetery remains open free to visitors daily. What she sees saddens her.

The arbors were at the crux of a long-running dispute between city officials and rose lovers. Arches between plots were deemed “not historically accurate and would be removed,” according to the technical advisory committee formed to create guidelines for the cemetery’s gardens.

Rose garden volunteers were told they could keep trellises inside plots to help train the bushes. But those trellises disappeared, too.

“The city removed every piece of rebar and the metal frames that we used to support the roses without any discussion with or explanation to the nonprofit group under which the rose garden operates or to any of the volunteers,” Clevenger said. “We had worked for years to find ways to train and support the roses to their best display, and keep the roses out of the paths and from touching the monuments. Nobody is asking any of the rose people anything or telling them anything.”

In a statement Thursday, the city said that the roses will not be allowed to grow back over the remaining arches and the arches will be removed because they “were determined to be unsafe and do not align with the City’s historic preservation guidelines.”

“The City is open to working with cemetery volunteers to find appropriate places to have arches in the cemetery, for example along the perimeter,” the statement added.

Also, the city said that volunteers are no longer under what amounted to a gag order, forbidden to communicate with the media (or friends and the public via Facebook) about anything happening in the cemetery without city permission.

The bush reduction—or rejuvenation, depending on one’s viewpoint—was supervised by Tom Liggett, a rose expert from San Jose who has become a hands-on adviser to the city on the cemetery gardens.

He was instrumental in the creation of San Jose’s historic rose garden. Liggett, who wrote a book on rose pruning, believes extremely hard pruning can force an old rose bush to push out strong new canes.

“Some of Tom’s pruning worked very well, and the roses have responded with bloom, although on smaller plants,” Clevenger said. “The climbing and many of the species and other once-bloomers [roses that bloom only once a year] are producing much less bloom on plants that are a shadow of their former magnificence.”

The city said the pruning was done to “preserve the rose plants’ longevity and health.”

For rose lovers, there are still plenty of roses to see and smell. And many of the severely pruned bushes do seem to be recovering, although it will be several springs before they reach their previous size—if ever.

As for the rose-covered arches, they will be only a memory.

Protecting the mail and the election

Be the first to comment on "A thorny situation"