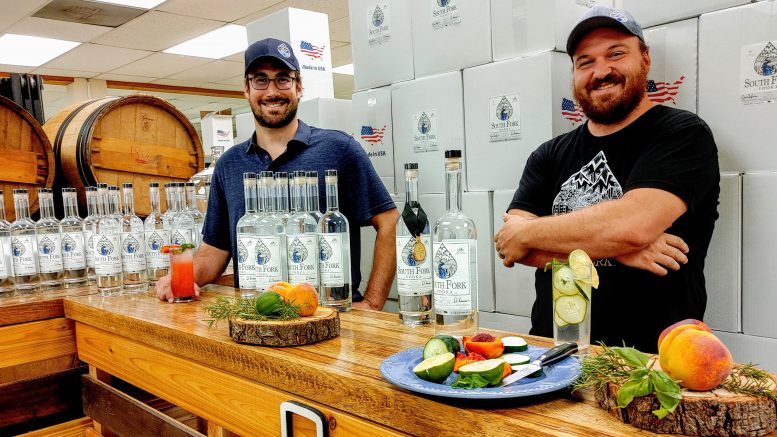 In March, South Fork Vodka won praise for making and donating vats of hand sanitizer to medical workers, first responders and senior care facilities across the region as fear of COVID-19 led to those products suddenly vanishing from store shelves. As one of several distilleries that helped counter-balance hoarding and panic-buying, it earned plenty of fans along the way.

Now, South Fork has won two international awards, drawing the conversation back to the attention the distillery got before COVID-19—the growing buzz for its unique way of making vodka.

Based in Nevada County, South Fork Vodka is the brainchild of Jon Dorfman and Dan Kennerson, who both grew up in the area, though they didn’t meet until working together doing ethanol research for the U.S. Department of Defense. Two years ago, the friends decided to use their specialized knowledge of fusel oil reduction to make a GMO-free, gluten-free vodka. With a relentless focus on purity, they relied on a seriously scientific approach rarely seen in a commercial distillery. The payoff came in being able to remove so many compounds from their spirits that the fresh mountain spring water truly shines.

“One of the best side effects of reducing these fusel oils on the consumable side is that it lends to incredibly smooth finishing spirits,” Dorfman said. “Our vodka has such a neutral but clean pallet.”

Operating on a bootstrap budget, Dorfman and Kennerson teamed up with their wives Katrina and Casey to open South Fork Vodka. Word quickly spread that its signature distilling process makes for a crisp tasting vodka that’s also easy on the senses.

“We do get a lot of feedback from people saying they can really have a couple cocktails but still feel great the next day,” Dorfman said. “That’s from reducing those certain trace compounds, which are also the more harshly metabolizing compounds.”

Dorfman and Kennerson thought the best way to grow their company was to let bartenders experiment with their product. Some of the region’s top mixologists liked the results. South Fork has become a go-to vodka at numerous establishments, including Sacramento’s Wildwood Kitchen & Bar, Berkley Bar, Paesanos, B Street Café and Café Bernardo-R15, as well as Pink Martini in Rocklin and numerous restaurants on Highway 49. Fans of the vodka can grab their own bottles at Corti Brothers in East Sacramento.

While the pandemic created a secondary business opportunity for Dorfman and Kennerson in selling hand sanitizer to stores, it’s difficult for them to watch the toll the lockdown continues to take on the bartenders and servers who helped build South Fork’s name. They’re looking forward to when their friends in the service industry can feel more secure, and when the distillery can go back to hosting vodka tastings at local events and street fairs.

News of this double coup by a small, independent distillery did not surprise Kyle Oliver, who owns Pink Martini, a lively, upbeat restaurant that has become a destination in South Placer County for fans of quality cocktails. When he and his bartenders first tried South Fork’s vodka, they were amazed by its sleek effect. He says that opinion is rapidly filtering down to his customers.

“Our patrons love it,” Oliver said. “They’re proud of the fact that it’s local. And now, we’re able to tell them that it’s world class. In this day and age, with all the huge money behind brand-building, and all the celebrities that are getting behind brands and pushing products that really don’t have the quality that measures up to some local projects, what South Fork has done is absolutely exceptional. They’re putting their vodka up against some of the best products in the world, and they’re cleaning house right now.”

Dorfman’s own personal favorite cocktail is a fresh strawberry and lime vodka gimlet, a summer concoction with crushed fruit, squeezed lime juice, a dash of simple syrup and an ounce-and-a-half of South Fork vodka. For him and his partner, news that their unorthodox approach to distilling resulted in two international awards in four months is a sign their dream wasn’t crazy. They may not have the advertising budgets of Tito’s or Grey Goose, but they have the appreciation of first responders across the region—and now the recognition of some of the world’s top experts in spirits.