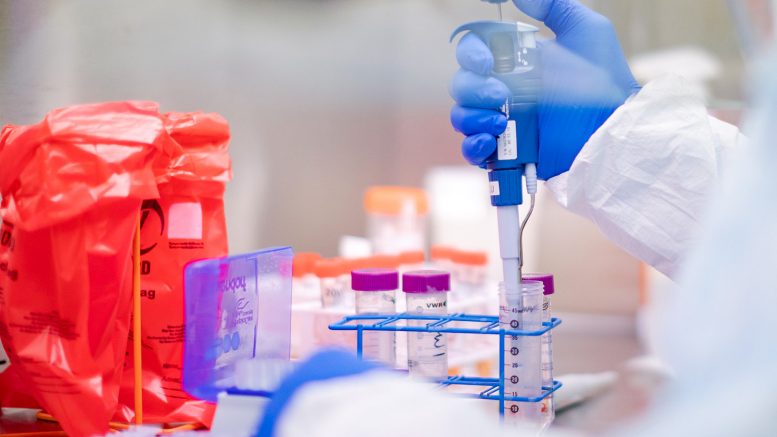 A safe and effective vaccine may be the only way to control COVID-19. (Photo from Creative Commons)

Editor’s note: Pharma firms are racing to find a vaccine, but what if people won’t take it?

Almost every week, there are encouraging early test results on a potential COVID-19 vaccine. Pharma companies around the globe are spending millions to be first. Anthony Fauci, the nation’s top infectious disease official, is optimistic that one will be available by early next year.

That’s great, because a safe and effective vaccine may be the only way to control the pandemic—and for life to return closer to normal. But that only happens if enough people take it.

And that’s a real concern, especially in places including California where the anti-vax movement is strong.

Sacramento County Public Health says it has already started preparing to receive and distribute a COVID-19 vaccine, working with state and federal partners, and is counting on them to provide “evidence based messaging” for the public.

The anti-vaccination movement has already made an impact during the pandemic. Freedom Angels helped organize the May protests at the state Capitol, where Trump supporters, religious conservatives and others successfully demanded that Gov. Gavin Newsom loosen stay-at-home orders.

For years—despite deadly outbreaks of whooping cough and measles—anti-vax activists fiercely fought state lawmakers when they required children to be vaccinated to attend school and limited exemptions based on personal beliefs.

But it’s not just anti-vaxxers: There’s plenty of skepticism in the general public about a coronavirus vaccine, particularly with President Trump suggesting one might be available before the election.

In a poll released Sept. 10 by the Kaiser Family Foundation, 62% said they worry that political pressure from the Trump administration will lead the U.S. Food and Drug Administration to approve a vaccine before it is proven safe and effective, 81% said they don’t believe one will be ready before Election Day and 54% said even if one was, they would not want to get vaccinated.

Also, 39% of respondents said that the FDA and 42% said the Centers for Disease Control and Prevention are paying “too much attention” to politics in reviewing and approving treatments for coronavirus or issuing COVID-19 guidelines and recommendations.

In other recent polls, most respondents said they wouldn’t take a vaccine immediately. That resistance is growing, according to Yahoo News/YouGov surveys—from 55% in early May saying they would get vaccinated to 50% in late May, 46% in early July and 42% in late July.

Because COVID-19 vaccines are being developed far faster than normal, some fear serious side effects. That adds to existing doubts about being vaccinated against longstanding diseases. And there’s distrust of both science and government, as shown by the difficulty persuading people to wear a mask to stop the spread of coronavirus.

A new study shows that only 80.5% of kids in California took recommended vaccinations, well below the national average of 85% and the third lowest percentage of any state. For children born between 2011 and 2016, California ranked dead last among states for receiving the recommended dose of the combination vaccine for diphtheria, tetanus and whooping cough—77.5%, compared to the U.S. average of 85%. While children who get infected with COVID-19 are less likely to get seriously ill or die, they can spread the virus to older and more vulnerable adults.

The study also found that 68.9% of Californians 65 and older got the vaccine that protects against pneumonia, meningitis and ear and sinus infections. That ranked 10th lowest and well below the national average of 73%.

According to the analysis of federal data by healthtestingcenters.com, about 43% of Californians got their flu shot in 2018-19, below the national average of 46%. Experts fear that a second wave of COVID-19 in the fall and winter, coming at the same time as the seasonal flu, could be even worse and overwhelm hospitals.

County public health officials “will draw from our flu vaccine delivery model, modified to include COVID precautions, as well as lessons learned from the 2009 H1N1 pandemic to ensure the vaccine is administered in a safe and timely manner,” the department said in a statement to SN&R.

Public Health received $4 million to prepare for and conduct community vaccination clinics for COVID-19 and the seasonal flu as part of a $45 million funding boost that county supervisors approved Aug. 19.

Federal officials are telling public health departments to be ready as early as Nov. 1 to distribute vaccines, though many experts don’t believe that one will be ready by then and critics say it’s a move to help President Trump win reelection.

Meanwhile, UC Davis Health announced Aug. 12 that it will take part in a global vaccine trial, working with Pfizer Inc. It is looking for as many as 200 participants, who are healthy, between 18 and 85 and, ideally, who work in health care or retail. Blacks and Latinos are being encouraged to participate since they have been disproportionately affected.

Under withering criticism for its response to the pandemic, the Trump administration is pinning its hopes on “Operation Warp Speed,” an effort to deliver 300 million doses of an effective vaccine by early next year. Late last month, the federal government signed a deal worth as much as $2.1 billion with Sanofi and GlaxoSmithKline. There are smaller agreements with AstraZeneca, Johnson & Johnson, Moderna, Novavax and Pfizer. More than 150 potential vaccines, some using unproven methods, are at some stage of development around the globe.

But if a real vaccine is developed, it may only keep people from getting seriously ill—not make people immune. There are concerns that it won’t be as effective in obese people, who make up a third of all Americans. And if a vaccine does provide immunity, it may not last that long.

To achieve “herd” or community immunity, public health experts say that at least 60% to 70% of the population must be immune, either through getting vaccinated or by producing their own antibodies after contracting COVID.

But Fauci has warned that if a coronavirus vaccine is only 70% to 75% effective—and if only two-thirds of the population is vaccinated, that likely won’t be enough for widespread immunity.

And that would mean a vaccine isn’t a silver bullet after all to stop the pandemic’s deadly rampage.