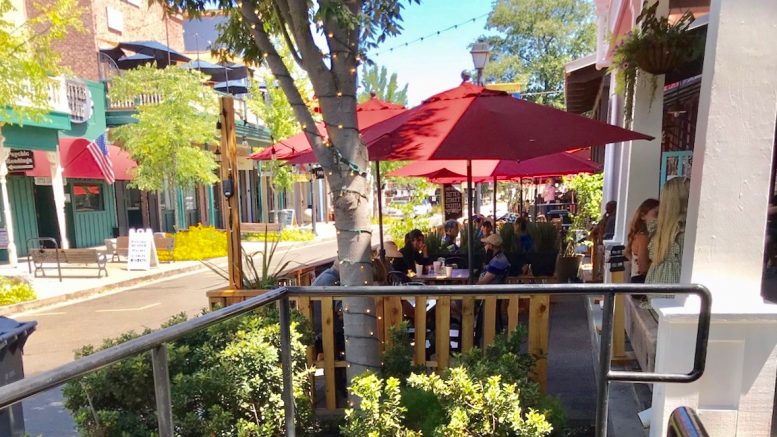 After Folsom and Roseville saw cornerstone dining hubs permanently closed by COVID-19, they are now adapting on the fly

Some of the region’s most historic avenues have donned a new look overnight, morphing the traffic lanes and parking spaces into scenes that resemble the sidewalk cafes of Europe.

The sudden changes weren’t made for aesthetics or for the latest dining trend. Rather they are the latest strategy for restaurants, cafes and tap houses to survive Gov. Gavin Newsom’s rollback on reopening the economy due to COVID-19.

To some extent the street-side improvising is working, though the experiments depend on summer weather. That’s left some of the businesses wondering if these sunny days can outlast the current lockdown.

For the business owners who have staked their futures on Sutter Street, accepting more business casualties isn’t an option. Several weeks ago, the Folsom City Council passed an ordinance allowing them to begin converting most parking spots along the lauded avenue into outdoor dining spaces.

Playing on district’s Victorian architecture and Gold Rush roots, these makeshift “parklets” are surrounded by ranch-style wood fences that organize which sections belong to which restaurants, while also providing some protection from slow-moving traffic on the street.

On a bright Wednesday afternoon, the new tables in front of the Sutter Street Taqueria were full as people ordered Tex-Mex treats under the stretching shade of umbrellas. Further up the street, Lisa Gomez, owner of Citizen Vine, was moving signs outside as she prepared to open in a few hours. Citizen Vine’s tasty tapas and curated selection of California vino has earned it a loyal following. Now, the new street dining spaces are allowing something resembling its regular evening crowd to show up again for pairing wine with stellar pesto chicken and bacon flatbread or succulent Ahi tuna crisps.

“So, for the weekend we can have people dining al fresco on the street, too,” Gomez told SN&R. “We are very excited.”

In Roseville, a handful of risk-taking business owners have spent the last decade trying to make historic Vernon Street a unique destination among the region’s plethora of entertainment options. Much of the avenue’s tidy architecture dates to World War I and the Jazz Age and includes two of the area’s oldest theaters that are still in use: the Roseville Theater, built in 1926, and the Tower Theater, which opened in 1940.

Through public-private partnerships and entrepreneurs rolling the dice, the city of Roseville has moved closer to its vision of a Vernon Street where patrons from art galleries and live theater events flow seamlessly into a diverse set of restaurants and cafes. Lately, the street has been gaining attention for the highly-rated gastropub and brewery, Monk’s Cellar, as well as Steve Kwon’s audacious Ninja Sushi and the timeless East Coast Italian restaurant, the Place. In 2019, the Goose Port Sports Bar became the newest addition to Vernon Street’s culinary scene.

But the shutdown in March briefly turned Roseville’s downtown turnaround into a lifeless scene again. Then, between California’s re-authorizing of indoor dining and quick sapping of it again, Vernon Street suffered its own business causality: Ninja Sushi. That means a historic department store that the city has already spent millions on to renovate is empty once more, following an earlier, notable failure with rocker Sammy Hagar’s eatery.

Trying to help the other restaurants avoid that fate, Roseville began exploring whether it could close parts of Vernon Street for expanded outdoor dining. One problem is that the street has a curve, which causes sloping issues around the gutters. That meant there could be challenges with the stability of dining tables, as well as access problems for people with disabilities. There were also non-dining merchants on Vernon Street who were worried closing the street would hurt their foot traffic and deliveries.

“We’d already relaxed our encroachment permits, and we were giving them out and just letting people be on the sidewalks, and being less picky there,” said Roseville City Councilman Scott Alvord, who previously owned a café on Vernon Street. “But if you only have the sidewalk, and you can only fit a few people there, you can’t even cover payroll.”

City staff and the Downtown Roseville Partnership tapped an engineer to design special wood decks with protective handrails and disabled access. Each deck runs out from the sidewalk and over several parking spaces. All of Vernon Streets eateries either have the decks now, or will in the coming days.

Alvord said that it is clear from recent conversations that it’s not just restaurant owners on Vernon Street who are happy about the new efforts.

“Audacity, which is a store with eclectic art for home furnishing, is really excited about the decks,” Alvord noted. “It’s because the people that come down to eat, they also shop. So it brings people to the other businesses. That’s the goal, to bring people down there.”

In late July, data from the restaurant review platform Yelp indicated that more than 16,000 U.S. restaurants have closed forever due to COVID-19 lockdown restrictions. In an industry known for high overhead and paper-thin profit margins, some economists have predicted this trend will only grow worse in the fall and winter.

With that writing on the wall, Sacramento has also expanded outdoor dining while Grass Valley has opted to close off entire sections of streets for expanded tables.

Grass Valley moved forward with the strategy on Mill Street, its most historic, photogenic and tourist-friendly draw. The street’s specialty stores and art galleries are flanked by seven restaurants and an array of cafes and wine bars, none of which could realistically use much of the sidewalks.

But on July 16, Grass Valley’s staff, volunteers and business owners transformed Mill Street within 24 hours, shutting off roughly half of it off from traffic as they put up long rows of trees and plants. Coupled with dozens of umbrellas, this foliage has left the newly added tables fairly shaded even during the hottest part of the afternoon.

The businesses on the side of the street still open to cars weren’t left out of the plan. For them, the city erected concrete barriers around parking spaces to create expanded seating areas. Grass Valley used the same tactic for several bars and restaurants along its busy Main Street. Grass Valley is now expanding its closure of Mill Street to include more businesses.

Bob Thompson, owner of the popular Cork 49 wine bar on Mill Street, said the new alterations are critical. Last Saturday his new outdoor seating area was totally full as he poured selections of vino from all around the world.

“It’s been going a lot better since we did this,” Thompson said. “There’s been a lot more business over the last two weeks, which is helping me make up for the months of lost revenues. What I say is, ‘Any day I’m able to be open is a good day.’”