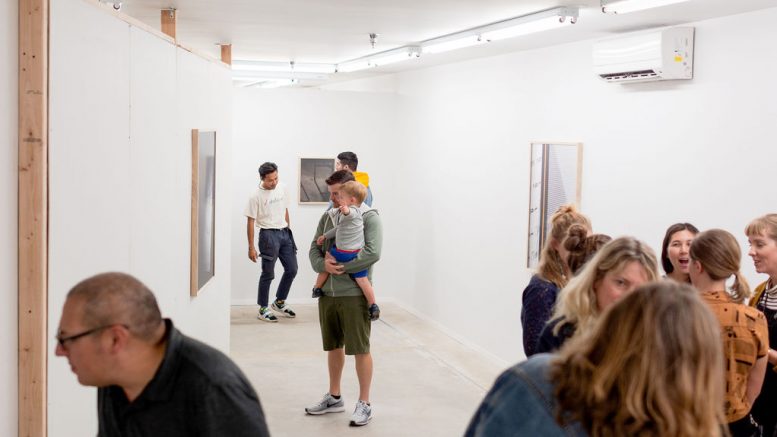 When Richard Gilles first stumbled across Axis Gallery in 2006, he found a small group of people gathered in a building on 19th Street seemingly in the middle of a meeting. The Bay Area native was searching for a way to fit into the Sacramento arts community. What he discovered in Axis was one of the longest-running artist cooperative galleries in Sacramento, one that focuses more on exhibiting interesting contemporary artwork than making sales.

“It’s a community,” Gilles said, who is now the gallery’s president. “You’re helping each other out, you’re getting to know each other, you’re getting feedback on your artwork, more honest than what a commercial place would give you.”

But in the three decades Axis has been around, nothing has threatened its future quite like the coronavirus pandemic. While it has roused worries about the financial stability of the gallery, Gilles remains confident that it is only a temporary roadblock for the cooperative’s artists.

“I remind them quite often: ‘This is not my gallery. This is our gallery,’” Gilles said. “The other artists are really, especially during this period of time, are really stepping up.”

Axis is not alone in the difficulties caused by the pandemic. One example is Axis’ sister gallery, Verge Center for the Arts. It shifted toward virtual programming, hosted its annual TV Dinner event online in April and moved several classes to its website

Still, when Axis reached out to Verge for assistance, founding director Liv Moe formed a team to support the gallery with rent relief and help it transition to a nonprofit.

Arts institutions across Sacramento have closed their doors and— in some cases— canceled longstanding traditions.

Archival Gallery on Folsom Boulevard has restricted access, allowing private visits by appointment only. In March, it abandoned its Second Saturday tradition for the first time since its inception in the 1980s.

“We miss, and look forward to, toasting Second Saturday receptions in the future,” Archival Gallery director D. Oldham Neath, who helped create Second Saturday, said in a statement to SN&R. “It will be a happy day to see people smile without our required masks! And we hope it arrives soon and safely.”

Viewpoint Gallery, a photography gallery on J Street, has remained closed since March. Its annual celebration of photographic art, Photography Month Sacramento, was set to run in April, but was canceled after more than a year of planning.

However, the gallery may reopen in July, according to executive director Roberta McClellan. “It’s been stressful to say the least. Our rent on J Street is not inexpensive,” she said. “We just don’t know how long this is going to last so it makes us all a bit nervous to think that potentially we won’t get back to our ‘new normal’ for a year or more.”

“I think in some respects, it’s an anomaly, and in other respects, it’s really shown us that we need to diversify our income so that we have more than one source that we rely on,”

At Verge, Moe argues that the pandemic has shown how cultural institutions are taken for granted in Sacramento, and could lead to fundamental changes.

“Someone might look at Axis and say, ‘Here’s this organization that’s been around so long, it’s got all these members, it’s doing all these things. They’re going to make it,’” she said. “If we’re not looking out for each other, this could leave deep cuts in the fabric of our cultural community.”

One Axis Gallery tradition heavily impacted by the pandemic was led by its former president Phil Amrhein in 2005, its National Juried Exhibition. “It was exciting times,” he said. “It was a big show, and our members worked really hard to present it really professionally.”

The show supplemented membership dues and arts sales in covering the gallery’s operating costs and eventually became its main source of income, Amrhein said. When Axis received only one-fourth of the expected submissions to this year’s show, the gallery lost nearly one-third of its income.

“[That show] is what makes it possible for us to do all the rest of the things that we do,” said Axis treasurer Roma Devanbu. “We function on a very tight budget—and it’s not a giant budget. We’re able to do the work ourselves and keep things afloat, but that’s a really big loss for us.”

So two days after the show’s June 15 submission deadline, Devanbu—with the help of Axis members Aida Lizalde and Doug Dertinger—created a GoFundMe campaign. As of July 1, the fundraiser surpassed its $5,000 goal and is now closed.

Still, Axis is not out of the dark just yet.

The shock of losing nearly half of its funding during the pandemic prompted discussion among Axis members to diversify income sources.

“I think in some respects, it’s an anomaly, and in other respects, it’s really shown us that we need to diversify our income so that we have more than one source that we rely on,” Gilles said. “The gallery is in the process of doing that right now.”

It is considering more regional or theme-based art competitions to supplement the yearly national show and a print exhibition.

In the long term, according to Devanbu, the goal is to diversify without compromising the gallery’s legacy.

The core values of Axis Gallery have remained consistent even as members come and go, but the ever-changing cast also steers the gallery in new directions.

“We bring in new members, we get invigorated, we get renewed on, we can become a different gallery,” Gilles said. “In a lot of respects, we’re never the same again, and that’s a good thing.”