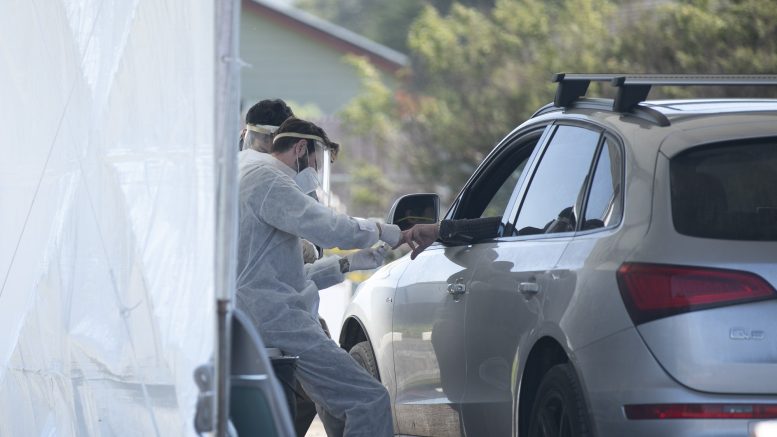 A worker takes a finger prick blood sample at a drive-through COVID-19 testing site in Bolinas on April 22. (Photo by Anne Wernikoff for CalMatters)

The timing was not ideal.

At the same time COVID-19 cases are spiking and Sacramento County is going back into partial lockdown, its public health agency was having difficulty keeping up with demand for testing.

So on July 15, Sacramento County Public Health announced that it and UC Davis had found another partner—StemExpress—for supplies and lab services so all community testing sites can reopen starting next week.

Due to supply shortages, Sacramento County Public Health had to close five community testing sites the week of July 6. The week of July 13, a testing team from the California National Guard stepped in to help start clearing the backlog of canceled appointments.

Each site will only be open for a half day and all testing will be by appointment, starting with people with canceled tests or on wait lists.

“The re-launch of the partnership provides a much-needed service to expand testing that is critical to offer accessible testing led by and within the diverse neighborhoods of Sacramento County,” Public Health said in a statement.

Also available by appointment is drive-through testing at Cal Expo, which opened March 24 and recently conducted its 10,000th test. It is operated in partnership with the California Department of Public Health and Verily.

The eventual countywide goal is 1,500 tests a week, with results turned around within 72 hours.

The shortage of testing supplies is a nationwide problem, again, and could get even worse as schools reopen elsewhere.

On July 15, Sacramento County schools officials announced that more than 250,000 children in 13 districts will not return to classrooms on schedule this fall. One reason why is the lack of testing capacity.

Besides wait lists to get tested, there are longer lags for results, which makes them less useful in alerting people that they should go into quarantine and in letting public health officials attempt contact tracing—both crucial to stop spreading the virus.

On July 15, Sen. Dianne Feinstein of California called on President Trump to use the Defense Production Act to increase supplies and sent along a list of needs from Gov. Newsom.

“The bottom line is that we need more testing supplies and we also need to bolster laboratories’ capacity to process tests in a timely manner,” Feinstein wrote in a letter to the White House. “While California is now able to conduct more than 100,000 COVID-19 tests per day, counties are starting to report shortages in supplies, resulting in testing sites closing or needing to prioritize testing to certain individuals.”

Because of the shortage, state public health officials on Tuesday announced new guidelines on who should get tested first, returning to the priority list in the early days of the pandemic. First will be COVID-19 patients and those linked to an outbreak. The second group includes others with symptoms, health care workers and those who work or live in nursing homes, homeless shelters and prisons. Next are essential workers without symptoms. The lowest priority are members of the public—once results can be turned around in less than 48 hours.

But that guidance apparently won’t be completely followed in Sacramento County. “Our contact tracing continues to point back to spread that is often from asymptomatic individuals—in some cases that cause cluster outbreaks before they ever knew they were infected,” Public Health said in a statement. “We feel it is important to continue offering testing to both symptomatic and asymptomatic people as long as we have the opportunity in order to quell the spread in our community.”

During May, the positivity rate dropped to 1% even as testing ramped up, one benchmark that allowed Sacramento County to reopen businesses. Since June, however, the rate has been rising, heading back toward the peak in March and April. The number of cases has also been increasing dramatically. Case counts topped 1,000 in both the weeks ending June 27 and July 4, accounting for 40% of total cases and far exceeding earlier peak of 205 cases in the week ending April 4.

The recent record rise in cases is happening across the state as stay-at-home orders were loosened—and despite a campaign urging people to wear masks in public.

So on July 13, Gov. Gavin Newsom ordered bars statewide to shut down again, along with indoor dining. He also ordered counties on the state’s watch list to close even more businesses. Sacramento is one of those, and effective July 14 again shut down barbershops, fitness centers, malls, nail salons and religious services.

In the meantime, public health officials are again urging those waiting to be tested to stay home and stay away from others if they believe they have been in close contact with someone infected, or have any symptoms.

And, by the way, the federal Centers for Disease Control and Prevention has expanded that list of potential symptoms—cough, shortness of breath or difficulty breathing, or at least two of: fever, chills, repeated shaking with chills, muscle pain, headache, sore throat or loss of taste or smell.

We’re headed in the wrong direction on COVID-19—and that’s even before a second wave in the fall and winter that experts warn could be even more deadly.

Be the first to comment on "Backsliding on COVID-19"