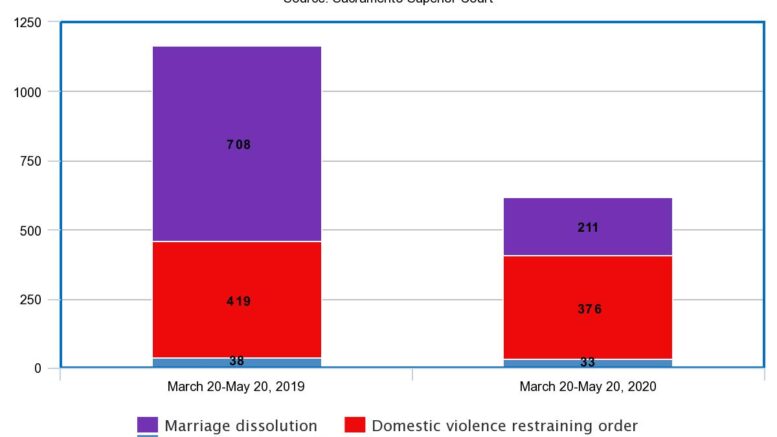 Divorce requests plummeted during the coronavirus pandemic, but not necessarily because couples are happy.

But that doesn’t mean couples are quarantining happily ever after

A funny thing happened after Sacramento County issued its first stay-at-home order on March 19: No one filed for a divorce in the month of April.

Weird, right? Let’s unpack the why of it all.

Like every other institution in America, the court system has been profoundly affected by the coronavirus pandemic. California Supreme Court Chief Justice Tani Cantil-Sakauye ordered a suspension of all jury trials on March 23 because of the high risk of spreading infections in close quarters. Five days later, the Judicial Council of California recommended the chief justice allow superior courts to conduct other business remotely. Sacramento Superior Court began accepting civil, family law and probate filings on May 6. Family court began remote hearings five days after that.

But hundreds of other family court filings were recorded in April, including 271 child support applications and 126 requests for domestic violence restraining orders, so why a monthlong gap in irreconcilable differences?

Part of the reason is that Sacramento County chose to hit pause a bit earlier than other parts of the state.

In an email, Pedersen noted that the filings on either side of April “would be skewed as well because we weren’t open for business for the entire month.”

The pause in divorce filings seems counterintuitive given that we’ve been warned that the pandemic, surging unemployment and government-ordered home confinement could create a perfect storm of stressors for couples staying under one roof.

And while domestic violence arrests have become a bigger percentage of all arrests in Sacramento County, that’s mostly because cops aren’t arresting as many people for other crimes, not because they’re receiving more domestic violence calls.

Advocates have warned that the number of domestic violence calls could be artificially low because it’s even more difficult for victims to escape and call for help.

The Sacramento Police Department recorded a 12.5% increase in domestic disturbance calls for the week that ended May 10, compared to the week following the stay-home directive from Sacramento County’s public health officer.

The Police Department has also seen a 4.7% drop in calls compared to the week before the stay home directive took effect, but a 1.1% increase in calls dispatched.

Divorce filings are down a whopping 70.2% from this time a year ago: 708 dissolution filings were recorded between March 20 and May 20, 2019, back when couples were still allowed to leave the house.

1 Comment on "Stat of the week: Nobody got divorced in April"