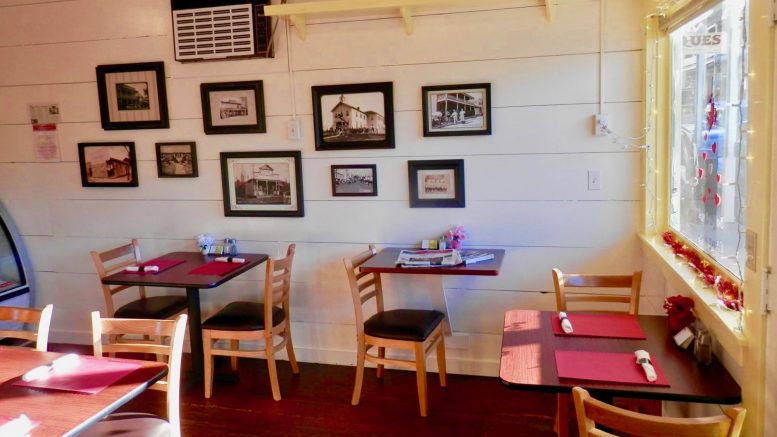 When a rural café lost its co-owner, the community wouldn’t let it lose everything

The couple had been married 27 years. Between Jon’s smoky, savory barbecue skills and Sina’s creativity with sandwiches, Backroads Café had expanded into catering and was gaining momentum.

Then, on the morning of March 3, without warning, Sina woke up, turned over in bed and discovered Jon had died in his sleep. The day after Jon’s funeral—Friday the 13th—the COVID-19 lockdown was announced. At that point, it wasn’t clear if the Hannings’ shared dream could even survive.

Sina was overwhelmed with grief, confusion and a sense that the rudder was completely off the boat. Yet, she soon learned that the family-like approach she and Jon took with their tight-knit staff, the close relationships they’d built with customers near and far and Jon’s constant support of neighboring businesses was all about to bring a kind of calvary riding in to rescue Sina from her personal nightmare.

Four months later, Backroads Café is still above water. Regulars are coming through its doors again, many looking for a little taste of everyday normalcy. And while Gov. Gavin Newsom’s decision this week to hit the “dimmer switch” on indoor dining in California is another setback for Backroads, Sina says the outpouring of community support still has her confident she’ll make it through the most painful year of her life.

It’s a lesson she wants to share with other small businesses owners who are worried and suffering: Don’t lose hope.

The big man on the line

Sina met Jon when she was 19. He was a boisterous, outgoing people-person who loved dirt bike riding and had a great sense of humor. The two first ran into each other at a little Mexican restaurant in Concord.

“I wasn’t even old enough to drink at the time,” Sina remembered with a laugh, “but I had my first margarita with him.”

In 2000, the couple moved to Sutter Creek, a Gold Rush-era town known for its Victorian architecture and its emerging place in Northern California’s wine scene. Sina got a job as a barista at Backroads Café. Its owner at the time, Cely Gardella, taught her that the secret to a popular menu was keeping things simple and consistent. Later, a new owner bought Backroads and changed its vision and atmosphere. Sina worked at the other version of the café for years before she got a chance to buy it herself.

Sina was eager to bring the business back to its roots. “I wanted all those kids who’d grown up in this county to still get their favorite sandwiches and drinks, and just kind of have that feeling of home again,” Sina recalled. “Rather than being something new and hip, I wanted to make it old school.”

Jon dove head-first into that mission by bringing his passion for barbecued meats into the fold. He also did the heavy lifting for the day-to-day operations, handling the accounting, books and payroll. When Jon wasn’t cooking on the breakfast line or walking orders over to customers’ houses, he was serving as president of the Sutter Creek Business & Professional Association, strolling up and down the city’s historic main street each day, checking in on the other mom-and-pop storefronts. Jon’s fountain of energy was something Backroads employee Faith Goncalves admired.

“Even as busy as he was, he would stop, just for a moment, to talk to anybody,” Goncalves remembered. “He’d help them out, make them feel better. He was always really good about that … He was a mentor for us, awesome with our customers and an amazing cook.”

Jackson Israel, who’s worked for the Hannings the entire time they owned Backroads, appreciated all the ways Jon helped him grow.

“For me, it was a lot of learning, because Jon was showing me so much about cooking than I’d never known before,” Israel said. “He was a teacher and a close friend that I could always laugh with. I felt like I could talk to him about anything at work.”

There were some warning signs about Jon’s health, but nothing that alerted Sina to the magnitude of the danger. Jon, who was 55, had recently found out he was diabetic. In the week leading up to his death, he appeared bloated. There was also a wound on his leg that didn’t seem to be healing. Doctors later told Sina that Jon had died of a massive heart attack during the night.

Sina knows exactly what was going through her mind that moment in bed she realized Jon was cold.

“It said to myself, ‘OK, as soon as I call 911, my life is going to totally change forever,’” she recalled. “So, I kind of waited and just laid with him, and let the dogs lay with him for a bit, and just tried to get my head together.”

Finally, Sina picked up her phone. She braced for the fire trucks, the cars, the neighbors flooding in. Looking back at that surreal week, there are so many “what ifs” that keep floating through Sina’s mind.

“I was bugging Jon to go to the doctor or the hospital, but he didn’t want to go,” she said. “But maybe it’s better he didn’t go, because with this whole COVID thing, he might have died anyway, and died with tubes in his face, while I wouldn’t have been able to see him.”

The Saturday after Jon’s memorial service, Sina was prepared to distract herself by working at the café. She couldn’t do it. The weight of the world was too much. She felt paralyzed. At virtually the same moment, she learned that Backroads Café had to shut its doors anyway, for an unspecified amount of time, due to the COVID-19 stay-at-home orders. Sina had no idea what would happen next.

“I was in the worst, darkest low point of my life,” she said.

Picking up the pieces

It was a phone call from a cafe employee that marked the turning point.

Backroads had been closed for two weeks following Jon’s funeral and the start of the lockdown. Goncalves was chatting with Sina on and off, checking in on her. Noticing other restaurants were starting to do to-go orders, Goncalves had an idea.

“I figured Sina was probably going stir crazy,” she remembered. “In all of the years I’ve worked here, she’s never been off that long before. She’s at Backroads every day.”

Goncalves made an enthusiastic call to her boss, suggesting they throw a new sign on the door, start sending food out and leave tables on the sidewalks for customers to rest and eat. She, Sina, Israel and employee Raven Owing quickly got a take-out operation running.

“When Faith did that, it really got me out of my funk,” Sina said. “And I’m glad she did, because as soon as the locals knew that we were open, they were hitting us almost every day, just coming in all the time … People were surprised I was even able to come back, after everything that happened, but it was clear they didn’t want to see my business gone. They wanted to see me fight on and keep going.”

That doesn’t mean that first month was easy. Relying exclusively on to-go orders meant that Backroads sales were down by 50%. Yet the steady stream of regulars convinced Sina and her team that they could make things work.

Conclaves noticed many people in Sutter Creek weren’t just going out of their way to spend money at the café, but also at other food businesses on the street.

“I’d see somebody would come by here, and grab like a coffee and sandwich, and then they’d would go next door to get something different for dinner,” she said. “I feel like the community was doing really well at supporting the places they cared about.”

Three years ago, Jon and Sina had supported Israel during his own family tragedy, when his brother, Mike—who’d also worked at Backroads—was killed overseas while volunteering to fight ISIS in a Kurdish militia. Israel appreciates and values the family-like environment the Hannings created at the café.

“It was about sticking together,” he said of weathering the last few months. “We stuck with Sina. We’re all that close. We’re not going to leave each other for dead.”

Newsom’s order to roll back reopenings was a blow to businesses owners across the Mother Lode, where most counties continue to have relatively low COVID-19 caseloads, according to the state’s official coronavirus dashboard. But Sina says she doesn’t plan on letting the reversal keep her business or her employees down.

“I think I just have to keep an open mind and know that things might not go back to the way they were,” she said. “When I look back at everything that’s happened, what it’s taught me is to never give up.”

Where will hungry students eat?