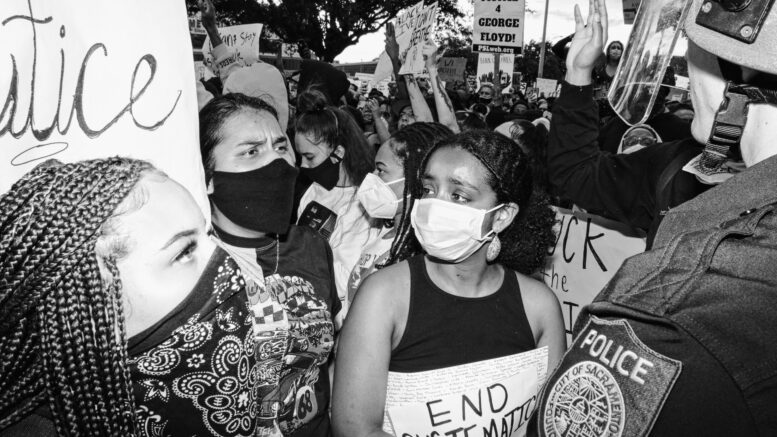 Protestors in the streets of Sacramento are calling for justice for George Floyd and changes in how police do their job. (Photo courtesy of Kevin Gomez Jr.)

Editor’s note: After George Floyd’s killing, there are lots of ideas to change policing. But is there the political will?

If all the protests, marches and speeches succeed in changing hearts and minds, what actual policing reforms could happen in response to the death of George Floyd?

No choke holds on suspects. Independent investigations in police killings. A national registry of bad cops. Maybe even less money for police departments.

All those ideas and more have been floated as protestors and politicians across America call not only for justice for Floyd and his family, but for sweeping changes to make policing better, fairer and less racist.

But will there be the political will—and courage—to overcome any opposition from law enforcement and law-and-order voters? Will real change happen anytime soon? And if it doesn’t, what will activists and protestors do then?

Even as he announced more charges on June 3 against the officers involved in Floyd’s death, Minnesota Attorney General Keith Ellison urged officials not to wait to move forward on broader police reforms.

At a June 2 rally in Houston attended by Floyd’s family, Rep. Sheila Jackson Lee vowed to introduce “revolutionary legislation” that would be named for Floyd and that would change the culture of policing through recruitment of officers, deescalation training and other reforms.

Also on June 2, House Speaker Nancy Pelosi of San Francisco said she has asked the Congressional Black Caucus, led by Rep. Karen Bass of Los Angeles, to lead the legislative response. House Democrats are sifting through dozens of proposals to deal with excessive use of force, racial profiling and other policing issues.

On June 8, they unveiled a sweeping bill, The Justice in Policing Act, which includes requiring body-worn and dashboard cameras for police, banning no-knock warrants in drug cases and allowing victims of police misconduct to use for damages.

Bass attended a virtual event on June 1 with civil rights leaders and Sens. Kamala Harris of California and Cory Booker of New Jersey to demand action. Booker has introduced a bill that would create a national registry of police misconduct, limit legal immunity for officers, ban racial profiling and fund racial bias training for police.

Plus, there’s already a bipartisan push to shut down a Pentagon program, restored by President Trump, that transfers surplus military equipment to local law enforcement. There will almost certainly be more pressure for police departments to give back equipment they procured after the Sept. 11 terrorist attacks.

And as Trump calls himself the “law and order” president and threatens to brandish the U.S. military against protestors, former Vice President Joe Biden, the presumptive Democratic nominee, pledged on June 2 that if he’s elected in November, in his first 100 days, he will ban create a model use-of-force policy, empanel a national police oversight commission and stop the transfers of military equipment.

The vast majority of policing practices and tactics, however, are determined at the state and local level.

Former President Barack Obama said during a virtual town hall June 3 that activists need to pressure local officials, making them uncomfortable but also seeking practical change. He also urged every mayor to review their police use-of-force policies. Obama created a Task Force on 21st Century Policing in December 2014 after the police killing of Michael Brown in Ferguson, Mo., but he acknowledged there wasn’t enough follow through.

Also on June 3, a group of reformers within the ranks of police released a list of recommendations. The Law Enforcement Action Partnership called for establishing a national registry of officers fired for misconduct, creating independent civilian review boards and requiring officers to intervene to stop excessive force by fellow officers, among other changes.

There are already moves around California and the country to change use of force rules.

After Stephon Clark was shot to death in Sacramento and after the two city police officers were cleared of criminal charges, the state Legislature passed Assembly Bill 392 last year that includes the nation’s strictest restrictions on when law enforcement officers can use deadly force. Under the old law, officers could use deadly force when they perceived imminent danger to themselves or the public. Under the new law, an officer must reasonably believe, “based on the totality of circumstances, that deadly force is necessary” to defend themselves or the lives of others.

But reformers failed to pass a bill requiring that the state Attorney General’s office investigate police killings of civilians—not local prosecutors who are often cozy with local law enforcement. Now, it’s likely that there will be another attempt to require independent investigations in California.

While not mandated, the state investigations happened in the Clark case, in which Attorney General Xavier Becerra also did not charge the officers, and in the Floyd case in Minnesota, where Attorney General Ellison raised the charges against Officer Derek Chauvin to second-degree murder and charged the other three officers with aiding and abetting second-degree murder.

After Clark’s death, Becerra’s office issued nearly 50 recommendations to the Sacramento Police Department, including a continued ban on choke holds and further restrictions on neck restraints. But now the department is investigating officers for using the cartoid neck restraint against protestors, which under police policy is only supposed to be used to prevent serious death or injury to officers or others.

Mayor Darrell Steinberg is seeking a review of the continued use of the neck hold, which has been banned by several California agencies. On June 5, Gov. Gavin Newsom called for new restrictions on the “cartoid hold.” “The carotid hold blocks the flow of blood to the brain. It’s a dangerous tactic that should not be used by law enforcement,” the governor tweeted.

In response, Steinberg then tweeted: “Thank you, @GavinNewsom. I support the statewide removal of the carotid hold as an allowable police tactic.” And on June 6, the police department announced that it had ended use of the “cartoid control hold.”

A bill before the Legislature would expand state reviews of use-of-force policies to law enforcement agencies across the state that request them. Another bill would allow counties to increase oversight of sheriff’s departments with civilian review boards and inspectors general. And several Democratic legislators plan to introduce a bill clarifying standards on the use of rubber bullets.

On June 5, Becerra joined others attorney general in urging Congress to give them more authority under federal law to investigate and resolve patterns or practices of unconstitutional policing. “When our communities speak up about their pain, we in law enforcement have to listen and take action,” he said in a statement.

One of the most far-reaching proposals comes from a growing movement to “Defund the Police.” You’ve probably seen the signs and heard the chants at protests. The general idea is take money from local police budgets and give it to community anti-violence programs (such as Advance Peace in Sacramento), as well as jobs, health care and other programs that help over-policed neighborhoods. But you can expect that powerful public safety unions to fight reducing police budgets. In Los Angeles, officials are already looking at taking $100 million to $150 million from the police budget and reinvesting it in the black community.

In Sacramento, the Action Network is circulating an online petition for the City Council to cut the police budget by 30% and for Sacramento County supervisors to do the same for the Sheriff’s Department.

In the 2020-21 budget approved last month by the City Council, the Sacramento Police Department gets more than 25% of all general fund and Measure U spending. The Sacramento police union successfully opposed a ballot measure in March that would have set aside more money for programs for disadvantaged youth.

The city’s new director of public safety accountability is stepping into this heated and important debate. LaTesha Watson, who was appointed unanimously by the City Council last month, is scheduled to start on Monday, June 8. Watson—the former police chief in Henderson, Nev., and the first African-American female chief in that state’s history—says she has a commitment to moral standards, as well as deep experience in developing best practices on officer-involved shootings and improving police-community relations.

“You have to have the strength and courage to do what’s right,” she told me just before she was hired.

Over the next few months, she and other leaders across our nation will have a chance to back up their words with action.

As Steinberg said in a statement after marching and kneeling with protestors in Oak Park on June 3: “The real test of whether these protests will bring lasting change is how those of us in positions of leadership respond two weeks from now or a month from now, when crowds are no longer marching every day in our streets.”