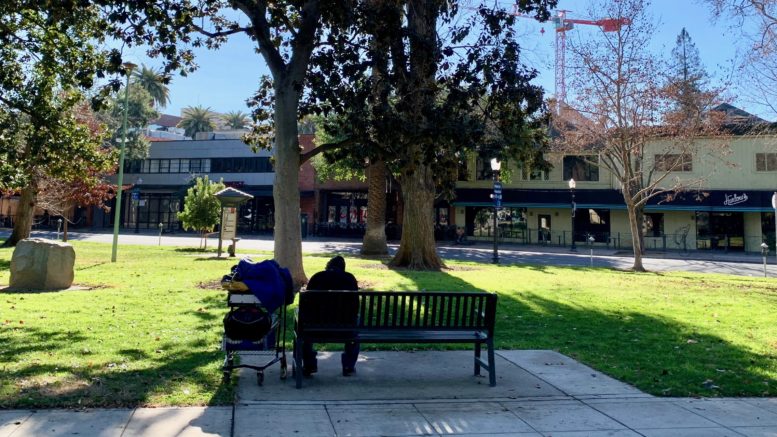 An unhoused man sits on a bench in Marshall Park, just feet away from where another man living on the streets died Jan. 4. (Photo by Scott Thomas Anderson)

It was the type of message George Raya had been worried he might get.

On the morning of Jan. 4, the longtime board member of Sacramento’s Marshall-New Era Neighborhood Association received a text message that something was wrong across the street from his house. Raya stepped outside to find authorities converging on Marshall Park. Approaching, he saw a body covered by a sheet near the front of the Hart Senior Center.

A park ranger told Raya that it was an elderly man, but wouldn’t say more. Raya was immediately worried that it was someone he’d long known who had been living on the streets around Marshall Park for more than a decade.

“We knew each other by name,” Raya said. “He was living outside in the community ever since I’ve been in the neighborhood.”

Due in part to an unusually high volume of deaths in Sacramento last week, the county coroner’s office hadn’t identified the man as of Wednesday.

Raya’s neighborhood association had already been expressing concerns about how the city and county handle their warming centers. The dead body on Jan. 4 only reinforced their concerns.

Sacramento Mayor Darrell Steinberg said in December that the city was “negotiating with the county” to change the criteria for opening warming centers. So far, no announcements have been made on a policy change.

Homelessness took center stage at the City Council meeting on Jan. 5, the day after the body was found in Marshall Park. Council members discussed a new road map on tackling it, along with affordable housing.

“In my district, there was a 65-year-old person found dead,” she said, “on a too-cold night, on a too-wet night, in a condition that barely any of us who are younger could have survived. It’s so frustrating to get call after call—and I knew to expect that when I was elected—from people who are ardently looking for something they can do … and to not be able to tell them anything. It’s so frustrating and heartbreaking when you’re coupling that with the fact that folks are dying.”

Steinberg acknowledged that while the council had focused on opening multiple homeless shelters in the last four years, its approach had been somewhat sporadic and driven mainly by available grants. That strategy, the mayor said, has coincided with homelessness growing even worse in Sacramento.

“Sometimes people wonder, and rightfully so, if what we say is a priority is really a priority,” Steinberg said. “I believe it’s not an overstatement to say that everything we aspire to—the revitalization of Sacramento, the building of a modern economy, inclusive economic development, all of it, all of it—is threatened by this great challenge of unsheltered homelessness and affordable housing.”

“The growth of homelessness, without aggressive action, is immoral,” he added. “The human suffering is unacceptable. It’s affecting our businesses and neighborhoods in ways that have reached the breaking point.”

Steinberg proposed that the council begin work on a new overarching strategy that addresses homelessness and the affordable housing crisis together.

“These tent encampments, which were once sort of an exception or rare thing, are all over the city,” Steinberg said. “There’s people living in squalor and very unhealthy ways, and if you think about, in the middle of the winter, what it must be like.”

Valenzuela supports the road map, though she also requested that city staff update the council on the city’s Tenant Protection and Relief Act. Valenzuela and the council’s other new member, Mai Vang, have expressed interest in potentially strengthening the ordinance since voters in November rejected a stronger rent control measure.

Before the staff’s presentation, the Sacramento Eviction Defense Network submitted a letter to the city that made 19 specific recommendations for improving the act. The suggestions focused on ways to strengthen its protections, effectiveness and accessibility.

“If the city doesn’t listen to the recommendations, it’s making a choice to put families out on the street during a pandemic,” network member Ben Hadley told the council. “It’s going to be a dark moment in a few months with the eviction moratoriums are up.”