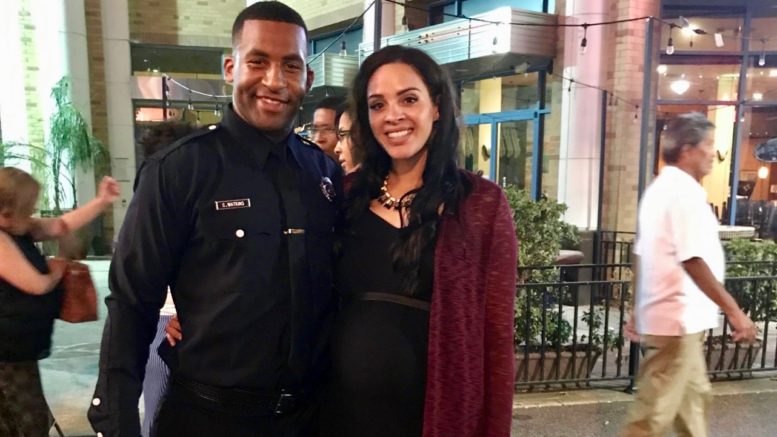 Christian Watkins and his wife Amanda when he worked for the Sacramento Fire Department.

The Sacramento Fire Department was just given the greenlight to enact a program aimed at diversifying its ranks, a move that follows several current and former firefighters allegedly experiencing racial harassment, sexual harassment, bullying and a hostile work environment.

This is not the first time the department’s command has been told by City Hall to get better at recruiting firefighters who reflect the community: Council members handed down a similar directive to former Chief Walt White in August of 2016. However, an investigation by News & Review casts doubt on whether some of White’s supervisors took the previous mandate seriously.

Now, those hoping to improve conditions in the department are wondering if things will be different this time. Sacramento’s new fire chief says he’s determined they will be.

The key to understanding the apparent breakdown between the former chief and elements of his command staff involves Christian Watkins, who is currently a member of the Oakland Fire Department. In the summer of 2017, Watkins was being sponsored to attend the Sacramento firefighters’ academy. Despite the department having just been told by city management to widen its recruitment net, Watkins was one of only three Black hopefuls in a group of 46 attendees. He believes this lopsided balance factored into several uncomfortable exchanges, most notably when he was forced to show up late to a volunteer examine and a classmate openly accused him of wanting special treatment.

Weird conversations aside, Watkins was excited to start working as a firefighter in the City of Sacramento. In theory, the department wanted him, too. An internal audit by the City had recently found its attorney’s office, police force and fire department were overwhelmingly white. In the case of the fire department, 72% of its emergency responders were white – a percentage that’s since gone up.

Given that Sacramento, at that point, had been branding itself as the most culturally and ethnically diverse city in the nation, the audit’s revelations were jarring to many. Then-City Manager John Shirey was told by the Council to form an immediate action plan for change. Larry Carr, who represented District 8 at the time, even promised to hold Shirey “accountable” if recruitment practices weren’t fixed.

Yet, when Watkins started as a probationary firefighter the following year, he’d quickly have little reason to believe Chief White’s command structure wanted him to succeed. Watkins says a dust-up over a personal Facebook post he made caused him to get harassed by fellow firefighters – sometimes in racially tinged ways – and routinely written-up for infractions as trivial as not shaving well enough, or not doing the station house dishes fast enough, or not knowing the metallurgic composition of a saw blade. Watkins says that when his counterparts and supervisor couldn’t break his morale enough for him to quit, they used his paper trail of petty citations as grounds to fire him.

All of this drama, in Watkins’ view, was tied to punishing him for that single Facebook post. When Watkins later read accounts of former Sacramento firefighters Desmond Lewis, Shannon Panameno and Waris Gildersleeve having been harassed on the job, he wasn’t surprised.

So, what was this damning social media crime Watkins committed to cost him his employment – and to cost the City the chance of having a former college football player in one of its most physically demanding jobs?

In November of 2017, when Watkins was assigned to the station in Natomas, he got offered his first overtime shift. His soon-to-be wife Amanda was pregnant, and the couple was excited about starting a family. Watkins took a selfie on his way in to work, though he insists that his badge was glared-out, and that his seatbelt covered the Sacramento patch on his uniform. Watkins posted the pic on his private Facebook account with the playful comment, “On my way to get this Shmoney,” before adding, “making a future for my family.” The term “Shmoney” was popularized a few years before by the hip hop artist Bobby Shmurda. While the post was mainly meant as an inside joke with Watkins’ friends, he acknowledges he slipped up by adding tags, which were “firefighter” and “family first.” The tags caused the post to circulate.

Watkins says that a firefighter within management called him directly and launched into a profanity-laced tirade.

“He called, pissed off, cussing, and said, ‘You need to take that shit down, it’s a f***** disgrace to the department,’” Watkins remembered. “He threatened that, ‘You’re going to lose your job.’ … But you couldn’t see the city I worked for, you couldn’t see my position; and there wasn’t anything degrading to the department in the post – no alcohol involved, no curse words.”

Nevertheless, Watkins respected the request and immediately removed the post. He soon received a second call, this time from a representative of the Sacramento firefighters’ union. While that co-worker chose his words more diplomatically, he too implied that Watkins was in some trouble.

“I’m sitting there, thinking, ‘Didn’t we handle this already? I’ve talked to multiple people about it,” he recalled. “The battalion chief told me, ‘I don’t want to see this shit, it’s a misrepresentation of what we stand for.’ Before he left, he said, ‘You’re on the radar – I’m watching you.’”

Watkins was soon transferred to Station 6 in Oak Park. He says a fellow of Black firefighter warned him to watch his back, because it was a difficult place to work. It was, he was told, “where people go to get fired.”

Watkins soon thought Station 6 was also where people went to get verbally demeaned. He says that on one occasion a firefighter asked him a detailed question about a circular saw – not a piece of gear a 5-month rookie would have much experience with – and when Watkins wasn’t sure about the answer, the man asked, “Did you grow up with a mental disability?”

In another instance, Watkins says, he used the word ‘bruh’ when casually laughing about something, and a firefighter started berating him for it. Watkins’ reaction was to mention that ‘bruh’ was a common expression where he’d grown up in Oakland. He says this promoted his coworker to snap, “Oakland’s the ghetto – it’s the hood. Are you proud that you grew up there?”

Given the large number of African Americans living in Oakland, Watkins didn’t like the implication.

“I think they were basically saying things that they wouldn’t normally say to anyone else who wasn’t of color,” Watkins said.

But what was really grinding Watkins down was how a captain kept writing him up for minor things unrelated to his firefighting skills: his dishwashing speed; not knowing the carbon composition of a saw blade; showing up one time with a five o’clock shadow. Today, when Watkins considers that this gaslighting happened at the same time the department was directed to incorporate more Black firefighters into the ranks, the whole experience seems surreal.

Sacramento Fire Chief Gary Loesch did not work at the department when Watkins was driven out of his job, nor was he there when firefighter Shannon Panameno endured her reported sexual harassment. Loesch has launched investigations into the allegations from former firefighters Desmond Lewis and Waris Gildersleeve about incidents of bullying and race-related hostile work environment that happened under his watch.

Last week, at Loesch’s request, the City Council agreed to provide funding for the creation of a new Diversity, Outreach & Recruitment division, as well as restoring a paramedic internship program that had been successful in getting more minority and women employees into the department.

“I am proud and excited about this new division – Diversity, Outreach & Recruitment, otherwise known as the ‘DOR,’” Loesch told News & Review. “This division will help us better reflect the city we serve. City residents are counting on us to show radical progress with this $2.2 million [in DOR funding], and we will not let them down.”

Sacramento Fire Captain Jaymes Butler saw the development as a very positive one. Butler has long advocated for creating a better work environment by bringing in more firefighters from different backgrounds.

“This allows us to tackle the lack of diversity and equity,” Butler said of the new division. “The 2002 Time Magazine article proclaimed Sacramento as the most diverse city in the country, so recruiting from within would only make sense. We’ve always had people committed to right-sizing the department, and now we have the resources.”

Watkins is now a fulltime firefighter in Oakland. He enjoys working in that department, but still thinks back on his time in Sacramento with frustration.

“To be in constant fear of losing your job, when you have a baby on the way, it’s so much stress,” Watkins explained. “That’s the kind of stress you’re thinking about every single day when it’s happening.”

Be the first to comment on "Sacramento Fire attempts to change course, while another Black firefighter breaks his silence about alleged harassment"