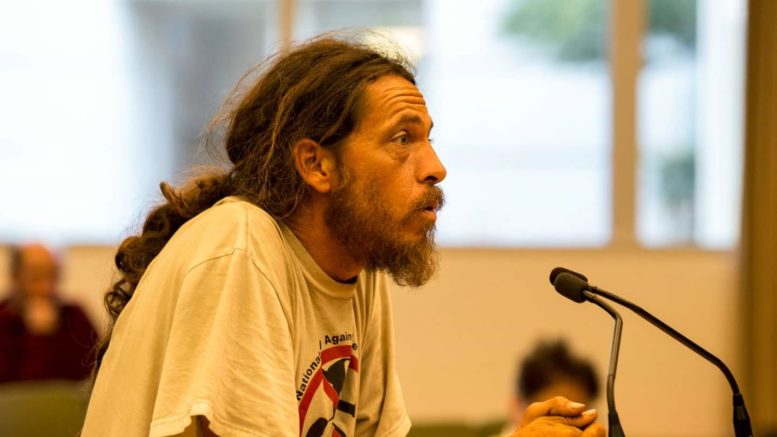 You may have seen me around town with Kozmo, my furry companion. I grew up in Sacramento, living in poverty. As I observed more, I began to see the suffering all around me. I looked closer at the systems that run our lives and how they impact people. In 2011, I joined the Occupy Wall Street movement, where I helped at food tables and learned to organize.

I am running for elected office because our City Council has continually disregarded the community’s concerns, while regularly catering to the interests of large corporations, developers, business districts and investors, often to the detriment of residents. My campaign will address the epidemic of police brutality, protect the environment and promote economic reforms to help raise residents out of poverty.

The city’s police oversight commission should be restructured to have subpoena power, authority to independently investigate use-of-force cases and the power to indict officers who have unjustly brutalized someone. My campaign will demand immediate drug testing for officers involved in any use-of-force situation, a psychiatric evaluation and randomized drug testing for all officers. I will advocate for a civilian-run licensing board for police. Violations of a strict code of conduct would result in fines or loss of the license.

I will address homelessness through a robust set of policies that help individuals obtain essential services specific to their needs. Concepts include tiny home villages attached to a business that employs people at a living wage. We would create sanctioned camping zones—with access to restrooms, water and other services—that move periodically to minimize environmental impacts. Other options include safe parking areas for people living in their cars and multiple small shelters of 20 to 30 beds spread around the city to complete a real “housing first” approach.

Sacramento needs a localized Green New Deal to transform our power structure to one that works with the environment. We could be using city-owned areas along our beautiful rivers to install underwater turbines to generate power and a filtration system to remove toxins. Environmental impact reports should be mandatory for all new development projects to proceed, except for temporary emergency shelter projects. We can plant more indigenous plants and trees to help preserve the environment, and transition from petroleum-based forms of transportation to address the climate crisis. We have the power to create living-wage jobs as we shift to renewable energy sources.

I will propose policies that revitalize communities without displacing longtime residents and instead lift them out of poverty. I will bring back the “big box” ordinance to make it difficult for large corporations to open new locations in Sacramento, and couple this with a tax on large corporations doing business in the city to fund one-year subsidies for longtime residents to open businesses in their communities.

Sacramento needs more low-income, very low-income and extremely low-income housing to meet the real demand. Real rent control and just-cause eviction protections are essential to keep people in their homes. Higher wages indexed to the cost of living and creating green jobs that help make our infrastructure more environmentally friendly would ensure a better quality of life with stability for all the residents of Sacramento.

Be the first to comment on "Essay: Change agent"