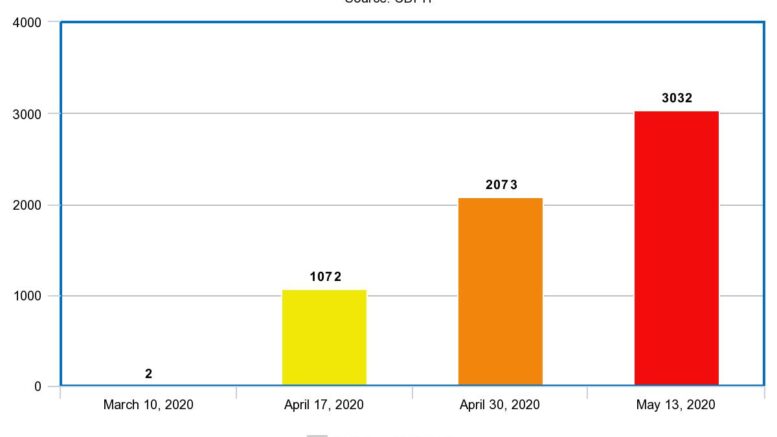 How quickly did California reach grim milestone and why should that give reopen boosters pause?

As less affected parts of the state hurry to reopen retail spaces and restaurants, there’s no guarantee that the pandemic’s deadly pace won’t continue or even accelerate, which Gov. Gavin Newsom tacitly acknowledged during his daily press briefing on Monday, held in a Napa County restaurant.

“Tragically we lost 41 lives in the last 24 hours,” Newsom said, standing in front of a glass display case and chalkboard menu at Mustards Grill. “We cannot impress upon folks more that this disease has not gone away.”

And yet the governor recognized that “cabin fever” had propelled many quarantine-crazed residents to storm the first restaurants to reopen for what was supposed to be a modified sit-down dining experience over the weekend.

As of May 17, there were 2,334 cases and 118 deaths in the five-county Sacramento region, most of those clustered in Sacramento and San Joaquin counties. The highest death rate in the region was in Yolo County, where 182 cases and 22 deaths equaled a 12.1% mortality rate. Most of those deaths have been traced to a skilled nursing facility in Woodland.

Statewide, there were 80,430 cases and 3,302 deaths as of May 17, equal to a 4.1% death rate, which is exceptionally high considering that California has been locked down for two months.

“California adults who are Black, Latino, or Native Hawaiian / Pacific Islander have disproportionately more deaths for their share of the population. Structural racism, poverty and the increased likelihood of having underlying conditions, such as heart disease and asthma, are likely to contribute to this disparity. While male and female Californians have a similar rate of confirmed cases, males account for a greater percentage of total deaths.”

And yet on Monday, Newsom was guardedly optimistic that much of the state could reopen on a quicker time line than expected, saying sporting events without fans could occur as early as June. The main reasons for his optimism were the expansion in testing and a 14-day decline in hospitalizations and ICU admissions, which means that California can better track the disease and ensure that it has enough capacity to treat those who need it.

But Newsom also outlined new guidelines that would give counties greater flexibility to reopen only if they attest that hospitalization rates and new cases are stable or declining; possess adequate testing, contact tracing, PPE and hospitalization capabilities; and countywide containment plans in case of a new outbreak.

“The stronger criteria combined with those broader trend lines—a lot has changed since May 2nd,” Newsom said in response to a reporter’s question.

Confirmed coronavirus hospitalizations peaked at 3,497 on April 29, with confirmed ICU cases hitting a high of 1,241 on April 20. Both figures have dropped: 3,025 individuals were hospitalized with COVID-19 on May 16, including 1,069 patients admitted to intensive care.

Still, much depends on Californians following evolving health rules that the state has been reluctant to enforce.

Over the weekend, unmasked patrons swamped Sienna Modern America Grill and The Purple Place in El Dorado Hills, which opened for dine-in lunches and dinners in a county that has reported 65 cases and zero deaths.

Meanwhile, at two Starbucks drive-throughs in Granite Bay and Roseville on Sunday, employees wore masks and the woman working the first window had customers scan and retrieve their debit cards without touching them.

A hodgepodge approach to statewide reopening guidelines could result in outbreaks in areas that have been largely spared. Newsom noted that new requirements for containment strategies and proof of testing capability were, in part, a response to concerns over honest testing and to ensure that counties weren’t keeping their COVID-19 figures artificially low to justify reopening. He urged businesses to take seriously their responsibility to protect their customers and employees.

“All of us have to do more and more,” he said, to continue “meeting the moment as we have in this state.”

Be the first to comment on "Stat of the week: 3,000 coronavirus deaths"