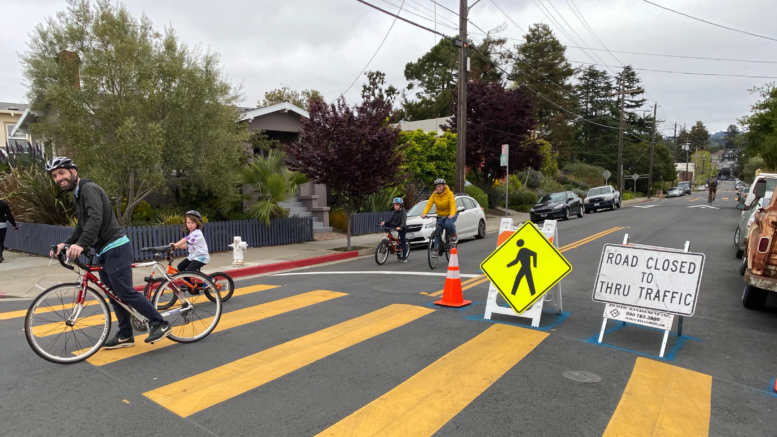 Oakland has closed 20 miles of residential streets to vehicles during the pandemic. Could Sacramento do the same? (Photo from city of Oakland)

Sacramento looked, but decided against closing some residential roads to prioritize pedestrian safety during the COVID-19 pandemic

The city of Sacramento has decided to pass on the “slow streets” movement, which calls for closing stretches of residential streets to vehicles and prioritizing street space for pedestrians and bicyclists. The idea has zoomed in popularity during the COVID-19 pandemic as more people walk to exercise while still trying to keep a safe distance from others.

But on June 10, the city said that after “careful consideration,” it decided not to proceed with a pilot project on two or three streets.

After a survey of residents, the city “determined that it did not have enough information to begin implementing this program in the neighborhoods it had hoped to serve,” a city spokeswoman said in a statement. “Instead, the City plans to use the staff time that would have been allocated for the slow streets program to focus on continuing to strengthen relationships and communication with all neighborhoods within our city.”

The city said it had looked at prioritizing disadvantaged communities, neighborhoods that do not have nearby access to parks and parkways and corridors with schools or community centers serving meals, while not putting the pilot in anywhere without support.

“We were also becoming aware of the unintended impacts that slow streets have had in communities of color in other cities, where implementation often occurred too quickly and with little to no input,” she writes in an SN&R community essay.

Her group and WALKSacramento took the lead in urging city officials to proceed with the “slow and active streets” program, already in place in about 30 cities worldwide, including Oakland and San Francisco.

“Sidewalks and bike lanes are more crowded than ever, often forcing residents to move into traffic lanes just to maintain a 6-foot distance. Additionally, while we are pleased to see that parks and green spaces have remained open to provide valuable physical and mental health benefits, it is clear that there is an overwhelming demand for safe spaces to exercise while obeying stay at home orders. The current capacities of our parks and trails are not enough to uphold public health and safety standards,” the groups say in a joint letter to Mayor Darrell Steinberg.

In an online petition signed by more than 850 residents, the two groups make clear, however, that “slow streets” are not designed to encourage street parties or large gatherings.

Instead, the priority should be on routes so people can get safely to essential businesses and services, including testing sites, and in neighborhoods where green space and healthy food is less accessible.

The advocates say the city should restrict traffic on neighborhood streets to residential and emergency vehicles only; implement “slow street” routes to parks and essential businesses; and identify low-traffic alternatives to major streets for walking and bicycling. They also urge the city to accelerate pedestrian safety projects in major corridors including Broadway, Freeport Boulevard and Stockton Boulevard. Nearly half of the city’s traffic deaths involve pedestrians.

The two groups worked with the city on the online survey that ended May 27 and that asked whether during the stay-at-home order you have seen more people walking or bicycling in the middle of the road due to crowded sidewalks, or more cars speeding through neighborhoods.

The survey also asked which transportation issues are important during the pandemic: slowing traffic speeds in your neighborhood; creating a more comfortable space to walk, jog or bike; and creating more space along routes for people walking and bicycling to essential locations such as schools, groceries, clinics and bus stops.

Finally, the survey asked for recommendations of streets, or portions of streets, to close. They must must be residential, have no more than two travel lanes and have a posted speed limit of 25 mph.

In a May 18 progress update, the groups had said they are partnering with the city to identify two to three corridors of streets that could be slowed to through traffic. City officials met several times with the two groups and evaluated issues such as inadequate sidewalk space, access to parks and to essential services and equity among neighborhoods, but also budget constraints.

While Sacramento County public health is allowing more and more businesses to reopen, gyms will be among the last ones.

Banks had said that the city should continue with “slow streets” even after the stay-at-home order ends.

“Definitely, more people and families are out and about on streets, so we want to continue to encourage that,” she said in an email.

Banks also pointed out that summer camps and other activities for children will be limited, so they will need other options in their own neighborhoods. And she said that it appears that fewer workers will return to the office as tele-working becomes more common, “so more folks will need a regular exercise program, and slowed streets become the new gym.”