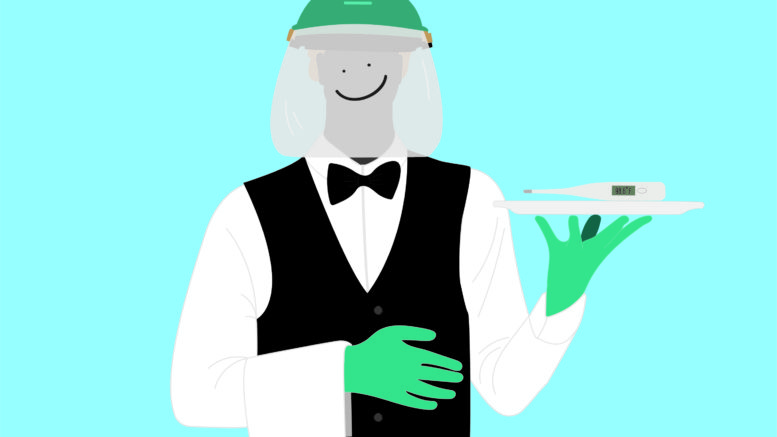 "Would you like to hear today's Foodarackacycle specials?" (Illustration by Rachel Mayfield)

It’s been (another) hectic week. Here’s some news you might have missed.

Table for one, please

California’s chief good news/bad news breaker, Gov. Gavin Newsom, patted us all on the backs this week for flattening the infection curve by playing the home version of freeze tag, and let us know that our reward will be an incrementally faster route back to lives that don’t look or feel much like we remember.

“Normal this will not be,” Newsom cautioned Tuesday.

One example proved the most illustrative: Imagine finally being able to go out to your favorite restaurant again—except your temperature is taken at the front door, half the tables are gone and a server wearing a mask and gloves hands you a disposable menu before discussing the day’s specials.

Which will probably shoot out of a pneumatic tube in a shrink-wrapped cellophane bag. Finally, the future The Jetsons promised is here!

The sobering truth is that until Californians have built up a reliable herd immunity to COVID-19 and there is a widely available vaccine, life will continue to be different, Newsom explained.

Offices and businesses will be expected to reorder their floor plans and reconsider maximum occupancies to allow for physical distancing, masks and gloves will become business attire staples, that plexiglass shield will now protect your bank teller from bullets and invisible spit, your bartender will look like your dentist and your dentist will look like she’s about to deep clean the belly of a radioactive whale. All this plus vulnerable populations will remain under recommended restrictions, and individual cities or counties can snap back into full lockdown if there are new outbreaks.

If this all sounds, well, disappointing and still kind of scary, think of it this way: You could live in a state that’s still in the denial mode when it comes to the five stages of coronavirus grief.

“We are not out of the woods yet and we are not spiking the ball,” Newsom reminded California during a week when deaths approached the 900 mark. “There’s no light switch here. I would argue that it’s more like a dimmer.”

As for when California will reopen, Newsom said to ask him in early May, when officials have inventoried their stockpile of personal protective equipment. “Let’s not make the mistake of pulling the plug too early,” he said on lifting the lockdown. He doesn’t want to make a political decision that could cost additional lives and hardship for an already leveled economy, he added.

P.S. He never mentioned the president by name or title.

The (house) party is over

Not often credited for their restraint, cops in Sacramento County have been taking a pretty light touch when it comes to reminding the public that it’s actually illegal to violate the public health order requiring them to mostly stay home.

Well, the honeymoon period is over, and apparently we have Vin Diesel fans to thank.

On Easter Sunday, no less, the Sacramento County Sheriff’s Office and Sacramento Police Department fielded complaints about multiple “sideshows” revving up in their jurisdictions. Basically, the term refers to nighttime congregations of gearheads, peeling donuts and showing off in nitrous-powered sports cars and souped-up racing bikes.

The county District Attorney’s Office and Sacramento Police Department say the April 12 sideshows drew a hundred or more people and that one police vehicle was damaged, though they don’t specify how that happened.

Booking logs show that only one person was arrested for reckless driving that evening and it’s unclear if it was related to one of the sideshows. The driver was also cited for child endangerment, marijuana possession and evading arrest.

But it’s not just car bros who are making with the fast and furious fun times. Cops have been responding to large house parties over the past three weeks, events that authorities say undermine the efforts to limit COVID-19’s spread in Sacramento, just like those churches that refuse to tell their congregants that God won’t be mad at them if they worship from home.

As a result, authorities will begin enforcing “blatant” violations of local and state isolation orders, which are considered misdemeanors and can bring as long as three months in jail and a $1,000 fine.

“We know that the vast majority of our community will continue to comply with the Public Health Order, and an educational approach will still be effective,” Sacramento police Chief Daniel Hahn said in a statement. “This move towards limited enforcement addresses those that blatantly put the community at risk by engaging in obvious violations of the Public Health Order.”

Who knew that cars, kegs and megachurches formed the outlaw trinity?

The Center for Violence-Free Relationships in Placerville has not seen an influx of calls for services during the coronavirus lockdown—yet. Executive director Matt Huckabay says that may be because domestic violence victims are stuck at home with their abusers.

“It reduces the window for people to contact us or come see us,” Huckabay said of the statewide stay-at-home order.

But Huckabay says law enforcement is responding to more potential domestic violence situations in El Dorado County, which suggests the calm before the storm isn’t all that calm.

“What we are seeing are higher callouts for law enforcement,” Huckabay told SN&R. “That’s usually the first indicator for us.”

In Sacramento County, for the week ending April 14, authorities made 78 arrests for alleged violence against an intimate partner, and another six for endangering children. That’s actually down from the 95 arrests made over the seven-day period that ended March 27.

That doesn’t sound like what Huckabay is hearing in his rural county, where the center’s 18-bed emergency shelter was full on April 10.

“Once things return to a somewhat more normal state … I’m anticipating a wave of people coming in,” he said.

Stolen sample sets off a race against overreaction

A 40-year-old Davis man walked into a hospital and stole a COVID-19 test sample.

What felt like the setup for an unfunny prank or a ripped-from-the-headlines Criminal Minds episode resolved 24 hours later with the suspect in custody and a message of compassion from the officers who arrested him.

A surveillance camera from Sutter Davis Hospital recorded the man—a light blue surgical mask pulled under his chin, a paper cup in one of his gloved hands and dressed neck-to-toe in dark clothes, including a UC Davis sweater—walking through an automatic sliding door on the afternoon of April 11. Davis police say they located the snatched sample hours later in a CVS shopping cart.

It turns out police were familiar with their suspect, later identified as Shaun Moore. A patrol officer spotted him riding a bicycle across the Richards Boulevard overpass the following morning and took him into custody without incident. While Moore was booked into the Yolo County jail on burglary charges, police emphasized that detectives were looking into his mental health and didn’t believe Moore meant any harm.

This is what good community policing looks like in a nerve-racking time.

Be the first to comment on "The roundup: Restaurants of the near future, a domestic violence ‘wave’ and what happened to that stolen COVID-19 sample"