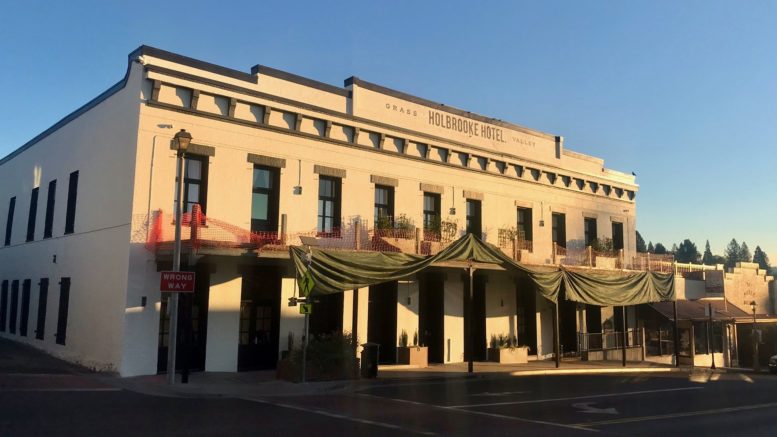 While most of Main Street Grass Valley was closed during the coronavirus lockdown, construction crews continued to restore one of the most historic hotels in California. (Photo by Scott Thomas Anderson)

After months of work, one of the most historic hotels in the West can take visitors back in time

For 169 years there’s been a hotel standing at 212 West Main Street in Grass Valley. An inferno claimed its first incarnation in 1855, but the structure that rose from those ashes went on to become the longest continuously operated hotel in California—and one of the oldest functional landmarks in America west of the Mississippi.

It has hosted famous generals, notorious outlaws and pathfinding writers. Its windows have looked out on fights, fires and fortunes that went boom and bust on the thirst for gold.

Now, the Holbrooke Hotel has just completed an 18-month renovation aimed at recapturing its original glory. Its owner hopes that once the pandemic ends this transporting pearl of the Mother Lode will draw tourists from far and wide and become a cultural cornerstone in Nevada County.

The hotel officially opened its doors again to the public Nov. 7.

The Holbrooke started its life as the Golden Gate Saloon just two years after James Marshall discovered gold 40 miles south in Coloma. Mining camps popped up all over the Sierra foothills as the deep and abundant quartz gold veins that ran under Grass Valley quickly made it an epicenter for the rush for riches.

Late on the night of Sept. 13, 1855, a blaze erupted inside the United States Hotel, which was only blocks away from the Golden Gate Saloon. The night sky turned hellish colors as a wall of flames engulfed the town. Miners and merchants tried desperately to contain the fire, but it scorched much of Grass Valley to a cinder, leveling at least 300 buildings across 30 acres. It was a turning point, both for the city and the future of the Holbrooke.

“In the most destructive way, the fire signaled the transition of Grass Valley from a Gold Rush boomtown to a more permanent settlement,” said historian Gary Noy, whose book “Gold Rush Stories” covers the disaster extensively. “There were more fires to come, and civic growing pains, but, in the aftermath, Grass Valley entered into a new phase: It was no longer a mining camp, it began to develop into a community.”

That community wanted the Golden Gate Saloon back, but on a much grander scale. The lavish bar and hotel that took its place became the “it” spot for luminaries touring the northern Gold Country. Former Union general and President Ulysses S. Grant stayed there. A young Mark Twain also took a room there on the eve of his groundbreaking comedic lecture in Grass Valley in 1866. The hotel was eventually renamed the Holbrooke in 1870 when D.P. Holbrooke took control.

Over the building’s lifetime, various owners made additions, renovations and alterations. In 2019, current owner Brian Kelly decided to put the Holbrooke through one of the few lengthy closures in its history. His intent was to modernize the guts of the building while peeling back the layers of time to find its original bones. This year, as the COVID-19 pandemic kept most surrounding businesses closed, construction crews worked nonstop on the Holbrooke. They installed new plumbing and electrical, while removing a number of plaster walls and non-historic doorways added over the decades. When they finished, the Holbrooke once again had a grand lobby and dining room that greeted visitors in its heyday. Part of its ambiance comes from the century-old brick-and-rock walls that were uncovered during construction.

The restoration also adorned the Holbrooke’s upper bar with marble tabletops similar to those in the early days and carefully retouched its original decorative barback from the 1860s.

“It was about restoring the Holbrooke to what it should have been,” said Michael Barber, one of the hotel’s managers. “There was a lot of uncovering of really cool, old details of the building. So we were discovering what this beautiful old place had underneath.”

And the secrets underneath the building have a few surprises. The watering hole in its basement, known as the Iron Door Bar, leads to a hidden tunnel that burrows directly under the city’s Main Street.

“It used to connect to the gold exchange,” said Barber. “Folks who had come off the mountains with their sack of gold could stay here, have a drink, put their stuff in a safe, and then their gold could be transferred underground to the bank.”

But it won’t just be the upper bar’s style or the lower bar’s secrets that draw in visitors: The 27 well-appointed guest rooms are now augmented by a new restaurant headed by Chef Zack Ahrenholtz, who previously cooked at an array of well-known dining houses in Napa County. Ahrenholtz’s menu pays tribute to Grass Valley’s pioneer days by focusing on smoked meat and barbecue, while also taking foodies further back into California’s culinary legacy, presenting a number of dishes with Spanish and Mexican flair.

As COVID-19 restrictions begin to ease, the Holbrooke will start hosting live music and comedy in the Iron Door Bar. For the moment, its team anticipates mostly welcoming day trippers and “stay-cationers” from around Northern California. The long-term goal, however, is to become both a major overnight attraction for tourists and a lively cultural destination for the Capital region.

“The building’s nooks and crannies that are just filled with stories from our history,” said Sherry Villanueva, a member of the Holbrooke’s management team. “With the restoration complete, that history is really coming now.”

1 Comment on "With the Holbrooke Hotel’s restoration, a piece of California history gets second life"