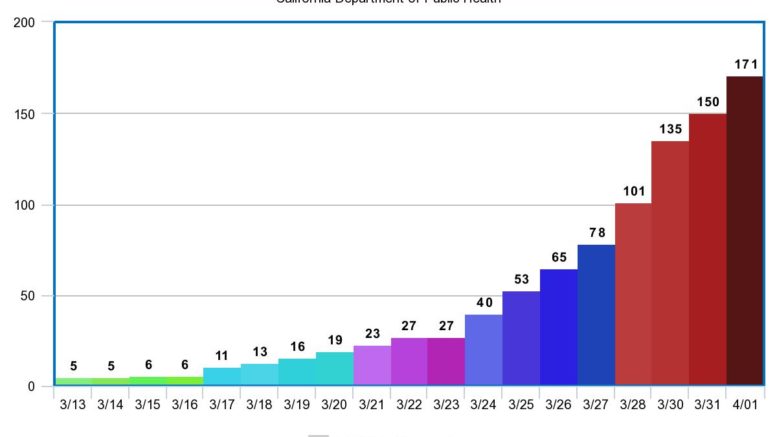 Deaths related to COVID-19 surged by 97% in just 19 days in California.

This is what the coronavirus outbreak looks like in California

Patients One and Two were detected in Los Angeles and Orange counties on Jan. 26. Patients Three and Four were found in Santa Clara County a week later, and were soon joined by Patients Five and Six in San Benito County.

Patient Seven was a Sacramento County resident who had recently returned from China, where the novel coronavirus originated. Patient Eight, a Solano County woman admitted to the UC Davis Medical Center in Sacramento on Feb. 26, was the first person in California to contract COVID-19 through community transmission.

Back then, state health officials were still projecting measured calm. The risk to the general public was still low, they said. Besides, California had prepared for this kind of thing a decade ago, when the H1N1 strain of the 1919 swine flu was circulating.

A month later, the devastating respiratory illness has swept the globe, leveled the economy and put a halt to modern life.

By April 1, California had 171 COVID-19 deaths, a figure that Gov. Gavin Newsom acknowledged had already changed by the time he stated it during his daily press briefing—a new tradition where he chronicles the disease’s fast trajectory and refreshes his plea for California’s nearly 40 million residents to buy officials a little more time by staying home.

“We have to remind people of the power and potency of their individual decision making,” Newsom said. “It’s really a civic moment.”

One objective of Wednesday’s press conference was to caution an antsy public—less than two weeks into a statewide stay-at-home order that will likely extend into May—that cloth face coverings, while potentially mitigating, were no replacement for physical distancing, frequent hand washing and avoiding touching one’s face.

“The most important thing is physical distance,” said Dr. Sonia Y. Angell, the state’s top health officer. “We don’t want people to have a false sense of security with these face coverings.”

Newsom said the state has distributed 35.4 million N95 respirator surgical masks and had received two-and-a-half “tranches” of supplies from the federal government, not including ventilators. The state put in a request for 10,000 ventilators from the federal government, but Newsom said that likely represented the country’s entire stock and that he wasn’t “naïve” enough to think it would all come to California.

The state has set a goal of 30,000 additional ventilators and ICU beds through May, said state Health and Human Services Secretary Mark Ghaly, who stressed that an ICU bed without a ventilator doesn’t do much good.

Ventilators and hospital beds remain the two critical resources that California and every other state needs for the expected surge of the critically ill. As of April 1, California had 774 coronavirus patients in the ICU, a one-day increase of 17%.

Overall, nearly 23% of the 8,155 people who have tested positive for coronavirus in California were hospitalized.

It took just six days for the state’s death toll to more than double. Nine of the 171 deaths occurred in Sacramento County, where COVID-19 has sickened at least 314 people—approximately one-third of whom are thought to have contracted the disease through church gatherings.

“Social distancing works,” Dr. Peter Beilenson, director of the county’s Department of Health Services, said in a statement. “We must keep our distance from others and not gather with any non-household members. Period. If we do not slow the spread of cases, a surge of sick people could have the potential to overwhelm our hospitals, doctors and equipment resources and could result in additional deaths.”

On the supply side, Newsom sidestepped a question about whether California had its own version of the Defense Production Act, which allows the federal government to require industries to produce needed supplies in an emergency, saying only that he currently was receiving enough voluntary support from the state’s private sector.

“We have a few thousand [ventilators] we’re procuring from around the globe,” Newsom said.

“We are in a completely different place than New York, and I hope that we continue to be,” Newsom said. “Time is our friend. That curve is our enemy. Let’s bend it.”

Little light at the end of the tunnel