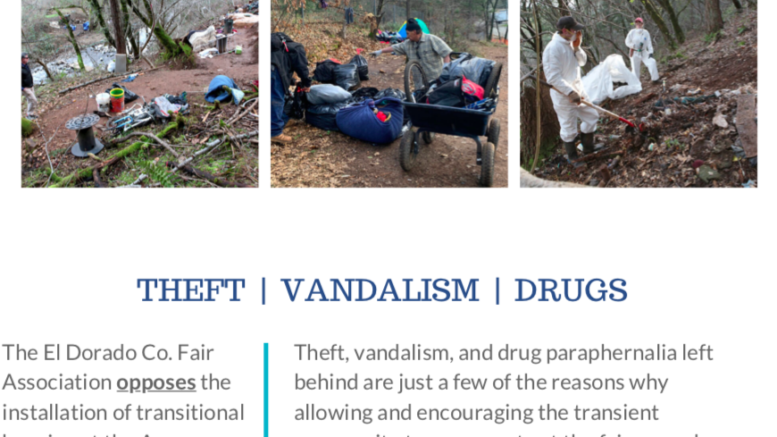 Organizers of the El Dorado County Fair are pressing ahead with preparations for June’s celebration of everything that’s wholesome about small-town life—while also orchestrating a campaign against unsheltered residents, whom they say will spread crime and disease if the county opens its first-ever homeless shelter in a nearby armory.

Elected officials discussed the need for a temporary shelter and resource hub for the county’s growing homeless population on Tuesday, but backpedaled from the idea of putting it at the Placerville Armory after blowback from the El Dorado County Fair Association.

In a meeting webcast on Zoom, El Dorado County Board of Supervisors Chairman Brian Veerkamp said the board and the Placerville City Council may have jumped the gun by name-checking the armory in a joint policy statement recognizing the severity of the homelessness crisis and pledging to work together to address it. An overnight survey conducted in January 2019 found 613 homeless people scattered across 1,786 rugged square miles of a county that climbs into South Lake Tahoe.

The armory sits about two blocks south of the fairgrounds, which is set to host four days of carnival rides, livestock competitions and wheelbarrow racing less than two months from now, despite Gov. Gavin Newsom warning Tuesday that the ongoing coronavirus pandemic will likely forestall large public gatherings until the fall at the earliest.

Newsom announced this week that he and the governors of Oregon and Washington state are collaborating on a framework for gradually reopening their West Coast states, which have collectively logged roughly 35,000 confirmed cases of COVID-19 and more than 1,300 deaths from the respiratory illness thus far. The six parameters Newsom outlined at his April 14 press conference won’t mean a return to regular life anytime soon, but would provide local jurisdictions with greater authority to ease physical distancing requirements.

There were 34 confirmed COVID-19 cases in El Dorado County on April 13, only five of those in the greater Placerville area. Fourteen cases were traced to El Dorado Hills.

The Fair Association claimed the public health crisis would likely be over in time for the fair to go on, and that it had no bearing on whether “transient housing” should be made available nearby.

“This has nothing to do with COVID-19, this is something that they want to be permanent,” El Dorado County Fair spokeswoman Suzanne Wright wrote in her April 9 email blast.

Health officials aren’t so sure.

Preparing for a surge

The county has long needed a permanent homeless shelter and may soon require a facility that can accommodate an unexpected surge in COVID-19 patients, similar to what Sacramento is doing with its shuttered Sleep Train Arena, says Martin Entwistle, vice president of population health at Marshall Medical Center in Placerville.

Entwistle is also leading one of the county’s special workgroups dedicated to the COVID-19 crisis, this one focused on the homeless population.

“Our main strategy is to keep people in camps along the highways and byways,” Entwistle told SN&R.

But for a significant number of homeless residents who are at risk of falling ill to COVID-19, the team’s options are limited by the lack of a shelter to house older and sicker homeless residents. And a state plan to repurpose empty motels and hotels for unsheltered residents has been hung up locally by liability questions.

“There’s some good intent … but some of the strings haven’t been untied,” Entwistle explained.

The fair association mounted its aggressive opposition campaign last week, urging its supporters to protest sheltering “transient” individuals across the street from a children’s shelter and a few blocks away from a skate park.

The association’s opposition flier also portrayed the county’s homeless residents as drug-addled criminals who spread diseases such as AIDS and “MERSA,” by which it probably meant MRSA, a bacterial staph infection.

“The Fairgrounds ALREADY has fallen victim to the transient community, we frequently find drug paraphernalia (including used needles) in our restrooms and bushes, feces and waste on the grounds, and mentally unstable transients have harassed Fair staff and guests,” the flier states.

Several county residents copied and pasted the association’s template protest letter and emailed it to the Board of Supervisors under their names.

Proponents, however, say there are all sorts of unsheltered people and that opening a shelter where they can access bathrooms, public assistance and resources for employment, health and housing would actually help address the fair association’s concerns.

“Not everyone is on drugs,” one of the members of a network of Western Slope churches that provide shelter during the winter told supervisors. “Some have just fallen on bad circumstances.”

Your homeless friends and neighbors

According to a January 2019 survey of homeless residents, more than a quarter were victims of domestic violence and 60% were either looking for work or working part-time.

Matt Huckabay, executive director of The Center for Violence-Free Relationships in Placerville, says there’s a definite connection between domestic violence and homelessness.

The center’s 18-bed shelter was at capacity on Friday. Huckabay says the county has long needed a location where unhoused people can go and address the root causes of their homelessness.

“This gives us the first—a really huge step forward,” Huckabay told SN&R. “I think that it is necessary.”

Having a county-run shelter won’t solve the lack of affordable housing options, nor would it be the right setting for every unsheltered individual, but it could help stretch the financial aid the county receives to address homelessness. The shelter would also be a one-stop shop for housing, employment and health resources, as well as public assistance. According to the survey, 78% of surveyed homeless residents weren’t signed up for disability benefits.

“It makes access easier,” Huckabay said. “The expectation really is that homeless folks” must figure out how to travel from their camps to various government offices without transportation “without people understanding what a big ask that is.”

During the public comment portion of Tuesday’s supervisors meeting, opinion was evenly divided between health officials and church representatives who saw homelessness as a condition and the county’s more conservative members who saw it as an identity.

“We all care for the homeless, but the people that need to be focused on first are the business owners and the people that contribute to society,” a representative of the El Dorado County Republican Party told supervisors.

The county and city were already planning to explore other properties that could provide temporary housing and services to the homeless, a process they must embark on to secure state funding and to defend their anti-camping ordinances in court.

Entwistle doesn’t have an opinion on where a shelter should go or whether the armory is an appropriate location. But he isn’t downplaying the sense of urgency, particularly due to the current pandemic.

“Time is of the essence,” he said.

If COVID-19 breaks out among El Dorado County’s homeless population, two things could happen, he explained: It will tax medical resources, imperiling health providers’ ability to treat everyone who needs care; and the outbreak will eventually reach the broader community.

“Usually [we] think of homelessness as a housing or economic issue,” Entwistle said. “The issue we’re facing right now is a health issue.”