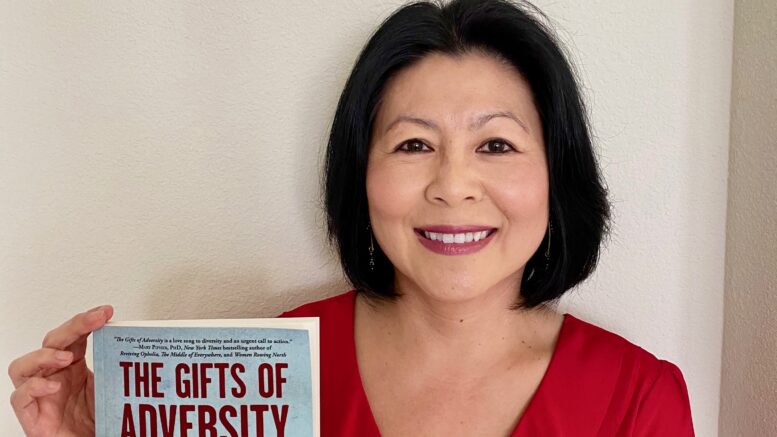 Carolee Tran, who teaches psychology at UC Davis and has a private practice in Midtown Sacramento, holds her new memoir, “The Gifts of Adversity.” (Photo courtesy of Carolee Tran)

Several years ago, a psychologist at UC Davis began sharing her childhood refugee story, offering insights on how past traumas haunt the present—and putting a face on a generation who became Californians in the wake of the Vietnam War.

Now, Carolee Tran is venturing further down that path with a raw and revealing memoir called “The Gifts of Adversity.”

She says making the leap from academic writing to the naked pages of self-discovery was liberating. It was also the biggest professional risk the Harvard-trained psychologist has ever taken. There’s a conventional wisdom that therapists should not tell their own stories. Tran is not intimidated by the push-back, nor is she hiding from her conviction that the story might help other people.

“It’s like a movie that’s forever playing in my mind,” Tran says of racing terrified through the falling city of Saigon when she was eight. “I feel like this book has been living inside me for 45 years.”

Long-buried memories of the bloody destruction in Southeast Asia between 1963 and 1975 were re-awakened for many in Sacramento in 2017 with the release of Ken Burns’ ten-part PBS documentary The Vietnam War.  It wasn’t just local veterans who found themselves revisiting the battle in their thoughts and on their television screens. The region is home to thousands of families who immigrated from Vietnam, Laos and Cambodia to escape genocidal retribution.

KVIE held a large premiere for The Vietnam War, followed by a panel discussion that included Tran. In her first foray into the public eye, she told the audience about the resonating effects of trauma, as well as the ways people can begin to overcome it.

Tran spoke from both professional and personal experience. Her father was a major in the South Vietnamese army during the war. When U.S. forces withdrew, allies on the ground—men like Tran’s father—faced imprisonment or death as North Vietnamese troops stormed the country.

Later, by discovering her own path into the American dream, Tran become a therapist who specializes in treating veterans and war refugees. After taking part in the KVIE premiere, Tran further opened up about her story in interviews with SN&R and CapRadio. She has started accepting speaking invitations at colleges around Sacramento.

While Tran has a knack for captivating her audiences, she’s never shared as much of herself as she has with “The Gifts of Adversity,” released last month by Bodhichitta Press and available at online retailers.

“It’s just not kosher in our field to bare your soul like that. But I did some searching inside and decided this is the path I wanted to take.”

Written in a clear, flowing style, she recalls harrowing experiences during the fall of Saigon, her emotional upheaval coming to the U.S. and her trauma of childhood sexual abuse in the Catholic Church. The book’s most vivid passages involve grappling with violent memories, enduring downward mobility and cultural insensitivity and learning how victims eventually find their voice.

Not all of Tran’s colleagues were thrilled about what she had written.

“There were professional psychologists who discouraged me from doing it,” she said. “It’s just not kosher in our field to bare your soul like that. But I did some searching inside and decided this is the path I wanted to take.”

She still needed the right words. She had already been published in prestigious medical journals, yet sharing her own background rather than her work with refugees would be different. Tran knew she needed advice on connecting with mainstream readers so she turned to Alan Rinzler, formerly a top editor at Simon & Schuster.

Rinzler, now a consulting editor, has helped polish the work of literary luminaries that include Tom Robbins and Toni Morrison, as well as best-selling authors such as Clive Cussler. Rinzler was also Hunter S. Thompson’s editor for the last 13 years of the icon’s life.

Rinzler had just traveled through northern Vietnam before Tran approached him about editing her project.

“When I heard what it was about, I was really interested,” he told SN&R. “Her story is so compelling and historically meaningful, because part of her family was pro-communist in the north, and part of it was South Vietnamese middle-class on the other side of the conflict. And then her memories of coming to the U.S.—it’s just an incredible story.”

Rinzler worked with Tran as she resurrected her past, including the abuse she suffered at the hands of a trusted priest, and how that later impacted her marriage to fellow psychologist Ladson Hinton. The couple have two daughters, Carina and Mika, and live in Davis.

“Certain chapters and certain elements of the book, I think, were very difficult for her to write about,” Rinzler said. “In a way she was reliving what had happened. She worked really hard on this book, so I was honored to be part of it … It’s a good really read.”

Tran said that the experience of writing her memoir was invigorating. “I’ve been immersing myself in a whole new field,” she said. “It’s like being an intern again as I learn about this world of writing.”

Tran has already heard from history teachers who plan on incorporating it into class reading on the Vietnam War, and also from women’s studies and psychology professors. While Tran finds that exciting, she also hopes readers outside academia will discover the book and embrace its message.

“I hope it will encourage those who have had an experience to reach out for help and support,” Tran said. “It want it to be a message of encouragement. I want people to know that we can heal from our traumas and that our lives can be full.”

Dad would have been 100 this week

Be the first to comment on "Taming the inner storm"