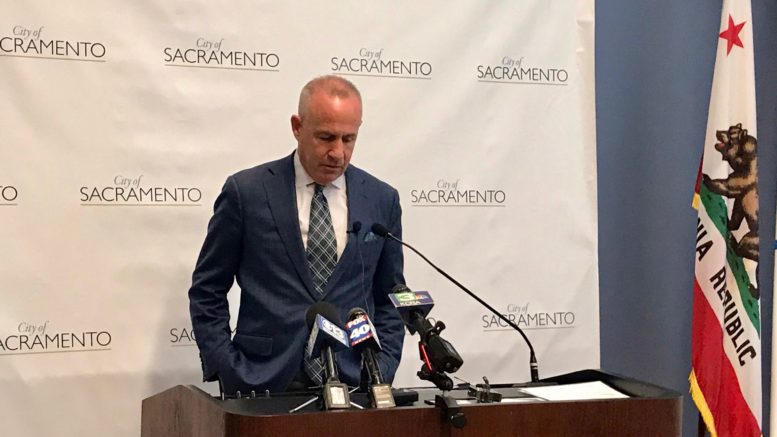 Sacramento Mayor Darrel Steinberg talks to reporters about "a sobering" new report on homelessness in the city. Photo by Scott Thomas Anderson.

Sacramento Mayor Darrel Steinberg wasted no time calling a gaggle of reporters together to defend his administration’s handling of homelessness in the face of a new report showing the number of people on the streets rose by 19% over the last two years.

Since taking office, the mayor has presided over a host of new programs and spending initiatives aimed at getting the homeless into shelters or housing. Yet on Wednesday, June 26, when the new Point-In-Time count for countywide homelessness was released, Steinberg acknowledged some progress that’s been made has been greatly hampered by Sacramento’s broader affordable housing crisis.

The count was conducted at the end of January and involved an army of volunteers spreading out across the county with surveys drafted by researchers at Sacramento State University and Sacramento Steps Forward, the region’s coordinating agency for homeless services. The result of those efforts offered a snapshot of 5,570 people found living on the streets on the two nights of the count.

During his press conference, Steinberg stressed there was an important figure in the new report that needed unpacking, specifically that the number of chronically homeless people who were without shelter was down by 7%. The mayor said this key figure was proof that the city’s recent direction in tackling long-term homelessness was starting to work.

“We have a housing crisis in Sacramento,” Steinberg said. “Why are more people becoming homeless while chronic homelessness is down? It’s the affordability crisis.”

He also emphasized another figure in the report–that 93% of the homeless counted were originally from Sacramento. He said that’s proof the city’s new policies and efforts are not, as some critics have suggested, acting as a magnet to draw more homeless people to Sacramento.

Finally, Steinberg said he expects the new homeless shelter downtown at the Capital Park Hotel to be providing 180 beds by August. Efforts to turn a CalTrans underpass near Land Park into a shelter, as well as some property near Cal Expo, are going considerably slower, the mayor acknowledged.

“I’m attempting to run through these walls as fast as possible,” he said.

Sacramento State University professor Arturo Baiocchi, who oversaw the count, said it was important to remember the 2019 canvassing was more sophisticated and cast a wider net than previous years.

“I do think it’s one of the more accurate counts,” Baiocchi said at the press conference. “We were covering three times the areas.” The previous canvasses could have significant undercounts because of their methodology, he said.

“This gives us a good baseline moving forward,” Bates said.

The mayor agreed, urging the media not to abbreviate the opening line of his remarks.

“I find the numbers sobering, but I’m hopeful,” he emphasized. “This is the single issue that challenges our place as a great city.”