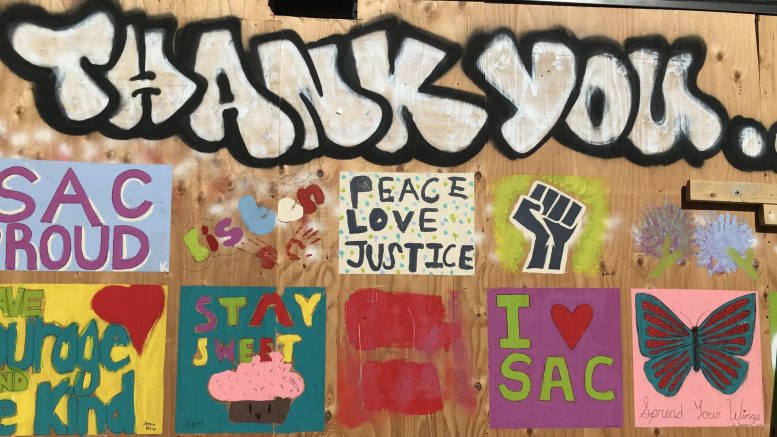 Some Sacramento businesses were slammed by the coronavirus shutdown and then by damage during the George Floyd protests. While some are still boarded up, they offer messages of hope. (Photo by Foon Rhee)

Editor’s note: How should Sacramento spend $89 million from Uncle Sam? Residents have ideas, but will officials listen?

Mayor Darrell Steinberg and City Council members have ideas on how to spend nearly $90 million in federal stimulus money.

But they also want to know what their constituents need to survive the COVID-19 pandemic, so they commissioned surveys of businesses and residents.

One resident said, “Jobs, food, rental assistance, and shelters,” while another said, “Getting people safely back to work.”

In the survey of businesses—93% of them small firms, nearly half owned by women and one-third by non-whites—57% said that funding for payroll and other operating expenses is extremely or very important, 47% said the same about money to buy PPE and make other COVID-related changes and 42% said help with leases or mortgages.

“Rent reduction—not have to pay full rent, but to pay partial rent,” one respondent said. “Everybody needs financial support to start again,” said another.

The surveys, conducted by FM3 Research in Oakland, also confirm the widespread and dramatic impact of the coronavirus and the stay-at-home order to slow its spread.

Among 433 residents interviewed June 2-4, 59% said their lives had been disrupted “a great deal” or “a lot,” and 18% said they or someone in their household had experienced COVID-like symptoms.

Half of residents surveyed said their income has been reduced, and nearly one third either lost their jobs or had their hours cut. Latinos, those younger than 30 and respondents earning less than $50,000 a year were the most financially impacted. Many said they are concerned about getting sick, as well as their mental and emotional health, and are extremely concerned about how much longer the pandemic will last.

“The spread of COVID-19 is not over by any means,” one respondent said. “Some people think we are back to normal, when in fact we are all still at risk.”

Another said they were concerned about “not being able to do things like I once was. I am uncomfortable with social distancing.”

As for 399 business owners surveyed June 2-10, one-fourth said they had to shut down, four in five reported a loss of sales, half say they face a severe cash shortage and one-third say they expect to lay off some employees in the next six months.

“We just need confidence that we are not going to be shut back down,” one respondent said. “Right now between riots and COVID-19, it is making running a small business very hard!”

Another owner said, “My biggest concern right now is a second wave of the pandemic,” while another worried about “economic impacts for years to come.”

That leaves about $56 million yet to be divided. Various advocacy groups, a citizens advisory committee and others are making their appeals.

“Sacramento can be a model for how to recover in a way that sets us up for a healthier, more equitable and resilient economy.”

For instance, incoming City Councilwoman Katie Valenzuela isn’t waiting to take office in December to use her political influence.

Besides urging the city to redirect $10 million away from the police department in response to the George Floyd protests, she did her own survey on the federal money. Based on 269 responses in May, she and advocacy groups including the Sacramento Central Labor Council and Sacramento Housing Alliance put together a list of recommendations.

They include money for housing, such as direct rent and mortgage assistance, funding to nonprofits to build affordable housing and support for “safe ground” homeless camps.

The recommendations also include economic relief: investing in local businesses or nonprofits that will create jobs during the pandemic, such as food delivery and a conservation corps to plant trees; vouchers for low-income or unemployed residents to spend at local businesses; and personal protective equipment and social distancing adaptations for workers.

“Sacramento can be a model for how to recover in a way that sets us up for a healthier, more equitable and resilient economy. That means prioritizing direct support for residents first so we have a stable workforce and consumers who are able to support our economic recovery,” Valenzuela said in releasing her survey results.

One respondent urged the city to “think support, not stimulus” by “keeping people house, alive, safe,” while another said, “We have a unique opportunity to re-imagine our city and how care for each other.”

The mayor and council members asked for the input of residents and business owners. Now that they know what people actually think, there’s no excuse not to listen.

Where will hungry students eat?

Be the first to comment on "Dividing the pie"