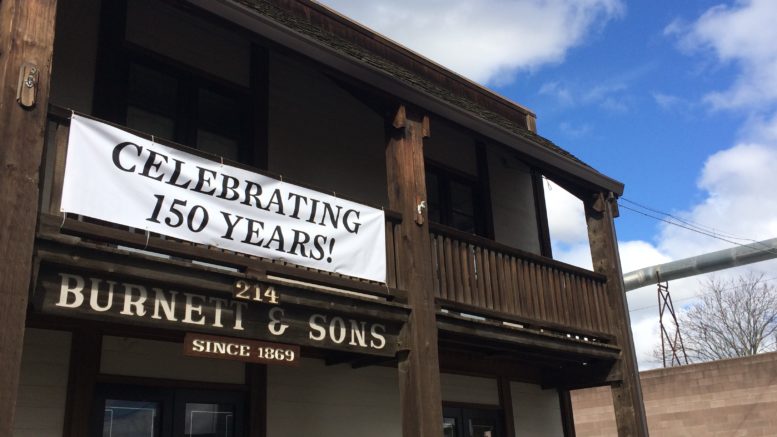 Burnett & Sons, one of Sacramento’s oldest businesses, is celebrating its 150th anniversary this year. (Photo by Foon Rhee)

When a longtime local business closes its doors, there’s a lot of attention and some sadness. It happened again in June when Dimple Records announced it was shutting down after nearly 45 years.

But what about those that have survived big-box stores and Amazon, not to mention the occasional recession? How have they stayed open so long?

I asked the Sacramento Metro Chamber for a list of its oldest members and contacted four small businesses: Burnett & Sons, which specializes in architectural millwork and started in 1869; Grebitus & Sons Jewelers, founded in 1926; Hefner, Stark & Marois, a law firm founded in 1896; and McGee & Thielen insurance brokers, started in 1920.

Asked for secrets to their survival, there are some common themes: keeping loyal clients, building trust and providing stellar customer service. Plus, they offer services that can’t be easily outsourced to China or Texas.

Hefner, Stark & Marois, Sacramento’s oldest law firm, now has about 25 attorneys and staff. Partner Tim Cronan says that besides being responsive to clients and providing good counsel, the firm takes pride in its charitable contributions and civic involvement.

“We’ve made a strong investment in giving back to the community,” he told me. “That’s helped us.”

It also helps that the firm can ride out the business cycle because its real estate caseload picks up with economic growth, and its bankruptcy work increases during harder times.

Jim Wood, vice president at McGee & Thielen, credits his firm’s longevity to responsiveness to clients. “There’s nothing magical at all,” he says.

That’s particularly important for an insurance broker, which collects premiums in advance and then has to help clients when they file claims. About two-thirds of the firm’s clients are small to medium-sized businesses, including Sacramento Natural Foods Co-Op, and the other third are individuals.

Wood, who has been with the firm since 1983, said it had to tighten its belt during the Great Recession, when it was also embroiled in a shareholder lawsuit. Now, he said, the 17-employee firm is on solid ground.

Jim Burnett, the sixth generation in charge at Burnett & Sons, says he’s proud of his company’s long history, which he says helps attract new business. It has done work at the state Capitol, City Hall and the Cathedral of the Blessed Sacrament, he says.

At the same time, “you’ve got to change with the times,” which for Burnett meant learning to use computers for accounting. The firm now has nearly 30 employees as it celebrates its 150th anniversary this year.

Edwin Grebitus Sr., the founder of Grebitus & Sons, was a founding member of the American Gem Society. On its website, it promotes its reputation for fine jewelry and watch appraisal and repair.

The staying power of these homegrown companies is even more impressive given how many small businesses fail in their first few years and the who’s who of national brand names disappearing in the retail apocalypse.

Be the first to comment on "Editor’s note: How to stay in business"