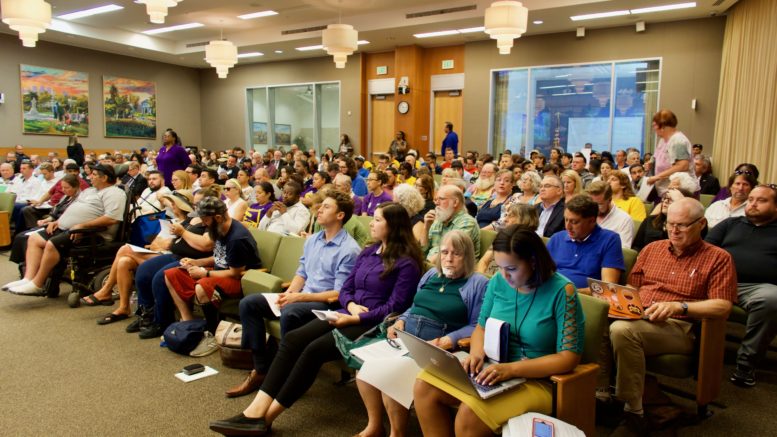 Has political orthodoxy and the threat of big money broken up Sacramento’s grassroots renters’ alliance?

On a February evening, two women sat next to each in front of a crowd, passing a microphone as they took turns answering questions about an upcoming fight for rent control in the capital city.

One was Jovana Fajardo, Sacramento director for the Alliance of Californians for Community Empowerment, or ACCE. The other was Michelle Pariset, a Democratic organizer who had been the face of Housing4Sacramento. Both women were key figures in a grassroots coalition of community and labor groups determined to outflank a Sacramento City Council that was taking very little action on soaring rents, serial evictions and widespread displacement throughout neighborhoods.

Over the course of four months, their coalition gathered 44,000 signatures to qualify a City Charter amendment for the 2020 ballot, one that would bring strict rent stabilization and tenant protections to the city, along with a publicly elected board to oversee them.

In late June, representatives from City Hall approached the coalition to negotiate an alternative to the ballot measure. What they put on the table were rent caps and tenant protections that elected officials could enact with certainty—and almost immediately.

In exchange, according to multiple sources familiar with the discussions, the coalition was supposed to pull the ballot initiative.

On Aug. 13, the City Council considered the fruits of those negotiations. The Tenant Protection and Relief Act was presented as a grand compromise between City Hall and the influential Housing4Sacramento coalition. But this wasn’t the same Housing4Sac.

In the packed council chamber, Fajardo and Pariset didn’t sit next to one another. The distance between them signaled a much larger fracture within the coalition.

“We had a vision of keeping families in their homes and fighting the housing crisis in Sacramento,” Fajardo later told SN&R. “Some of our partners decided that their fight for that had stopped.”

ACCE, SEIU Local 1021, the Sacramento chapter of the Democratic Socialists of America and the statewide group Tenants Together are no longer part of Housing4Sac.

Yet anyone scanning Houisng4Sac’s website during last week’s meeting might have been confused. The coalition’s homepage still featured photographs of organizer Fernando Nadal and DSA co-chair Jonah Paul. But both men attended the meeting to oppose what the coalition endorsed.

“We fundamentally disagree with this weak compromise between our former coalition and the council,” Paul said from the podium. “This is a pittance that won’t help the thousands of rent-burdened, working-class Sacramento renters that need strong and permanent protections. It’s a veneer of activity to paper over the crisis and to rob renters of their political voice.”

Now, with the fate of the ballot measure in a legal and political gray zone, a new alliance is being formed to keep it alive.

The rupture within Housing4Sac played out quietly over the summer. The differences between the city-negotiated Tenant Protection and Relief Act and the Sacramento Community Stabilization and Fair Rent Charter Amendment point to the causes.

The city’s measure limits annual rent hikes to between 7% and 9%, depending on the consumer price index. It also caps rent increases at 10% regardless of inflation. The act also gives renters with more than 12 months of continuous tenancy protections from no-cause evictions. These protections will sunset after five years.

The ballot initiative, by contrast, would permanently cap annual rent increases directly at the CPI, between 2% and 5%. It would also ban no-cause evictions for all renters and establish an elected rental control board.

What do those differences mean in reality?

Some of the most controversial evictions SN&R covered in the last three years involved individuals being hit with 20% to 30% rent hikes or no-cause evictions after years of solid tenancy, typically so landlords could bring in wealthier renters. Had the new city ordinance been in effect, it would have prevented those displacements (unless the rental properties involved were built after Feb. 1, 1995, or were single-family homes or condos, which are regulated differently by state law).

The Sacramento Housing Alliance, a supporter of the compromise, estimates that the Tenant Protection and Relief Act will apply to just under 70% of the city’s rental units.

On the other hand, the latest report from the California Housing Partnership determined that city renters need to earn $27.97 an hour to afford the median rent. It also found 80% of extremely low-income households in Sacramento County are spending more than half their incomes on rent.

Former members of the coalition say that’s clear evidence that thousands of housing-insecure families simply can’t sustain another 7% to 9% rent hike without being priced out. Given that developers and real estate groups are among the largest financial donors to incumbent City Council campaigns, they also saw too many conflicts of interests in leaving tenant-landlord mediations up to City Hall as opposed to an elected rent board.

One thing both former and current Housing4Sac members generally agree on is that there were risks associated with not taking the city’s deal. The California Apartment Association reportedly spent nearly $500,000 just in fighting rent control initiatives in the cities of Richmond and Mountain View. It and allied groups spent $76 million to defeat a November 2018 statewide ballot measure that would have allowed more local rental restrictions.

Last week, Pariset told SN&R that she believed that even if Housing4Sac could raise $3 million to support its ballot initiative, it would still be outspent 3-to-1 by opponents. Other members of the coalition shared that concern.

Though Mayor Darrell Steinberg and Councilman Steve Hansen couldn’t bring the California Apartment Association on board, they did get the backing of the Sacramento Association of Realtors and the Sacramento-Sierra’s Building & Construction Trades Council. They also persuaded the North State Building Industry Association to stay neutral. That means the apartment association might be on an island if it opposes the council’s measure.

While the threat of big money loomed, members of the coalition who didn’t want to take the city’s offer also knew that a Sacramento Housing Alliance survey had just found that 65% of likely voters would support rent control. In other words, the ballot initiative had a fighting chance. To that point, despite all of the money spent by the California Apartment Association, tenants won their battles for rent control in Richmond and Mountain View.

Finally, another factor to be considered was that the mayor and at least five council members agree with the apartment association’s claim that rent control generally hurts investment in building new housing, even though several independent studies, including a detailed February analysis by SHA, have suggested that is not true.

If the ballot initiative were passed by voters, it was unclear whether the council would pay to defend it in court.

These were the questions that split the coalition.

Veronica Beaty, SHA’s policy director, talked about the toll that constant unchecked rent hikes and evictions had taken on her community, arguing the city’s compromise could prevent some of it.

“My rent has increased nearly 40% over the time I’ve lived in Sacramento. In that time, my apartment has reduced services, been unresponsive to maintenance requests and evicted several of my neighbors for minor lease violations they had no opportunity to cure,” Beaty told council members. “Every time I come home, I look at my front door to see if there is a piece of paper taped there, telling me I’m next.”

Robyn Mutchler, an elementary school teacher who’d just been laid off from Martin Luther King Jr. K-8 School, spoke about why she canvassed for signatures with Housing4Sacramento to qualify the ballot initiative, a level of protection that—unlike the compromise—could actually help her.

“I recently got a 6% rent increase, and that’s $80 more a month I can’t afford,” Mutchler said. Looking at Hansen and then Carr, she added, “I’ve met you personally and I think you’re both great men, but I can’t say this enough, this is not going to work for me. I’m literally a month away form when my son and I—I don’t know where we’re going to live.”

After the council’s vote, the mayor made it clear he considered the ballot initiative dead, referencing a law passed last year. Senate Bill 1153, based on an earlier statewide bill that Steinberg himself authored, allows local backers to pull their ballot initiatives as late as 88 days before an election.

While Housing4Sac’s Margarita Maldonado told reporters that her coalition will no longer pursue the ballot initiative, the very next day, other members of the coalition asserted that the measure cannot legally be pulled from the ballot because it’s not a regular measure—it’s a city charter amendment. That’s in a different section of the election code that SB1153 doesn’t have specific language about.

Both current and former members of the coalition—and city officials—are also watching a proposed bill, SB 681, which if passed with an “urgency clause,” might provide a clear pathway for Housing4Sacramento to kill its ballot measure altogether. However, as long as it’s alive, a new alliance is being formed to keep pushing for it. It will be called Sacramento for Real Rent Control.

Meanwhile, Pariset responded to the heat she’s been taking for leading Housing4Sac to the compromise measure in a Facebook post. “They’re mad because we didn’t get exactly what we wanted right now,” she wrote Aug. 15. “And I’m the easiest target.”

For her part, Fajardo was looking ahead.

“We’re forming a new coalition,” Fajardo confirmed. “There are several new organizations that are interested in joining and helping us continue the fight.”