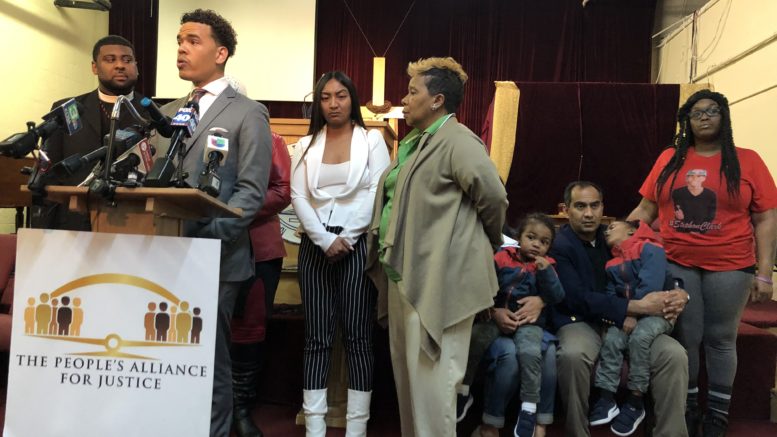 Rev. Shane Harris stands with Stephon Clark’s fiancée (right) on March 2, after the District Attorney’s Office announced there would be no criminal charges against the officers who killed Clark. (Photo by Raheem F. Hosseini)

Who should investigate peace officers who take a life? California isn’t the only state to grapple with this question.

As a stricter use-of-force standard navigates the state Capitol, one question remains unanswered: Who should investigate cops when they take a life?

“I just don’t see anyone being on our side,” said Mann, whose brother Joseph Mann died in a hail of gunfire on a North Sacramento sidewalk on July 11, 2016. “We’re in year three and nothing’s happened to them. They’re probably out living their lives like nothing’s wrong.”

Assembly Bill 392, the California Act to Save Lives, states that peace officers would only be justified in using deadly force if they reasonably believed it was necessary to defend themselves or others from imminent danger. However, the bill, which the state Assembly approved last month and the Senate is now considering, wouldn’t change who’s responsible for deciding what’s a crime—elected district attorneys.

“It’s a good start,” Rev. Shane Harris, founder and national president of the People’s Alliance for Justice, said of AB 392 during a March 2 press conference, after learning Sacramento County District Attorney Anne Marie Schubert declined to charge the two city officers who fatally shot Stephon Clark a year earlier. “It still does not deal with the independent investigation aspect.”

Thus far, California cities and state legislatures across America haven’t found a foolproof method that does.

First, let’s define terms: What the Sacramento County DA’s office conducted with regard to the police slayings of Clark and Mann were not technically investigations. That would have required the office to gather evidence independently of the Sacramento Police Department’s investigations, which didn’t happen.

In clearing the officers of any criminal charges, the DA’s office primarily reviewed the police investigations, which focused more on the actions of the men who were killed than the men who killed them.

With regard to the 2018 police killing of Clark, an unarmed black man pursued into his grandparents’ backyard, both Schubert and California Attorney General Xavier Becerra sidestepped questions about whether they requested any additional information from police before clearing the officers. When pressed by reporters, Schubert admitted her office didn’t request cellphone records or toxicology tests of the officers, though she scrutinized that information for Clark.

According to a time line released earlier this year by Sacramento police, Becerra’s office did interview two of Clark’s relatives and received a review of the county autopsy from San Diego County medical examiners, but that was the extent of its investigation.

It’s unclear whether the DA’s office conducted any independent legwork at all.

That may be why some reform advocates still think the state should conduct wholesale investigations of law enforcement killings.

Hours after Schubert told reporters she wouldn’t prosecute the officers who rounded a blind corner and fired 18 rounds at Clark, Rev. Harris stood with Clark’s fiancée and two sons in a tiny church to advocate for what he coined the Stephon Clark Act.

The undrafted bill would serve as a successor to a failed 2015 bill from Assemblyman Kevin McCarty of Sacramento that would have required the attorney general to appoint a special prosecutor to investigate deadly law enforcement encounters, as well as be the “sole authority to determine whether criminal charges should be filed” against cops. During his press conference, Harris called for a simpler set-up—have the attorney general make these decisions.

“This would create transparency in California,” Harris said. “We’re leading the country in police shootings.”

Harris noted that 10 states—including New Jersey, New York and Wisconsin—already conduct some form of outside criminal investigation when local authorities injure or kill civilians. But none of the state systems have changed much on the ground, and Sacramento County’s former inspector general isn’t a fan of the idea.

“First of all, I don’t think we need to take it out of the DA’s hands,” Rick Braziel, the retired Sacramento police chief who came into conflict with the county’s sheriff, told SN&R in a previous interview. “Bigger doesn’t always mean better.”

What Braziel meant is that California is too ungainly for what he sees as a one-size-fits-all investigative process. He said something like that might work in Tennessee, where the state’s Bureau of Investigation probes violent encounters involving local police, as it did recently in Kingston and Bristol. But California, with its broad geography and diverse constituencies, would do better under a Goldilocks option akin to what Placer County has, Braziel argued.

Placer County Lieutenant DA Noah Brommeland is credited with organizing the countywide committee that decided on a task force model to investigate deadly law enforcement encounters, with an officer from each local agency assigned to it.

Eleven law enforcement agencies developed the protocol a decade ago, giving the rural-suburban county’s DA more power—not less—to steer the actual investigation rather than just passively react to it. The agency where the incident occurred retains control of the evidence and interviews, but the DA quarterbacks the show, Braziel said.

“There’s one standard for the entire county and that’s set by the DA,” Braziel said. “They ultimately decide whether it’s legal or not, so why not let them” set the protocol. “It just makes more sense to me, unless you have a county that’s really messing up.”

“In my opinion, there’s huge value in that,” Braziel said. “It does create a little more independence.”

Sacramento County law enforcement officials flirted with a similar idea in 2011, after then-District Attorney Jan Scully ended her office’s reviews of use-of-force cases during budget cuts. But a review panel made up of the sheriff and local police chiefs never materialized, and the county lacked any third party to review deadly force for the next three years, until Schubert restored them in 2014.

As for doubts that cops will thoroughly investigate their own, Braziel said he’s never seen a homicide detective go easy on a case. “It’s what management does with it later that” is the problem, he said.

Braziel was referring to the police shooting of Mann, which resulted in no criminal charges for the two officers, who tried to hit Mann with their patrol car twice before chasing him and opening fire.

Like Mann, Grechario Mack was also black, experiencing a mental health crisis and holding a knife when Los Angeles police shot him in a crowded mall in April 2018. This March, a five-member civilian board of the Los Angeles Police Commission determined that the two officers who continued shooting Mack while he was on the ground violated department policy, opening the officers up to possible termination and criminal prosecution.

“So far, the police chief hasn’t responded to requests that the officers be fired and the district attorney hasn’t filed charges,” Melina Abdullah, who leads the L.A. chapter of Black Lives Matter, said in an email last month.

Braziel mentioned the LAPD when he suggested that union-protected cops from large law enforcement agencies would be more likely to clam up behind a code of silence if the state investigated use of force.

McCarty said that while changing the use-of-force standard is consuming the legislature this year, he still wants to empower the attorney general to “remove the cloud of uncertainty” over such investigations.

“I’m still very interested in the investigation and potential prosecution for some of these cases,” he told SN&R on June 21.

While the ACLU Foundation of California supported McCarty’s bill to give the attorney general simultaneous authority to conduct investigations alongside county prosecutors, it doesn’t have “a global position” on who should investigate police shootings, said Peter Bibring, the foundation’s director of police practices.

Such investigations should be “as independent as possible,” he added. “The devil’s in the details on these types of things.”

Vernadine Mann remained skeptical that any use-of-force investigation driven by law enforcement can be trusted by the public.

“That’s still a wash, because they’re still involved,” she said of the regional task force idea.

Mann said her family has struggled to find peace since her 51-year-old brother died with a knife in his hand and 14 bullets in his body. Two 911 calls reported erratic behavior by a man performing karate moves and appearing to soil himself. One caller described a handgun in Mann’s waistband that was never found.

Responding units trailed Mann as he stalked Del Paso Boulevard, shouting things and once throwing a water container at a police SUV’s windshield. The situation remained unresolved—until Officers John Tennis and Randy Lozoya raced to the scene. The patrolmen twice attempted to hit Mann with their squad car, then jerked to a stop at a cement median and chased Mann beneath the awning of a saloon.

The officers shouted commands and closed the gap. When Mann’s hand with the knife flinched, Tennis and Lozoya unloaded their service weapons.

While the DA’s office cleared both men of criminal wrongdoing, Tennis was fired and Lozoya retired before he could be terminated for violating the department’s use-of-force policies.

The family received a six-figure settlement in civil court, but was prevented from pursuing a more recent civil action.

By contrast, the Clark family is reportedly closing in on a $20 million settlement with the city.

In pondering aloud who she’d like to see investigate violent law enforcement encounters, Vernardine Mann said the person would have to be truly objective, able to conduct complex criminal investigations and not be employed by any law enforcement agency. Additionally, she said victims’ families should have some say in who investigates their loved ones’ deaths.

But the typically sunny Mann, who describes a strong Christian faith in God, isn’t holding out much hope for a civilian investigator “with the family’s interests at heart” any time soon.

“When you’re dealing with earthly people that don’t think like I think, that’s a challenge,” she said. “We were taught wrong is wrong and right is right. But it looks like in our society, wrong is right and right is wrong.”

2 Comments on "The thick blue line"