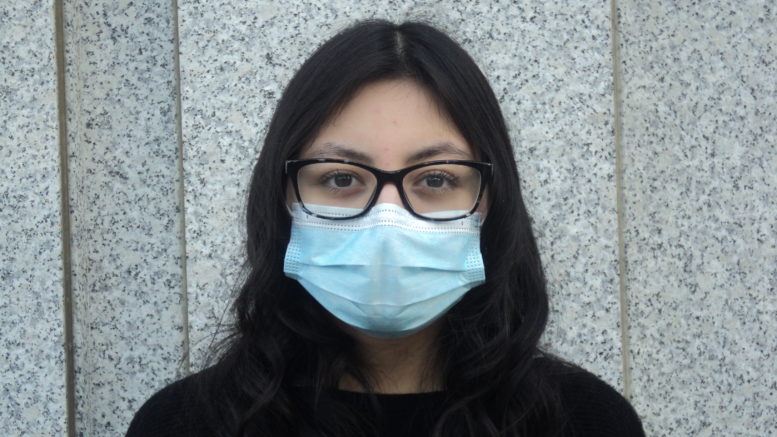 Voting is the most precious right in a democracy, Angelica Vera-Franco believes. She voted for the first time two months ago, in the Presidential Election. In the photo, she holds a book that includes one of her poems. The tome was published by 916 Ink. Photo by Edgar Sanchez by Edgar Sanchez

Angelica Vera-Franco will be in South Sacramento Jan. 20th, watching live history on TV: the inauguration of Joe Biden, the 46th president of the United States.

The first-time voter will celebrate, knowing her ballot was among 81 million-plus for President-elect Biden and his running mate, Vice President-elect Kamala Harris, cast on Nov. 3.

“When I turned 18 that’s one of the first things I was looking forward to, voting,” Vera-Franco said recently. “I’m glad my vote counted for something good.”

The Sacramento State freshman turned 18—the required voting age—just in time for the presidential contest.

She supported Biden/Harris, she said, because it was the best option.

“The goals of Mr. Biden were better than those of President Trump,” Vera-Franco said, referring, among other things, to Biden’s pledge to unify Americans and to fight global warming.

In hindsight, 2020 was epic for Vera-Franco, a Sacramento-born daughter of hard-working Mexican immigrants.

For the March California Primary, she served as a bilingual student clerk in a Sacramento precinct. The then-17-year-old greeted voters, directed them to voting booths, and guided them to secure boxes where they deposited completed ballots.

Per California Election Code, Sacramento County has employed student poll workers since 1997. The pupils must be at least 16 on Election Day and undergo extensive pre-election training.

In all, the county had 193 high school poll workers for last year’s Primary and 215 for the Presidential Election.

“This has been a wonderful program for student civic engagement and work experience,” Janna Fiori, an official with Sacramento County’s Department of Voter Registration and Elections said, noting that students work alongside, and under the supervision of, expert Election Officers.

The goal: “To instill a desire in students to … become lifetime voters and … volunteer to work future elections,” Fiori said.

After getting her behind-the-scenes look at how democracy works, Vera-Franco wanted to help voters again in November, but decided not to, fearing COVID-19. That same concern caused her to vote by mail.

Three months after the March Primary, she graduated from Arthur A. Benjamin Health Professions High School, a shining jewel of the Sacramento City Unified School District.

At that school, Vera-Franco joined an after-school creative writing club. The club’s essays/poems were published in professional books by 916 Ink, a nonprofit supported by The California Endowment.

Vera-Franco plans to be a pediatrician. She will watch the televised inauguration in her South Sacramento home, with family.

For more about The California Endowment, visit https://www.calendow.org/places/sacramento/