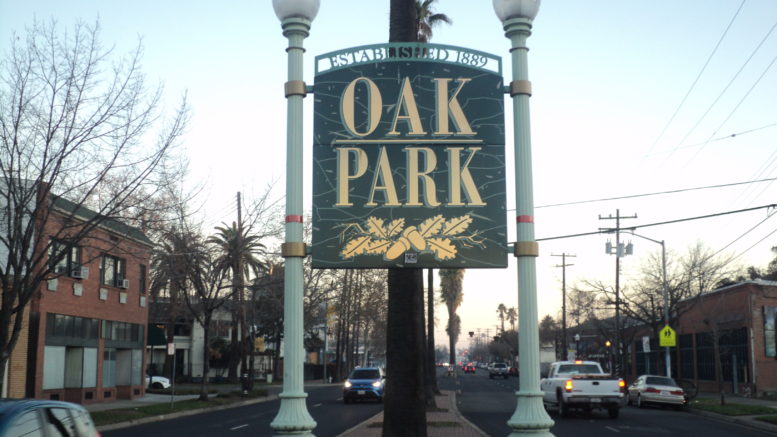 Unable to afford gentrification-caused higher rents, many Oak Park families have left Oak Park in the past decade. A suit charges many more will be displaced without mitigation of the proposed Aggie Square project. Photo by Edgar Sanchez

The news spread like wildfire in April 2018: A site near Sacramento’s Oak Park district had been chosen for Aggie Square, a megaproject that promised thousands of new jobs for the region.

The high-tech research, innovation and education center would expand UC Davis’ presence in California’s capital, with the university and the City of Sacramento leading a public-private partnership to develop it.

For many Oak Park residents, the colossal endeavor—Phase 1 alone would cost $1.1 billion—caused concern. They feared Aggie Square would displace low-income families, not only from Oak Park but from adjacent sectors.

A suit recently filed in Sacramento Superior Court seeks to alleviate those fears by demanding changes to the Aggie Square plan.

The complaint was brought by Sacramento Investment Without Displacement, or SIWD, a coalition born from The California Endowment’s Building Healthy Communities initiative.

The suit accuses the Board of Regents of the University of California of violating state law by green-lighting Aggie Square without properly addressing environmental issues associated with the project, ranging from air quality to housing demand.

According to the suit, Aggie Square would increase UC Davis’ Sacramento campus population from 13,500 to 21,200. As a result, Aggie Square as proposed “will exacerbate existing housing inequities and drive displacement in some of Sacramento’s most historically underserved communities,” the suit adds.

Oak Park has witnessed an exodus of low-income families amid ongoing gentrification. And Sacramento already has a critical homeless crisis.

UC Davis did not respond to an e-mail requesting comment for this story.
City officials have expressed disappointment over the legal challenge, saying it will delay Aggie Square’s construction, which was to begin by June.

Mayor Darrell Steinberg told KCRA-TV Channel 3 that the city and the community—not including the plaintiffs behind the suit—are “working” on a community benefits agreement, or CBA, that would ensure “tens of millions of dollars for affordable housing for the Stockton Boulevard corridor,” plus a local hiring agreement.

The suit seeks to improve parts of the project, but doesn’t seek to halt it, emphasized Erica Jaramillo, an Oak Park resident, state worker and SIWD board member.

She said the suit followed months of fruitless talks between SIWD and the developers, who balked at signing a legally binding CBA that would detail, for example, investments toward affordable housing and how many Aggie Square jobs would be designated for its underprivileged neighbors.

“Because of the filing of this lawsuit, I feel more hopeful about preventing further displacement,” she said.

The nonprofit SIWD includes social justice advocates and equity-focused organizations. The suit was filed by the Soluri Meserve Law Corporation, a specialist in environmental litigation.

For more on The California Endowment, visit www.calendow.org.

Death on the track